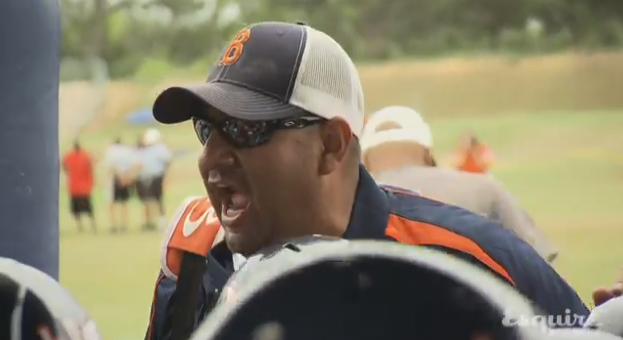 Esquire Network debuted their newest reality show Friday Night Tykes on Tuesday night.  The previews for the show all pointed to one of the more disastrous reality shows in the history of American television.  And that's saying something considering the inherently awful nature of reality shows.  Well, the debut failed to disappoint with shocking behavior from adult coaches and parents pushing children below 10 years of age to inhumane limits.  The series is so troublesome that USA Football has released a statement rebuking Friday Night Tykes and its representation of youth football.

"Youth coaches by nature are role models, and the language and scenes in Esquire Network’s “Friday Night Tykes” are in sharp contrast to USA Football’s core beliefs and what is taking place on the majority of youth football fields across the country. Football and youth sports in general provide meaningful learning opportunities, and it is vitally important that the right individuals have the training necessary to teach our children these lessons.

Understanding there is more work to be done, we are encouraged that the youth football community is embracing coaching standards such as those in our Heads Up Football program. Together with support of experts in medicine, child advocacy and multiple levels of the sport, we work with youth leagues to adopt these standards that bring significant change in how coaches are prepared, players are taught, parents are informed and safety is addressed."

The Twitter feedback for the show was just as negative with former players, sports media personalities, and fans tweeting about the horrific nature of the show.  Whatever the motives of Esquire Network in televising this abomination, it seems to be the best possible advertisement against youth football.  As always these are Real Tweets from Real People…

Watching Friday Night Tykes a stunning abomination, an indictment on what’s wrong with football and the state of Texas

I'm not sure what Friday Night Tykes is going for but it comes off like a tragedy. These coaches need to get a life and a grip.

These coaches in "Friday Night Tykes" are all sorts of crazy. Reinforces my belief that peewee football is absurd. #esquirenetwork

I'm an hour into #FridayNightTykes and I haven't seen one coach correct a player from tackling with their head down.

This @ESQTV show on youth football is basically child abuse. I can't believe what I'm seeing…

#Fridaynighttykes I am at a loss for words.

#FridayNightTykes is probably the most disappointing show I have seen on TV in a really long time.

I wonder if Roger Goodell is watching #fridaynighttykes

"You should be ready to rip their heads off on defense, that's Outlaw Football." #fridaynighttykes

If you would like to lose faith in humanity and be terrified for children's lives all at the same time, may I recommend #FridayNightTykes ?