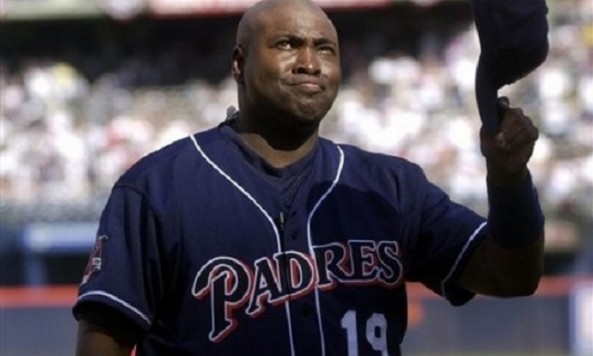 At this point, virtually every pro and college team employs sports media trainers to work with athletes on dealing with the media.

Future lessons now should include sharing all the personal stories of baseball writers on their relationships with Tony Gwynn.

It is hard to recall such an outpouring of affection–yes affection–from the media toward an athlete. I would be a rich man today if I had a dime for every variation, “He was a great hitter and an even better person” that has been written about Gwynn in recent days.

Above is an interview Gwynn did with a St. Louis outlet on the eve of his 3,000th hit. Note how Gwynn patiently and thoughtfully answers each question in this 11:36 interview, which is an eternity for a big star.

Yesterday, I did a post on writers recalling Gwynn. Bob Nightengale of USA Today wrote:

He was a baseball reporter’s best friend. You could talk to him about steroid abuse in the game to an occasional hitting slump, and he would give you the same courtesy whether you’re from Time Magazine or the Escondido High school newspaper.

Tyler Kepner, now with the New York Times, underscored that point with this memory:

I was a teenager when I first interviewed Gwynn, working for a small magazine I published from home. This was not Sports Illustrated or ESPN. He had no special reason to be nice. But every time the Padres came to town, Gwynn would greet me warmly.

He noticed things others would not. One time we spoke, I was wearing a Vanderbilt golf shirt. Gwynn noticed the logo and asked if I went there. When I said yes, he lit up. The Padres beat writer Buster Olney, of The San Diego Union-Tribune, also went there, Gwynn said excitedly. “You’ve got to meet him!” he said.

Pause for a moment to consider how rare this is. Few players would bother to notice a detail on a reporter’s shirt. Few would know which college the team’s beat writer had attended. Fewer still would then offer, with genuine enthusiasm, to play matchmaker.

But that was Gwynn. When our interview ended, he went back to the clubhouse, found Olney and brought him to the dugout to meet me. A few years later Olney was writing for The New York Times, and he recommended me for a job. Gwynn had set me on my career path.

Perhaps Gwynn stood out because he ran counter to what the media experiences in the locker rooms, especially among the big stars. Too often, they are inaccessible and uncooperative. For many, interviews are a necessary evil.

Say what you will about Barry Bonds, but the perspective on him might be a bit different if he wasn’t such a jerk to the media.

To be fair, few athletes are wired with the same kind of outgoing personality as Gwynn. He truly loved people.

Yet every athlete can follow his lead and treat the media with a basic level of decency and respect. Gwynn showed the power of nice goes a long way. It builds equity with the media that truly is invaluable.

I never had the pleasure of meeting Gwynn. But as a member of the media, I felt a connection because of all of the accumulated memories from reporters that have poured out about him..

Gwynn’s power of nice eventually became part of his legacy as much as his .338 career batting average. As they have written, a remarkable hitter and a remarkable man.