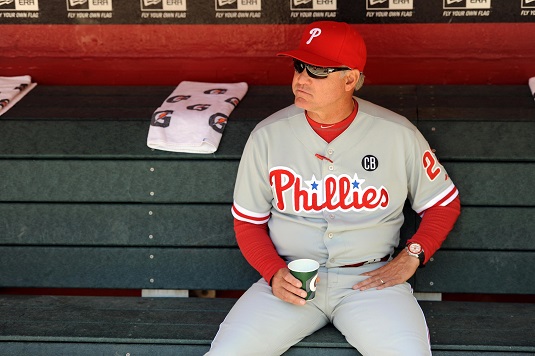 Earlier this week, Phillies manager Ryne Sandberg revealed that he was stricken with a case of food poisoning after eating a burger from the Shake Shack at Citi Field. Naturally, that led several LOLMets comments and memes, which you’d fully expect from this situation.

Phillies blog (excuse me, bolg) Zoo With Roy took things a step further, crafting a hilarious, clearly fake, letter by Sandberg about the incident. The letter was pretty clearly tongue in cheek, as it featured Sandberg describing his bowel movements and several comparisons of the Shake Shack management team to that of the Phillies.

Enter Darren Rovell. ESPN’s business reporter actually got the Phillies to confirm that the very fake letter was in fact not real.

Phillies say letter posted by Philly blog from Ryne Sandberg to Shake Shack about alleged food poisoning was not penned by manager.

Well…. duh. This led to a barrage of tweets pointing out the obvious and filled with disbelief over the fact that the Phillies were led to actually respond to satire.

@darrenrovell you mean the one titled "here's a fake letter Ryne Sandberg wrote about his diarrhea!"
Thank you for clearing that up Darren

@darrenrovell wait, you mean the letter that was clearly a joke comparing the Phillies roster to a disease-infested meat patty wasn't real??

@darrenrovell EXCELLENT reporting. Keep up the good work! I was certain it was real, what with the LOL and all.

And what about the source of the letter, Zoo With Roy? Well, he fired back in a way that only he could – by unearthing some of his most ridiculous posts from the past (directed towards Rovell) and confirming that yes, they weren’t real.

Just a reminder that I'm not an actual source of news – I run an absurdist website called Zoo With Roy dedicated to silliness.

.@darrenrovell ALSO WORTH NOTING that the 2010 Phillies weren't in fact Muppet Babies (http://t.co/2UuHRkRDvj)

.@darrenrovell Michael Martinez is not dead, and his corpse wasn't in photo shoot of the model you proposed to. http://t.co/9IFMLTF5ig

.@darrenrovell This is not actual footage of Ben Revere meeting Cliff Lee: http://t.co/mW2XjI5DSO

.@darrenrovell ALSO: Ruben Amaro was not on the $125,000 Pyramid and Pat Burrell did not boink Markie Post (maybe) – http://t.co/M2aoQHBLmC

BOY DID HE EVER http://t.co/6Zo805BKOg RT @nepa_2_philly Hey @zoowithroy did TJ Oshie really ride an American eagle I'll hang up and listen

Guys, a red panda did not escape from the zoo and party with Kim Kardashian, Dirk Nowitzki, and Allen Iverson: http://t.co/3bavc1x7ii

Phew, at least this is all cleared up now.