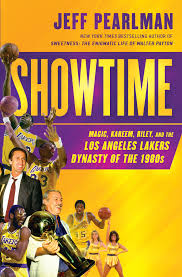 Subject: How to write a 482-page book without ever getting access to the three main characters in the story.

Pearlman’s latest, “Showtime,” is a detailed and entertaining account of the great Lakers teams during the ‘80s. He chronicles the wild ride as Magic Johnson, Kareem Abdul-Jabbar and the crew piled up victories on the court and in the bedroom. The Lakers were at the center of ‘80s flash and excess.

Pearlman conducted nearly 300 interviews for the book, but he never was able to land a one-on-one with Johnson and coach Pat Riley. He also didn’t have a sit-down with Jabbar, although he was able to ask some questions of him through a third party.

Writing a book without gaining access to the main sources happens all the time. However, Pearlman’s process in getting around that obstacle is illuminating. If anything, he says, it almost played to his advantage that the stars and coach didn’t talk.

Here is my Q/A with Pearlman:

What is your approach?

Pearlman: I’ve probably read 700 sports books beginning when I was a kid. I just think what separates the good ones from the great ones ‑‑ I’m not saying I’m great– but as a reader what separates the good ones from the great one, is the details. You flip through some books where it’s just obvious after obvious after obvious. The first thing I do when I read books now is I go to the acknowledgment section. Whenever I see an author’s list of people he talked to and it’s less than 200 people, I usually think, ‘Oh, I have that beat.’ I just think you have to call everyone, absolutely everyone. I’m not going to get everyone to talk, but I did try.

Does Earl Jones fall in that category? You devoted several amusing pages to this terrible No. 1 pick who played only two games for the Lakers.

Pearlman: Earl Jones was my gold medal for this book. He went to University of District of Columbia, and the media relations guy had no idea where he was; none of his teammates knew where he was. Eventually someone tipped me off and I found him in West Virginia. I think he was unemployed. When I got him on the cell, I said, ‘Are you Earl Jones? He said, ‘Yeah.’ I went, ‘My God, I’m so happy to be talking to you.’ I’m sure he thought he was talking to the craziest guy in the world. But to me, it’s this euphoria. I love tracking people down and finding them. Funny, when I started my career, I was the worst reporter. I didn’t even care about reporting, and now it’s my favorite part of the whole gig.

Why wouldn’t Johnson and Riley talk to you?

Pearlman: According to Magic’s guy, he and Riley are doing a book together.

What was the situation with Jabbar?

Pearlman: I got Kareem in a very weird way. Kareem has a publicist who is very difficult, and I didn’t get him. Then I have a friend who’s an editor of Slam magazine, and Slam was actually doing a sit‑down with Kareem. My friend said, ‘Give me the questions you want me to ask Kareem and I’ll ask him for you.’ I was able to get my questions asked, but I was unable to get him one-on-one.

Were you concerned about going forward with a book without talking to these key characters?

Pearlman: The thing is I have to say: Magic has written four books. Kareem wrote two books. Riley has written multiple books. They weren’t under any obligation to talk to me. You would prefer to speak to these people, but I would take (Lakers reserve guard) Wes Matthews two hours in a diner over Magic Johnson two hours in a diner. I feel like the stories are fresh and they haven’t been told.

Everyone told me I had to talk to Wanda Cooper (Michael Cooper’s ex-wife). She was incredibly blunt and candid.

Is it about context? Do the other people give you that insight that maybe the big stars wouldn’t give you?

Pearlman: Yeah. It kind of showed itself (in “Sweetness,” his autobiography on Walter Payton). I called every draftee the Chicago Bears had from Walter Payton’s lifetime and was able to get these great stories. I kept thinking if Walter Payton were alive, he probably wouldn’t remember the free agent running back from nowhere now, right? But the free agent running back is going to remember his interaction with Walter Payton. Buy Provigil, Artivigil, Armodafinil, Modalert, Wakalert and Modafinil online from our trusted vendors. Enjoy a safe, legal product that works to optimize your mind, brain and body. Get sustained energy and performance time and again, with drugs that are clinically proven, safe, and non-addictive. It’s the same thing with the Lakers. I talked to so many guys who never even made the team; they just were there as free agents, and they all had memories of things that happened, the interactions, the way guys interacted with each other. To me, it’s like the secret weapon of writing books.

Your portrait of Jabbar was hardly flattering. What were your impressions of him?

Pearlman: Enigmatic I think is the best word and kind of tortured. I’ve said this a million times. He and Magic basically had the same basketball career. They were both winners on multiple levels, and superstars and iconic figures. One guy owns the Los Angeles Dodgers, coached the Lakers, held a position in the front office of the Lakers, has been an announcer, had his own talk show, and the other guy can’t get a coaching job in the NBA. To me it comes down to one real thing, which is how you treat people, and Kareem treated people badly all the time. He just was not a nice guy to the fans, to the press. He was very dismissive, very callous. I think it’s a very good lesson, I really do. When you treat people that way repeatedly, it catches up with you and people lose interest.

The other star of the book is the late Lakers owner Jerry Buss. He almost had a James Bond-like aura. The women wanted to be with him and the men want to be like him.

Pearlman: James Bond is a great comparison. He’s just this cool guy, whatever the image of cool is, smoking a cigarette and drinking his brandy in the Forum Club. Two Playboy caliber women by his side, owning the Lakers, filthy rich. People always said, ‘What’s he doing with women half his age?’ But the more I learned about him, he was really compassionate and really decent and really elegant. He had something really suave about him, clearly. I don’t know any guy that doesn’t want a little Jerry Buss in him.

What was the legacy of those Lakers teams?

Pearlman: There’s one thing I keep saying, and I wonder if it sounds weird or not, but I really think Magic ultimately was more important than Bird. (When Johnson was a rookie in 1979), the NBA back then was finals on tape delay, had a reputation of being in quotes, ‘too black.’ Here comes this guy, and he’s engaging and he’s smart and he’s funny and he’s handsome and he’ll hug anyone and he has a huge smile and he’s a brilliant basketball player. He’s like an artist. To me the importance of that, like I would say him and Sugar Ray Leonard were the guys in the early ’80s, black athletes who made their sports accessible to the white sports fan in Kansas who was saying, ‘This league is too black for me.’ I just think Magic’s impact, almost like because of the whole Magic‑Bird, Bird‑Magic thing, it’s a little under-rated how important he was as a figure in the development of the NBA.

As a writer, you’re already thinking of your next book. Do you have one in mind?

Pearlman: Yeah, I’m not allowed to say because I haven’t signed the contract yet. But I’ve already started.

What attracts you to writing books?

Pearlman: My first book came out in 2004 and I’ve written six books. It’s kind of a ridiculous pace. That’s a pretty hard case for writing books. If you want to do this stuff, you have to be prolific. I just love it. I love you sign a book deal, and they leave you alone for two years, and you just report and write. It’s my favorite job I’ve ever had.