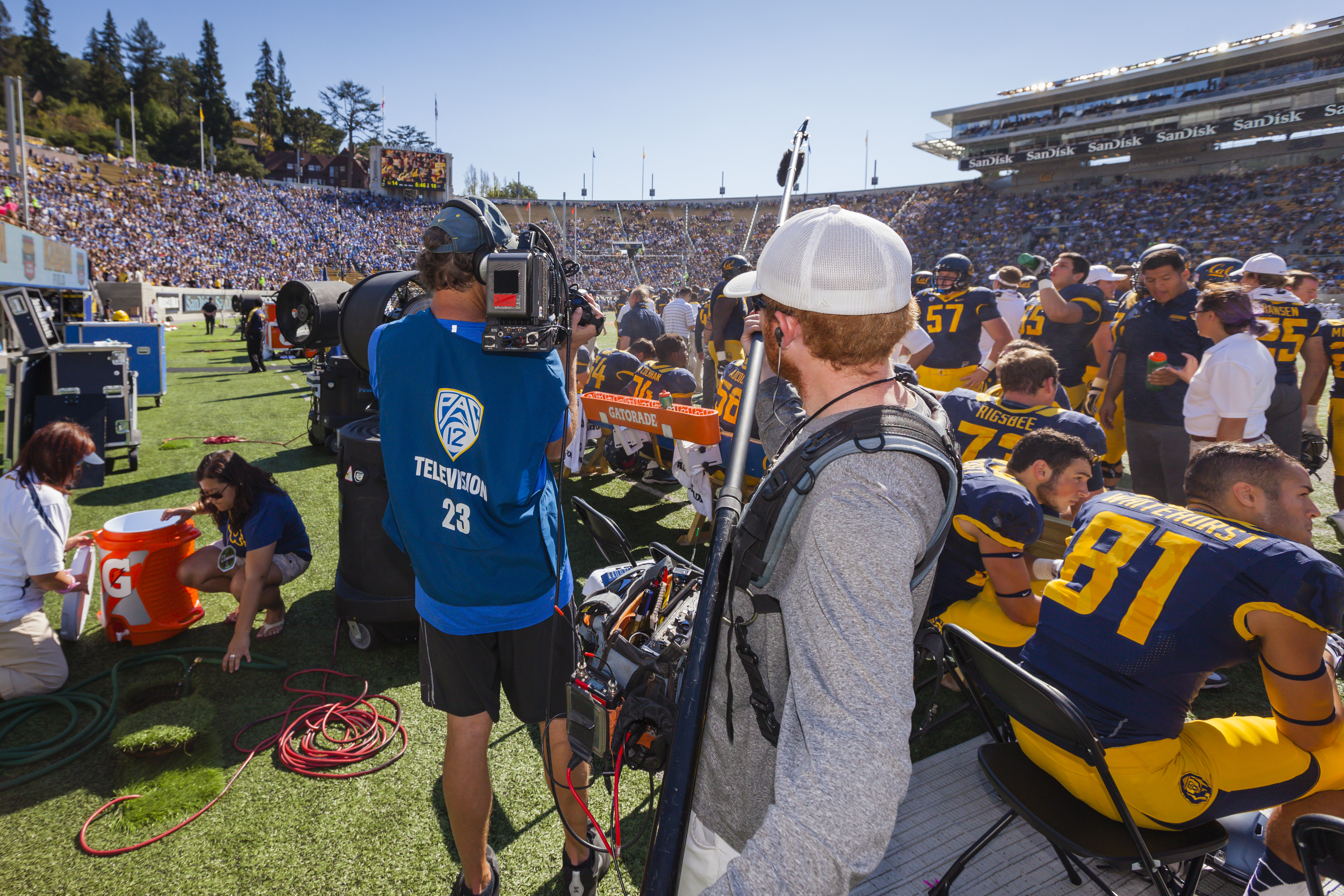 All Access documentaries and series have mostly been double edged swords. Often winning awards and critical acclaim, the reality is that they typically attract niche audiences that make it hard to turn a profit given the heavy costs of production.

Recently Undefeated won the Oscar for best documentary in 2012, yet only brought in a half million dollars at the box office. Hard Knocks continues to thrive albeit with the backing and production of the NFL and NFL Films and monetized via a premium cable subscription. The NHL recently couldn’t make 24/7, its own all access show, work on HBO and hence it will be relocated to Epix. MLB partnered with Showtime for a couple of seasons with The Franchise which performed so poorly it was scrapped before the end of the season. HBO and Showtime have some fantastic all access boxing shows for major fights, but really it’s more of an effective PPV marketing campaign and hence the economics of producing them tend to work better.

So it’s a bit peculiar that upstart Pac 12 Network has taken the plunge here with The Drive even as they still fight for distribution with DirecTV. Last year the all access show focused on two different programs in California and Arizona State, programs on totally opposite ends of the spectrum with Cal losing their last 10 games and ASU winning the Pac 12 South. This year, The Drive is only focusing on one team with UCLA. We were curious about how the show was produced and sent friend of the site Joe Guzman, a UCLA alum to get an all access look at the production of an all access show. Below his look at gameday production of The Drive. 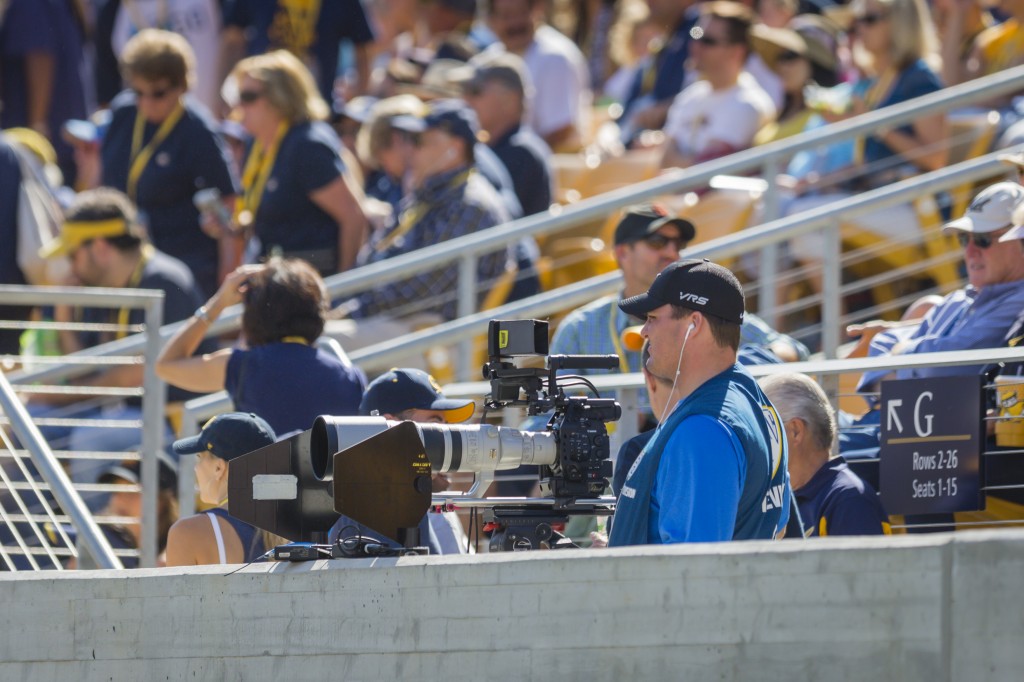 Saturday’s game against Cal was on ABC or ESPN2 depending on what part of the country you were watching from. That meant there were no shared resources between the game production and The Drive’s production operation. So how many cameras does it take to shoot footage only to be used in a 10 minute segment of a 30 minute show?

As it stands, there is no exact number. For example, when UCLA played Oregon, there were 6 camera operators. For the Cal game, The Drive had 8 cameramen. When I asked how it was decided whether to have more or less cameramen, I was told it was a decision made by the producer.

Regardless of the number of cameramen at a particular game, they always have specific responsibilities. For the Cal game, two of the cameramen were assigned to focus on each team’s Head Coach from a fixed position on the opposite sideline. This assured that the show would have every reaction by each Head Coach on every play. Two other cameramen were assigned to capture the game’s action with free standing cameras. In addition, the show allocated three cameramen, known as weasels, to capture all shots that occurred off the field of play. Finally, the show’s producer was tasked with capturing all the sounds that would bring the game to life. When the responsibilities were initially rattled off to me, I figured that the show’s producer had chosen to capture sound so that he could also make sure he was getting all the shots he wanted from the various guys. Little did I know that it is the sound of a game that really creates its picture. 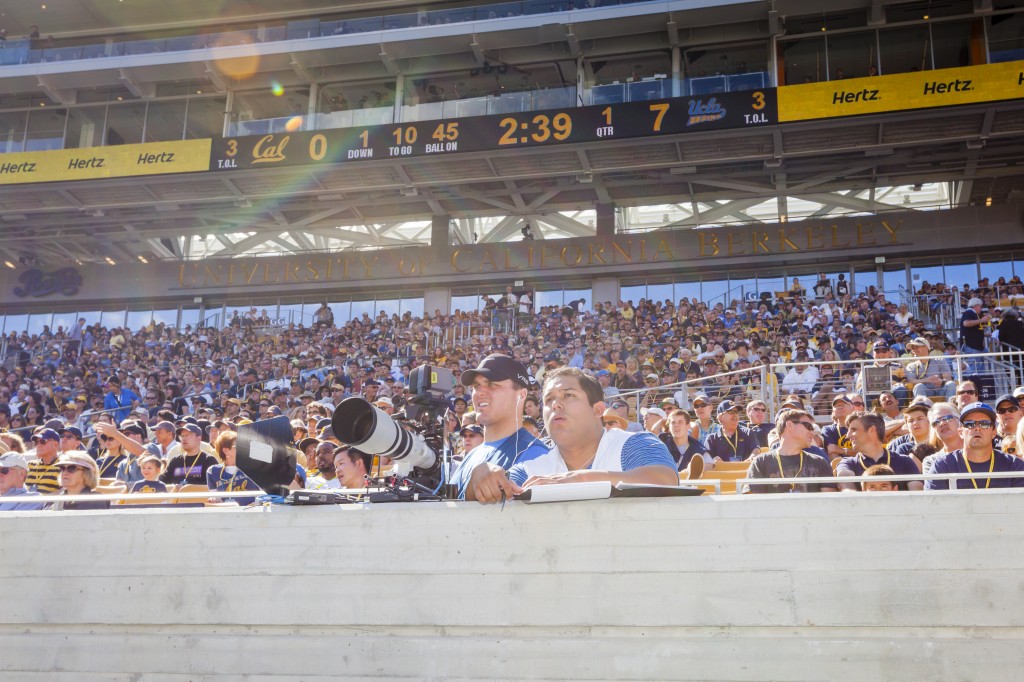 I was told only once before has a college football game had both head coaches mic’d up for a game and that was when UCLA played Arizona State. Today that would be the case as it seems both head coaches from last year’s season of The Drive were comfortable with participating with the show’s production team this year as well.

Initially I started listening to Cal’s offensive coordinator, utilizing a listening device from one of the cameramen. It was quite interesting to hear his his reactions, thought process, and such but as I quickly became hooked, I had the urge to listen to the head coaches and upgraded to get my own earbuds.

I now had Coach Dykes in my left ear and Coach Mora in my right. Dykes screamed at the refs for not giving him enough time to substitute while Mora is yelling “Let’s go, Let’s go!, LET’S GO!!”. I could close my eyes and see the game perfectly. The cocoon of sound these coaches created for me for the next three plus hours showed me exactly why the Drive’s producer, Jim Jorden, chased the perfect audio from the game. Sound tells the story. 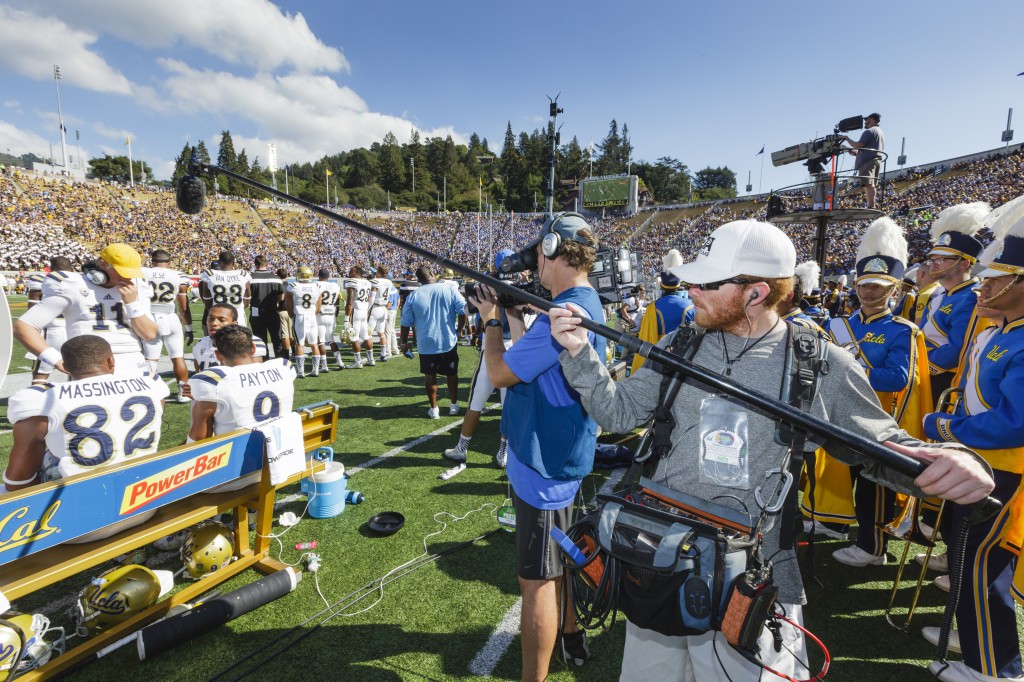 From my vantage point, Jorden’s experience was clearly a key ingredient that allows the network to produce such a high quality show without the backing of a major network or larger production team.  Jorden has worked for NFL Films and been a part of several programs such as Inside the NFL, NFL Films Presents, This is the NFL, the Road to the Super Bowl, and Hard Knocks. In addition, Jorden has worked extensively for NASCAR and NHL in behind the scenes style programs.

I was beginning to get a good feel of gameday production for the show but felt like the little boy in Jurassic Park when first meeting Dr. Grant as I had hundreds of questions for Jorden.

“What happens to all your game footage?” –  Each cameraman creates a 30 minute “Best Of” reel of their own footage and turns it in. Jorden then finds the audio and footage that tells the best story.

“What happens after you’ve made your first cut of the show?” – The Pac 12 network reviews the show on Sunday. After the Pac 12 network signs off on the episode, it goes to each Head Coach on Monday. If the coaches okay the episode, it goes to post production on Tuesday to be ready to air on Wednesday. (Note: only ~10 minutes of each 30 minute episode is from the game. The other 20 minutes is usually split between a human interest story and practice and meetings footage so a portion of the show is already in the process of being edited before gameday.)

“What is your goal with making the Drive?” – To discover and highlight the character of the team featured during the season.

“How did the show come to fruition?” – Jorden was working one of the greatest upsets in college football in 2007, when Appalachian State beat Michigan. It was during this game that Jorden, who had previously worked mostly NFL games, saw a similar level of passion and fan interest at the college level. Jorden realized that just like Hard Knocks told the story of a NFL team during the preseason, the model could also work following a college team.

Where Does The Drive Go From Here?

Pac 12 Network has plans on shooting a Drive style program for basketball. He also said that a third season may explore having three teams featured in an hour long format. When I asked whether there were any plans for expanding the show to follow a team year round, Jorden said that he has considered the idea and thinks the show could cover all 12 teams during their offseasons.

I found myself the rest of the weekend a little taken aback by the whole experience. I watched a lot of football that weekend and it didn’t measure up to being so close to the game but more so having the added insight of the audio in real time. Announcers were more excruciating to listen to than normal.

I also found myself annoyed with how many people I shared my amazing experience with who said they looked forward to checking out the show only to realize they didn’t get the Pac 12 Network. The access provided in The Drive is so compelling that it’s hard to think fans outside of the conference wouldn’t find it enjoyable. It’s why we watch Hard Knocks regardless of what team is featured. I left hoping that this level of access would become more common in terms of how sports are covered as it adds so much personality and added depth to something that we already love and obsess about. Whether that comes to fruition remains to be seen, but hopefully over time this becomes more of a reality rather than what seemed like a surreal dream I experienced on Saturday.