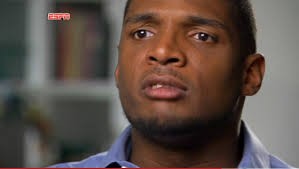 I was contemplating taking a nap when a curious tweet popped up in my timeline. It was from an ESPN PR executive saying to turn to ESPN2 now for Breaking News. I turned on my office TV and flipped over dismayed to see more coverage of the Marcus Smart push heard around the world.  Was this the "Breaking News" I was promised as I've poked fun of how ESPN has used that tease in the past.

And with a simple graphics change, there it was. Breaking News:  NFL prospect Michael Sam is gay.

A million questions flooded my mind. Would this be like Jason Collins in which he wouldn't play in the league as an openly gay athlete? Who knew? What was his draft stock like?

ESPN answered those questions fast and furiously in a very tightly packaged block of features and analysis. Interview with Sam? Check. Draft analysis with the usual suspects? Check. Mark Schwartz was even at Missouri having already interviewed those in the know there as well as getting some live reactions to fans not in the know at a local eatery.

At the same time, Sports Illustrated and The New York Times had comprehensive stories and the NFL had a response teed up and ready to go. The Missouri athletics twitter account was prepped and Michael Sam opened up shop on a twitter account that while I write this is picking up about 10,000 followers an hour.  Outsports had a great look at the process of the announcement. It truly was all hands on deck for this story and yet despite of this, this story didn't leak out ahead of the story's imposed embargo.

Howard Bragman has been tabbed as the PR mastermind behind this huge story breaking the way it did. I have to tip my hat to him, Sam, and the media companies' thorough coverage done in secrecy for the impressive surprise unveiling of such a culturally significant story.

More surprising is the fact that Sam told his entire team before the season of his sexual preference and it was not exactly a big secret around campus. That to me is an optimistic bellwether that perhaps the macho locker room of the NFL is ready for an openly gay player. In a day and age where TMZ and Twitter claw for whatever is low hanging fruit for attention, one of the biggest stories of the year was a non-story and the amount of people in the know were in the hundreds and maybe thousands.

The net result was what we see tonight. His story is out and out in a big way. Details, back story, access, pride, etc. Michael Sam wasn't confronted unexpectedly. He did it on his terms. Now he's told the world in a calculated process that has yielded a bevy of positive awareness and reaction.

While I'm confident we'll see more of these stories (gay athletes coming out), you won't see a lot of stories like this one in which publicists and media giants work together in secret holding a sensitive and sensational story from the masses for a well-organized rollout.

As a fan of disruptive new media, it's a bit humbling to see how successful the planning of this story's release has been. Perhaps new school journalism wasn't ready for the handling/shepherding of the NFL's first gay athlete but the bigger question remains – is the NFL ready? The way Michael Sam and his team owned this story, a lot of people who were on the fence seem to have already changed their tune and with that in mind, maybe there will always be a need for a cohesive relationship between old school PR and old school media.

Either way, it's a big story and one that will stay at the forefront for the coming weeks and months. It's been a long time coming and while I'm sure there will be some who make waves for all the wrong reasons, it's good to see such a significant story get out of the gate in such a positive manner. Now to see what unfolds outside of that controlled environment.