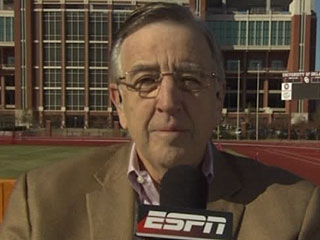 The first domino has fallen in the most intriguing announcing situation in sports.  Today ESPN announced Brent Musburger, whose contract was expiring, had come to terms with the network… to be the lead play by play man for the SEC Network.  ESPN says it’s a multi-year contract for Brent.  Musburger will team with Jesse Palmer to form the new lead announce team for the new network this fall.

“Sports broadcasting legend Brent Musburger will be joined by college football analyst Jesse Palmer in the booth every Saturday on the SEC Network when it launches next fall. The Hall of Fame sportscaster and the former Florida quarterback have each reached an agreement with ESPN to be the lead college football game commentators on the new network. The pair will kick off the season with Texas A&M at South Carolina on the SEC Network Thursday, Aug. 28.

“Brent Musburger is a cultural icon who has been guiding fans through many of sport’s most spectacular moments for decades,” said John Wildhack, ESPN Executive Vice President, Programming and Production. “His big-game performance and unmistakable style will elevate our football coverage on the SEC Network. Serving as the definitive play-by-play voice for this major network launch represents an exciting new chapter in his legendary career and reinforces our commitment and investment in the SEC Network.”

It had been known for some time that ESPN was going to move Musburger aside and out of the top college football booth alongside Kirk Herbstreit.  No matter how much ESPN can try to soften the landing here, this is a step down at the end of his career for Brent Musburger.  For the first time since ESPN/ABC took over the BCS in 2010, there will be a new voice for the championship game.  Even though Musburger is still at the top of his game at the age of 74 (he was very good in the BCS National Championship game in January), ESPN has decided to go in a new direction for the 2014 season and the first year of the college football playoff.  It’s unfortunate, because Brent’s pairing with Kirk Herbstreit was still one of the most enjoyable pairings in sports broadcasting.

So the number one college football announcing spot is finally, officially, open.  Will it be Chris Fowler?  Will it be Rece Davis?  Will it be someone else currently off the radar?  Whoever it is, more dominoes are sure to fall.  And soon.