This has not been officially announced by the National Football League, but it was broken on Sunday by the Tennessee Titans Twitter account:

The Oct. 26 #Titans–#Texans game will now be televised on FOX instead of CBS as part of #NFL's "cross-flexing." Kickoff remains at noon CT.

The other unique quality about this particular Sunday is that the NFL has quietly pulled its second crossflex of the season. Its first was in Week 6 when the New England at Buffalo game was switched from CBS to Fox and Chicago at Atlanta was moved from 1 p.m. to 4:25 p.m.

For October 26, the NFL has done a little tinkering in the 1 p.m. window, giving Seattle at Carolina to CBS while shuffling Houston at Tennessee to Fox. Both CBS and Fox will still air four games in the 1 p.m. window. Had the slates remained the same, Seahawks-Panthers would have been buried under Fox’s lineup which includes Pats at Bears. This way, CBS gets an improved schedule and Seattle-Carolina gets a bigger audience than if it had stayed with Fox. In addition, CBS stations in Seattle and Charlotte get a rare opportunity to air the home teams.

For Fox stations in Houston and in Tennessee, the same opportunity arises in airing the AFC game there locally.

Seattle-Carolina becomes the first all-NFC matchup on Sunday for CBS dating back to 1994 when it lost the NFL contract to Fox. It is scheduled to have at least two more all-NFC matchups in Week 12 on November 23 when it has Washington at San Francisco at 4:25 p.m. and again on Thanksgiving Day when it airs Chicago at Detroit at 12:30 p.m.

So if you’re confused by all this, we have the schedule for you below. 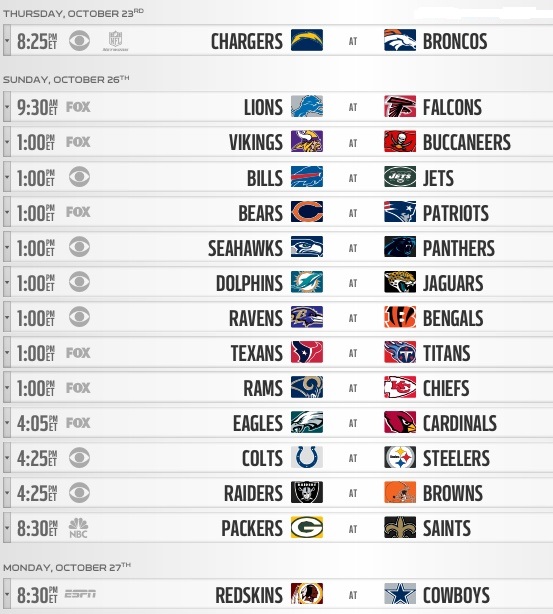 Under the new NFL TV contract that took effect this season, there won’t be another crossflex until Week 11. At that time, any game can be crossflexed between CBS, Fox and NBC. As usual, we’ll keep you updated on any changes to the Sunday NFL schedules.