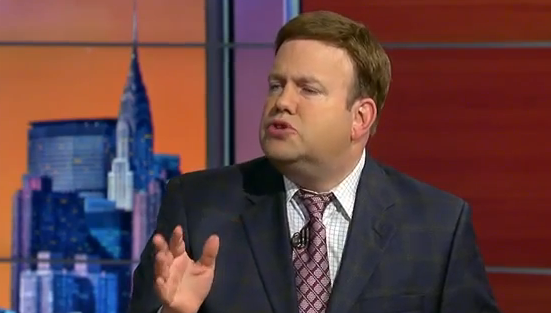 Well, we can finally take Roger Goodell’s picture off the milk carton.  The embattled NFL Commissioner made his first public appearance in nine days to hold a press conference and take questions on his failures to lead the NFL through this crisis of confidence and the many mistakes he has made as the grand dictator of the league.

Goodell offered no clear answers to what exactly he was going to do to fix the mess that he had made, was boxed in repeatedly by reporters from Rachel Nichols to TMZ, and had his press conference crashed by someone from the Howard Stern show.  This was far from a public relations victory.  Whatever test Goodell was up against today, the consensus was that he failed.  Handily.

Not everyone saw it that way.

Over on Fox Sports 1, their “communications expert” Frank Luntz had a different take.  Luntz called it “language perfection” by Goodell, which is exactly the kind of thing you’d expect him to say.  Luntz was glowing about Goodell’s performance, saying, “I couldn’t have done it as well as he did.”  (For the record, Fox’s Pam Oliver also went against the grain as an outlier by being very complimentary of Goodell.)

Interestingly, Luntz also had to offer a disclaimer that he had worked with the NFL and its teams, although he didn’t offer any specifics on just how extensive that relationship truly is.  The details of that relationship shows a major conflict of interest that makes it baffling why Fox Sports 1 would think he could offer an unbiased opinion on Goodell’s presser.

During the 2011 Lockout the NFL hired, you guessed it, Frank Luntz to assist in their public relations campaign during their dispute with the players.  Specifically, Luntz worked on developing keywords and phrases that might bring more sympathy to the league’s position.  Luntz did something similar for the NHL during their lockout.  From Sports Business Journal:

For that reason, the NFL and NFLPA have sunk tremendous time and resources into message control during the work stoppage. The NFL has recently hired Frank Luntz, a leading Republican pollster with expertise in developing phrases that resonate with the public, like Newt Gingrich’s famed “Contract With America,” and the players have hired Phil Singer, a veteran political consultant who worked on Hillary Clinton’s 2008 presidential campaign. The high-profile hirings underscore what’s at stake for each side.

In 2012, Luntz appeared on ESPN’s Outside the Lines under the label “NFL Consultant.”  When asked by Bob Ley to explain his exact role with the NFL, he avoided the question entirely.  Luntz has also reportedly worked recently with the Washington Redskins in helping them deal with their nickname controversy.  A ThinkProgress report brings to light a Luntz Global survey that asked fans about not just the Redskins, but their opinion of Roger Goodell:

An email survey meant to judge the interest and eligibility of potential participants includes multiple questions about the NFL generally, including how many games they watch and attend. It also asks about their “overall opinion of the NFL right now,” their “overall opinion of the NFL Commissioner, Roger Goodell,” and what they perceive as the “greatest problem or challenge facing the NFL today.”

Five questions in the survey ask directly about the Redskins. “Which of the following best reflects your opinion of the NFL team name ‘Washington Redskins’?” the 20th question asks, offering “I find the name offensive and they should change it” or “I don’t find the name offensive and they should keep it as is” as the possible answers. The next question asks respondents, “In a word or phrase, please describe the ownership of the Redskins.”

Luntz’s endorsement of Goodell today reeks of a massive conflict of interest.

Is it really just a coincidence that Fox Sports 1’s communications expert, who has previously worked for the NFL on crafting language, thinks the NFL commissioner exhibited “language perfection” today???  How do we know those phrases used today weren’t straight from the Luntz Global playbook?  This isn’t the first time Luntz has fallen in love with one of Goodell’s apologies, either:

Luntz’s close ties to the NFL and to Roger Goodell should have been explained in further detail to Fox Sports 1 viewers.  Actually, Luntz should not have been on the air at all.  And it’s a discredit to Fox Sports 1 and their legitimacy that he was.  How is Luntz and this massive conflict of interest supposed to help this network gain some much needed credibility as a viable alternative to ESPN?  While ESPN is sending out wave after wave of analysts offering strong critiques of Goodell and the NFL, Fox featured a man who has been on Roger Goodell’s payroll to help him perform in the exact situation he found himself in today.  The fact that Fox Sports chose to put Luntz on the air to analyze Goodell’s performance on one of the most important news days of the year is a stunning lapse of judgment.