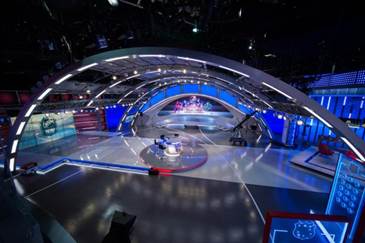 The “reinventing” of Hockey Night in Canada will be a process in constant evolution that may not be settled for many months or even years. We will surely see new personnel, new technology, new graphics and who knows, maybe they’ll build another crazy future world of a new studio. The show is a ship at sea that hasn’t yet found land.

All that said, it looked familiar despite many of the promised changes. That’s both a good thing and, in certain spots, a very bad thing.

First, we go with the good and old: HNIC senior producer Sherali Najak (who came over to Rogers) maintains the world-class, first-rate productions that made CBC renowned by fans both north and south of the Canadian border. The games look fantastic, from the marquee match ups in Toronto and Vancouver to the lesser games in St. Louis and Tampa Bay. Everything is sterling, the camera angles are well placed, you never miss a minute, and you always get excellent replays. That was the one aspect of Hockey Night I’d argue to never mess with and one that, thankfully, wasn’t.

Speaking of camera angles, I’ll have more on this in a couple of days, but how great does that sky-cam look during the Toronto telecasts? I am so impressed with how three-dimensional that makes set plays in the offensive zone look, like this one. If I were Gary Bettman or Scott Moore or John Collins or whomever’s in charge of such things, I’d get one in every single rink. Ref-cam… I’m still 50/50 on.

The lead commentary team remains the silky-voiced Jim Hughson, the nondescript but solid Craig Simpson and Glenn Healy, a man I remain convinced hates the sport. They are fine, though I would argue Healy’s style — think a polar opposite of Pierre McGuire in terms of enthusiasm and opinions of players — detracts from the proceedings quite a bit. Elliotte Friedman joked and got knowing laughs regarding Healy’s dour nature later in the show.

Coach’s Corner returned, though it is now five minutes in length, where the segment used to last seven. If you thought Don Cherry complained about how little time he had before, a good 30 seconds is spent on it now. Whenever he isn’t incoherently babbling xenophobia and praising the Toronto born-and-bred players that the Maple Leafs apparently refuse to draft, he’s talking about how much time he has left. You wonder if Don will put up with that for a full year.

Also, though it wasn’t called as such by name, a segment resembling the traditional rumors and scuttlebutt section Hotstove appeared during the second intermission. Friedman remains very good, a calming, clever presence on television even if his best work remains his weekly 30 Things column. Damien Cox is his partner, and if you’re American, you may know him as the man who wrote this ridiculousness where he basically tried to hand hockey fans a suitcase full of hush money, only to find out it came from a Monopoly set. He was fine paired with Friedman, though he too tends to appear on the dour, “do you even like hockey?” side.

Let’s get on to what was new. There was a new pre-pre-game show, Hockey Central Saturday, hosted by the excellent Jeff Marek. It’s an enjoyable, breezy hour that whips around the game sites of the 7 p.m. ET telecasts, kind of an extend version of what Fox would do in about five minutes on their NFL pre-game shows. A little too much time spent pimping the brand new Hometown Hockey night, but you have to pay the bills somehow.

There was an opening montage, altogether different from the CBC ones that Tim Thompson got the constant adoration for. It was written by famed sports columnist Stephen Brunt and read by the immortal Dick Irvin, Jr. I’ll listen to Irvin read off a menu, but the whole thing felt a little too overly simplistic. That said, it’s no secret that we love Thompson’s montages around these parts, so I’d argue there’s little they could’ve done that would’ve drawn universal acclaim. A cheap imitation? Insulting. So we credit them for trying something new, even if it didn’t quite work for me.

George Stromboulopoulos is the new host of Hockey Night. He was… fine. He seemed a little out of his element in the discussion segments, wasn’t really there to give his opinion, but set everyone up fine. His interviews (a taped feature with Sidney Crosby and a live hit with Mark Messier) were clearly more in his element and generally pretty entertaining. I’d give him time.

As I said, Stromboulopoulos’ job is to set people up rather than give opinions, which Ron MacLean famously never shied away from. Whom he set up was another thing. Friedman and Cox are fine, but Nick Kypreos is an analyst who doesn’t do much for me. He’s the type of analyst that throws around stuff like “Now that we’re in this new world of concussions…” and “Christian Ehroff’s not a brave player…” as if they’re generally accepted truisms.

That said, they weren’t wholly without good ideas. A segment that featured both Kypreos and Messier — who has long been very dull on television — explaining the new face-off rules entertained as much as it informed. So maybe a turn toward that direction rather than spitting out hot takes would be a good idea for the show, which is making good use out of its gargantuan studio.

The new 10 p.m. ET broadcast team (or at least for this week it is) consists of Paul Romanuk and Mike Johnson. Romanuk — who left Canada after years as TSN’s top NHL guy for England for nearly a decade — hasn’t missed a beat, and is a real pleasure to listen to, though as some pointed out, he missed a few names. I didn’t mind or notice, to be honest. Paired with Johnson — one of the league’s best up-and-coming TV presences — they’ll make a lot of fans working out west in that late game.

One thing I did miss, however, was After Hours. The show, which always aired after the 10 p.m. ET game, was hosted by Scott Oake (now the sideline reporter on the A-game at 7 p.m. ET) and featured a live sit-down (often in front of a crowd) with a player from that night’s late game. It was light, fun, and often caught players being interesting for a change. For a network so concerned with building up and telling the stories of the game’s greatest stars, it’d be nice if they thought to bring that back as a way of doing that.

Like I said, though, this is going to be a long-evolving process. Things will not look the same this week as they do next week. Or next month. Or next year. For now, this Hockey Night in Canada remains (and better yet, found new ways to be) excellent in function, but with some of the same old hiccups in fashion.