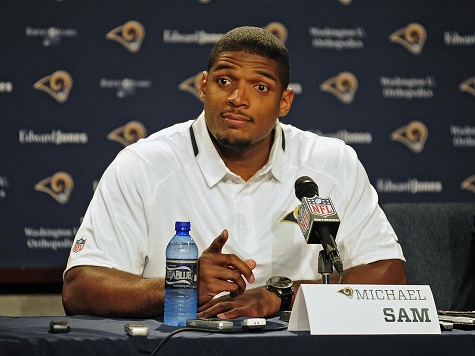 There were two vastly different themes in televised draft coverage of Michael Sam this weekend, Sam as a football player and Sam as the first openly gay NFL player. Both are legitimate angles, and deserving of coverage, but they led to a difficult line for ESPN and the NFL Network to walk. Sam’s story was much more interesting and relevant to a casual fan (or even to non-football fans tuning in to see history made) than that of a typical late-round pick, so it’s tough to fault the networks for spending much more time on him than most other players.

At the same time, though, Sam had to be evaluated as a football player, not just as a historic figure; that matters for discussing where he would go and projecting his future success (or lack thereof), and it was relevant to those who were watching the draft primarily from a football standpoint. By and large, both ESPN and NFLN did a good job of balancing those aspects of the story. Hopefully, though, discussion of NFL prospects’ sexual orientation will become a much smaller (or non-existent) part of coverage now that Sam’s broken that barrier.

While finding that balance between the two angles on Sam can be difficult, ESPN and NFLN largely pulled it off; they spent most of their time talking about Sam breaking down his skills as a football player, but devoted much more time to him than the typical late-round prospect. HBO’s John Oliver broke this down perfectly in his opening segment on Sunday’s Last Week Tonight, which sadly hasn’t been posted to the show’s YouTube channel yet. Here’s a transcription, though:

“History was made this week. Technically, history is made every week, that’s part of how history works, that’s not the point. Last night, a particular kind of history was made.” [Clips of news organizations calling Sam the first openly gay NFL player.] “Guys, guys, guys, he hasn’t told his mom yet! That is not cool! [Laughter.]

Clearly this is fantastic news, but perhaps the true sign of how far we’ve come is not that the news will spend the whole week focusing on the human interest angle, it’s that ESPN has spent their whole week showing no real interest in him as a human being at all.” [Clips of ESPN analysts discussing Sam’s football skills and breaking down the formation he’s suited for, his sack totals and his 40 time.] “Oh, sweet, sweet jargon, the great mathematical equalizer! Because here’s the thing; at its best, the world of sports is completely amoral. If being gay helped Drew Brees throw the ball even one yard further, even the most homophobic Saints fan would be imploring him to question his straightness mid-game! ‘Are you sure, Drew? Are you sure? Are you sure, Drew?!’ I’m not saying that there are not idiots out there; if you typed Michael Sam into Twitter last night, you would find things that would make you despair for humanity. But this moment felt a lot bigger than all of that noise.

And in fact for me, the most heartwarming moment was not when Michael Sam sobbed in happiness when he was told he’d been drafted before lovingly kissing his boyfriend. It was how the ESPN commentators reacted to that moment. [Clips of Trey Wingo and Bill Polian talking about the emotion of being drafted for players.] They just uttered the same bland platitudes they’d been uttering about everyone else for three solid days, which genuinely feels like a breakthrough! So this is where we are now; in a landmark move, the St. Louis Rams, the NFL and ESPN proved they are not concerned with whether there are gay thoughts in Michael Sam’s head, they’re only concerned about if he’s willing to use that head to smash into other people’s heads! We did it, everyone! We have reached the mountaintop!”

Oliver’s very right there; in a lot of ways, the real indication of acceptance for gay athletes is when their sexual orientation no longer becomes their defining characteristic. The sports world obviously isn’t quite there yet, as the amount of attention on Sam this weekend shows (in particular, ESPN spent 10 minutes examining how Sam would fit in with the Rams once he was drafted before cutting to footage from his draft celebration; no other seventh-round pick received anywhere near that much attention), but it’s also hard to criticize networks for focusing on a story with historic significance and broad appeal. What ESPN and NFLN both did right was primarily discussing Sam as a football player, using that “sweet, sweet jargon” and “bland platitudes” instead of focusing on his sexuality.

By not having a needless debate about if a gay player can fit into a locker room, they diminished the authority of those who argue that he can’t. (Interestingly enough, Oliver addressed that very idea of media false equivalence later in his show Sunday, providing a “mathematically representative climate change debate” by surrounding Bill Nye with 96 other scientists who support human-caused global warming and a climate-change skeptic with just two supporters, matching the percentages of the scientific community in favour of each position.) Keeping the Sam discussion focused on his strengths and weaknesses as a football player didn’t allow for an argument about if the NFL should have gay players. Of course, that argument is still taking place elsewhere, with even pro football players in the NFL and CFL criticizing Sam, but ESPN and NFLN denied it prominent platforms it doesn’t deserve, and that’s a positive step.

This still wasn’t easy for Sam, of course, and there was still a lot more focus on him than you would expect on a typical football player. That’s to be expected given his significance as a trailblazer, though. The hope is that now that Sam’s been drafted, a prospect’s sexual orientation will receive far less coverage. The idea that athletes are athletes regardless of sexual orientation (or, if you can play, you can play) is a compelling one, and it’s one that hopefully provides the best way forward towards true tolerance and acceptance in sports. As Oliver put it, once everyone gets the same bland platitudes, we’ve reached the mountaintop.