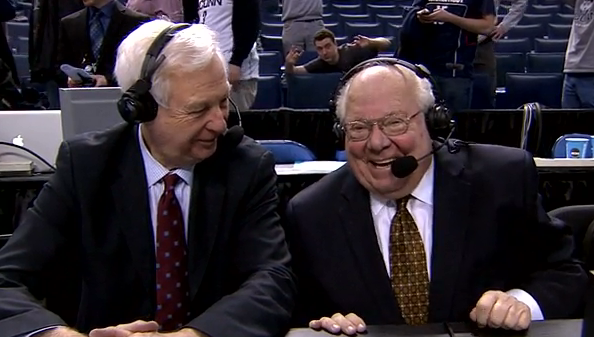 The Sweet 16 begins tomorrow, but before we advance to the second weekend of the tournament it’s time to look back on the first weekend.  CBS and Turner Sports employed 8 broadcast teams for the NCAA Tournament’s first weekend.  We already know that Jim Nantz and Greg Anthony, Marv Albert and Steve Kerr, Verne Lundquist and Bill Raftery, and the trio of Kevin Harlan, Len Elmore, and Reggie Miller will call games on the second weekend.

But what if it were based on merit and not decided beforehand?  Which broadcast booth would be our #1 seed and who would be on the outside looking in?  We’ve ranked each NCAA Tournament broadcast booth from 1-8 from the first weekend of March Madness.  If we were running things at CBS and Turner, things would look just a little different for the rest of this year’s tournament.  Also we would find a way to convince Gus Johnson to come back home.

Feel free to totally agree with these rankings in the comments below.  (What, you would even think about disagreeing?)

It’s a shame that this duo can’t call the Final Four on television for CBS.  They certainly deserve the opportunity at some point in their illustrious careers.  Verne & Raft aren’t so much an announcing team as they are two old friends enjoying a game together.  Raftery remains his exuberant, effervescent self and was in tremendous form in Buffalo dropping Irish accents and “Scoochie coochie coos” alongside his X’s and O’s work.  He was even dropping Wright Brothers jokes in the seldom seen late night online recap videos!

And while Lundquist may not be able to catch everything he once did, his “OH WOW/GOSH/MY/GOODNESS” captures the excitement of the tournament perfectly.  You can see everything about what makes this pair work so well during the end of the Dayton-Ohio State finish.

Announcers should be tasked with one main objective – make the game more enjoyable for fans.  Few do that better in sports than Verne Lundquist and Bill Raftery during the NCAA Tournament. 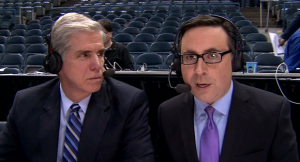 Consider them the Dayton Flyers of the CBS & Turner announcers.  The only difference is that unlike the teams competing in the dance, Eagle and Spanarkel don’t have the chance to earn a Sweet 16 assignment based on merit as the announcing hierarchy is determined well in advance.  It’s not fair to call Eagle underrated anymore – everyone (hopefully including his CBS bosses) should know he’s a top announcer by now.  The true strength of Eagle is his ability to work well with any partner, especially the veteran analyst Spanarkel.

Unlike other teams that are jammed together for special occasions like this, Eagle and Spanarkel have been longtime partners calling Brooklyn Nets games on YES.  That sense of familiarity and chemistry certainly shows as only Eagle & Spanarkel and Marv Albert & Steve Kerr consistently call games together throughout the year before March Madness.

Their call of the Oregon/Wisconsin game is one of the finest you’ll see during this tournament.  Although it was overshadowed by other more fancied matchups in the Round of 32, it was a tremendous display with both teams trading clutch shots and outstanding work in the booth.  You can listen to a couple of the best calls from the game here or here.  Like Lundquist and Raftery, hopefully Eagle and Spanarkel are eventually rewarded for their work with a move up in the tournament at some point. 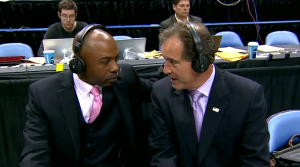 Plenty of eyes were on this pairing as the new top broadcast booth for CBS college basketball.  Unlike other sports though, Nantz and Anthony didn’t call a full regular season together for the NCAA Tournament.  In fact, they didn’t even call the Big Ten tourney together as Nantz’s wife was giving birth.  One has to wonder if they had to re-introduce themselves to each other before Friday’s first tip.  (Or if Nantz said “Hello, friend” when they did.)

That lack of experience working together and chemistry showed a couple times throughout the first weekend.  However, there were also plenty of good signs from this team that CBS made the right decision to play analyst swap with Anthony and Clark Kellogg.  Having Anthony in the booth and Kellogg in the studio plays to both of their strengths.  Anthony is stronger at breaking down plays and unlike his predecessor didn’t use an abundance of obscure analogies.  Kellogg’s affable, more laid-back presence is a better fit in a studio setting.

Anthony’s excitement in the booth, especially during the Kentucky-Wichita State game also seemed to lift Nantz’s call and give the entire broadcast more energy.  (He may want to be wary of shouting too much over Nantz during big plays, though.)  It was only one weekend, but that’s all we have to judge this pairing on at the moment.  Right now, the Nantz-Anthony booth looks promising for CBS and the network should be feeling good about taking the chance on shaking up their roster.

This ranking shows you the wealth of announcers working the NCAA Tournament.  Marv Albert is the best basketball announcer who has ever lived.  Steve Kerr is a very good analyst.  And yet they only come in fourth?  That’s not a knock against this team at all, but a representation of the depth CBS and Turner have at their disposal.

Albert and Kerr are never going to be able to provide the expertise of the college game that others do who call the sport on a full-time basis might, but they’ll still deliver a top notch game call.  Their call of Iowa State-North Carolina, especially the closing minutes, was fantastic.  If there’s one brief criticism you could make here, the pair were a bit late to catch on to the clock not properly starting on time during the fiasco at the end of the UNC-Iowa State game.  But that’s only a minor gripe.  It’s just a shame the pair were assigned to Anaheim and not Madison Square Garden for the second weekend.

Another representation of the depth of the CBS/Turner conglomerate. Brian Anderson and Dan Bonner are as solid as it gets although they may get lost in the shuffle somewhat amongst the bigger names working the tournament.  Anderson may not be seen nationwide as a basketball guy since he serves as a lead voice for TBS’s baseball coverage.  However, he’s carved a nice niche alongside Bonner for the NCAA Tournament.

Take the St. Louis-NC State game as an example.  The pair were all over the “Hack-a-Pack” strategy, as Anderson dubbed it, when St. Louis started fouling unusually early to overcome a big deficit.  Bonner spotted the strategy and the weak free throw shooters NC State was sending to the line.  Anderson increased the intensity of his call as the comeback gained momentum.  It was a job well done from them last weekend after also working the First Four in Dayton.

CBS and Turner keep pairing Reggie Miller and Len Elmore together as broadcast partners and for whatever reason, it doesn’t work.  At least they aren’t at each other’s throats on the telecasts anymore…. but they are breaking down mythical Sweet 16 matchups.  You win some and lose some.

Three man booths are tricky to do well in basketball with limited airspace over a fast moving game.  If the networks are desperate for a three man booth with all these announcers at their disposal, why not bring in Chris Webber?  At least he has experience working with both Miller and Harlan for the NBA on TNT.  They could also go with just Harlan and Elmore and forget the three man booth.  Either way, this current setup has just never clicked. 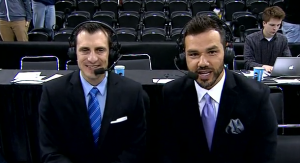 Social media always finds a favorite punching bag to heap criticism upon no matter the sport.  Tim McCarver, Joe Buck, Chris Berman, the list goes on and on.  Amongst NCAA Tournament announcers, that lucky man is Doug Gottlieb.  Maybe it’s the fact that he got off on the wrong foot with Charles Barkley last year, maybe it’s the fact that he’s more known as a national radio host who has been in the opinion business for a long time, who knows.

Gottlieb is fine at breaking down the game (and a better fit in the booth than the studio), but he’s failed to connect with viewers during the tournament and has been criticized as too negative in his analysis.  Dedes is a decent play by play man, but it seems like everyone is still waiting for him to take that next step on the national scene.

If it wasn’t for one slip of the tongue, this duo would be higher in the power rankings.  Unfortunately, the 2014 NCAA Tournament for this pairing will be defined by Catalon’s unfortunate use of an ethnic slur to describe a foul called on a Gonzaga player from Poland.  Catalon immediately apologized and said in an interview with Sports Illustrated he didn’t know the word was offensive and that it was an honest mistake.  His broadcast partner Gminski (who also happens to be in the National Polish-American Sports Hall of Fame) stood by him.  CBS showed their support for Catalon by keeping him on Sunday’s coverage as well.

Indeed there’s nothing in Catalon’s history that shows it was intentionally offensive and he and Gminski did good work on Sunday.  Admittedly it’s a leap of faith to make after such a newsworthy incident, but here’s hoping CBS brings back the pair next year for another chance.