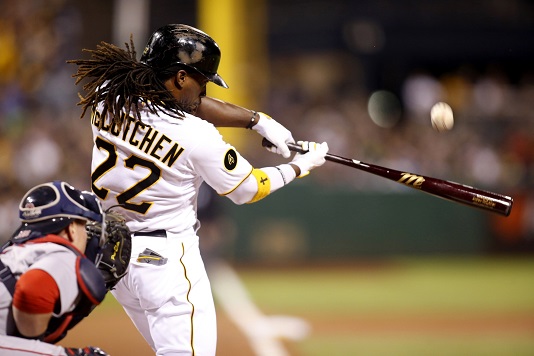 This fall, the MLB Postseason will air on five networks for the first time ever: Fox, Fox Sports 1, ESPN, TBS, and MLB Network. Needless to say, there is a growing belief among pundits that there could be some confusion among fans tuning in for the games. When that belief is combined with declining national ratings, there are questions about what the ratings will look like for the maximum of 43 games that will air on those five networks. But when compared to last year, is there really much to be concerned about?

I’d expect the Wild Card games to pull similar ratings to last year. Both aired on TBS, and drew a 3.0 and 3.1 respectively, good for 4.60 and 4.74 million viewers. With ESPN taking one game this year and TBS taking the other, there shouldn’t be any drop off, especially given that we seem destined to get a large market club like the Dodgers or Giants in the National League game (the one to air on ESPN, much to the joy of Bristol).

The two NL Division Series games that will air on MLB Network will also likely pull similar numbers – Tigers-A’s drew a 0.7 and 912,000 viewers for Game 3 of their series, while Pirates-Cardinals drew a 0.6 and 832,000 viewers. I’d also expect those numbers to also be similar (if not better), given the ratings strength of the five National League clubs that look playoff-bound at this point.

The rest of the Division Series is a crap shoot. The remainder of the two NL Division Series matchups will air on Fox Sports 1, which has struggled with their MLB coverage this year. But last year, the National League ratings on TBS weren’t strong – three of the four Pirates-Cardinals games on TBS drew under three million viewers, and three of the four Braves-Dodgers games on TBS drew under four million, despite three of those four games airing in primetime on the east coast. There will be primetime NFL conflicts with Game 3 (Monday, Bengals-Patriots) and a possible Game 5 (Thursday, Colts-Texans) of each series.

American League numbers on TBS will be interesting to look at. There won’t be any Yankees or Red Sox games this year, but Boston’s four ALDS games with the Rays averaged just 3.77 million viewers – lower than the four Tigers-Athletics games to air on TBS. Adding the Angels and Orioles to the playoff mix, along with possibly the Royals and maybe the Mariners, could result in a slight overall drop. However, both ALDS matchups could get slaughtered in primetime by the NFL – Games 1, 2, and 4 are scheduled to air on Thursday (Vikings-Packers), Sunday (Bengals-Patriots), and Monday (Seahawks-Redskins).

The ALCS will air exclusively on TBS, and last year’s series averaged 7.74 million viewers on Fox. Making the jump to cable will obviously have an effect, as the NLCS on TBS last year averaged 4.89 million viewers. Can the ALCS reach a five million average on TBS without the aid of the Yankees or Red Sox? I’m not sure it can, even with only one primetime NFL conflict (Game 3, against 49ers-Rams on Monday Night Football). The NLCS is a completely different beast. Five of the possible seven games will be airing on Fox Sports 1, and we really don’t know enough about how many people will tune in to the network for such important games. Can those five games even average four million, let alone five million?

Finally, the World Series on Fox. Last year’s Red Sox-Cardinals series averaged just under 15 million viewers. Without an American League bedrock in the fold, we could have a matchup that is very uneven on the national scale. Imagine a team like the Mariners, Athletics, or Royals, all of whom have fervent, but localized, fanbases, facing off with the Giants, Cardinals, or Dodgers, true national powers – there’s a legitimate possibility that casual fans won’t even bother to tune in because of the preconceived notions they have about both organizations.

MLB does have something working in its favor for the World Series compared to last year – they consciously avoided matching their games up with NFL primetime contests. Last year had three games to head to head with NFL primetime games, with a potential Game 7 also matched up with the NFL. This year, just one game will go head to head with the NFL – Game 5, facing Packers-Saints on Sunday Night Football.

It’s going to be very interesting to see what happens. The quality of play in the Postseason will be high, as usual. And plenty of exciting young players could plant their flag in the national stage this October – Mike Trout, Clayton Kershaw, Andrew McCutchen, Bryce Harper, and Adam Jones, to name just five. One thing is for sure, though – no matter what the ratings for this year’s Postseason look like, the columns about the death of baseball are going to come in like they do every years, and we’re just going to roll our eyes and move along.