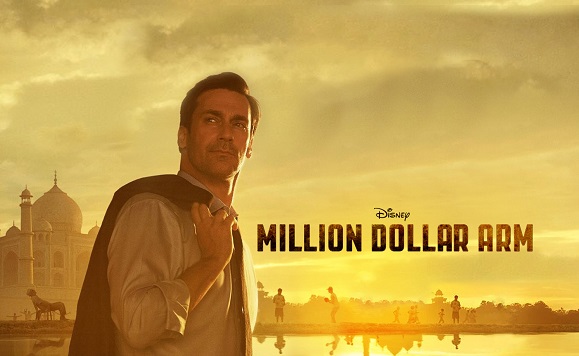 The marketing that ESPN put towards Million Dollar Arm was unreal. They slapped Bill Simmons on the film as an executive producer, aired a live episode of Baseball Tonight from the red carpet, and had Jon Hamm make a live appearance on the Sunday Night Baseball set last weekend in Pittsburgh. None of that, along with various MLB reporters who had cameos in the movie plugging it nonstop, helped the film avoid a fourth-place finish in its first week in theaters. If there’s one bright side to Million Dollar Arm’s opening, it’s that it did manage to beat out the opening weekend for Draft Day, which only made $9.8 million, in April.

So, what went wrong with Million Dollar Arm? Over at The Outside Corner, Ian Casselberry called it bland and said that the film barely qualified as a baseball, or even a sports movie – the baseball players aren’t the film’s main characters, and the story that the baseball players are involved in isn’t compelling. Disney was trying to hit too many demographics with Million Dollar Arm, and whiffed on really capturing any part of the market.

I think that’s a solid enough summary. Trouble with the Curve suffered from the same issues – it was billed as a baseball movie, but the baseball parts of the movie were so terrible that baseball fans were immediately turned off to it, forcing the main plot to stand on its own without the baseball aspect. Just because you slap a sports subplot onto a love story or a journey to find one’s self, that doesn’t make it a sports movie. If you can swap out another industry in place of sports in your movie, it’s not a sports movie, and the sooner that Hollywood realizes that, the sooner we can go about fawning over actual sports movies instead of the junk we’ve been seeing lately.