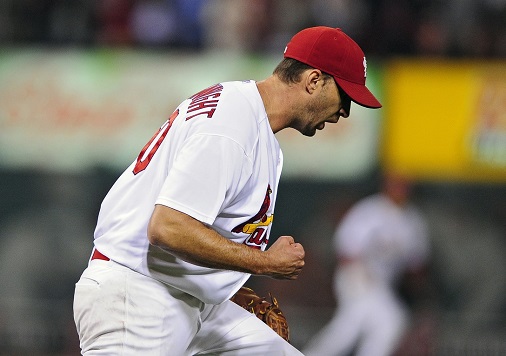 Every couple of months, Sports Business Daily releases local MLB ratings data. Because I’m a baseball addict, I love devouring this information and digesting the data. At the All-Star Break, midwest markets were dominating the local ratings among all teams, with the Tigers, Cardinals, Pirates, Reds and Brewers at the top of the mountain. With the season over, two of those teams have been replaced in the top five by other midwest teams.

The Cardinals finished the year with the highest local rating in baseball with a 7.76 rating. The Tigers, who led baseball in local ratings in both 2012 and 2013, fell to second with “just” a 7.62 rating. In third were the Pirates, holding strong with a 7.49 rating. The Royals, heading to the playoffs for the first time since 1985, finished fourth with a 6.51 rating. Finally, the Indians were fifth in baseball with a 6.17 rating. Interesting to note that four of those five RSNs are Fox-owned, with the one exception being the Pirates on Root Sports Pittsburgh. Another interesting note: the Cardinals, Tigers, and Pirates all saw their average rating drop from 2013, while the Royals held flat and the Indians rose.

And then, there’s the other end of the spectrum. The lowest ratings in baseball, unsurprisingly, belonged to the Dodgers and Astros, burdened with difficulties with their new RSNs in SportsNet LA and CSN Houston (which seems destined to be rebranded to Root Sports Houston in the coming days and weeks. Filling out the bottom five are a trio of teams on Comcast RSNs: the White Sox, A’s, and Cubs. Oakland has also been second fiddle in their market to the Giants, so their struggles (despite on-field success this year) aren’t surprising. As for the Cubs and White Sox… well, they’re simply not good teams right now, and the youth movement on the North Side and Paul Konerko’s farewell on the South Side weren’t enough to drag in substantially more viewers this season (though the White Sox did see their ratings slightly jump by 4%).

When it comes to the average side of the audience, it’s no surprise that major markets dominant, simply because of the sheer amount of people in those markets. The Yankees topped the viewership list and averaged 221,000 households per game, a jump of 13% from a year ago. The Tigers finished second at 141,000, followed by the Mets, Red Sox, and Giants. Boston’s ratings dropped 34% this year as the team bottomed out in the AL East standings. Of the least-viewed teams, none come as a surprise: the Astros, Marlins, A’s, Padres, and Rockies made up the bottom five, all averaging under 40,000 households per game. Overall, 16 of the league’s 30 teams were down, 12 were up, and two were flat, which isn’t surprising given the struggles of major market clubs like both Chicago teams, the Phillies, and the Red Sox, and the Time Warner chaos battering the Dodgers.

There are also some interesting notes about a variety of markets. Brewers ratings increased by 48% on FS Wisconsin, averaging a 5.71 despite the team’s collapse near the end of the year. Orioles and Nationals ratings both fell on MASN in 2014, but Baltimore was coming off a record year in 2013 and their 5.88 average was still their second-best mark since 1997. As for the Nationals, their ratings were down 16% to a 2.29 this season, but they’re coming off of an insane 74% jump in 2012 and another 8% rise in 2013. There’s only so high that a team’s local ratings can go.

What about the Blue Jays? We barely hear much of anything about Toronto’s ratings because of the fact that they’re a Canadian team airing on a Canadian RSN with different rules and regulations than their American counterparts. The Jays averaged 590,000 viewers (not households) on Rogers Sportsnet this year, a 13% rise from last year. Hey, whatever works – the Jays dominate Canada.

All in all, it was a solid year for baseball locally. No one is going to claim that their national numbers can compete with the NFL, but considering that these RSNs are cable channels, the numbers are a good sign for MLB entering the postseason.