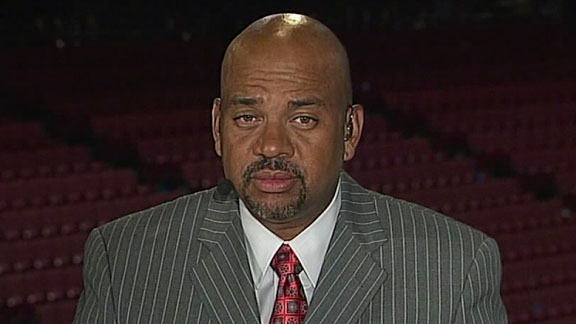 Jurgen Klinsmann has done some polarizing things as head coach of the US Men’s National Team in the lead up to the 2014 World Cup.  He left all-time leading goalscorer Landon Donovan off the roster.  He’s choosing to feature an armada of young players (many dual-national players that have been imported from elsewhere) that are untested at the highest level.  He has publicly said that the USA can’t win the tournament, a media tactic often seen around world soccer but rather unheard of on these shores.

But by far the most controversial thing Klinsmann has done in the eyes of Michael Wilbon is taking the name of Kobe Bryant in vain.

On Thursday’s PTI, Wilbon responded to Klinsmann comparing Donovan to Bryant and rewarding athletes for what they have done in the past versus what they will do in the future.  Here’s the Klinsmann quote:

“This always happens in America. Kobe Bryant, for example — why does he get a two-year contract extension for $50 million? Because of what he is going to do in the next two years for the Lakers? Of course not. Of course not. He gets it because of what he has done before. It makes no sense. Why do you pay for what has already happened?”

Seems like a fairly reasoned, pragmatic opinion, doesn’t it?  How many huge contracts are albatrosses because franchises choose to pay aging, declining stars beaucoup bucks?  Where Klinsmann is coming from makes total sense, if it isn’t really how things work in sports.  But for some peculiar reason (more on that below) it led Wilbon on one of the more intense rants PTI has seen recently.  Here’s the audio of the full segment…

Here’s everything wrong with this, aside from the fact that no, Wilbon probably does not want to physically deport Jurgen Klinsmann from this country and forcibly remove him from his family.

1) “For some time I’ve known Kobe Bryant, and you Mr. Klinsmann, are no damn Kobe Bryant.”

Honestly, this sounds like something from Kobe Bryant’s personal PR man or agent instead of a sports journalist, what Wilbon still purports to be.  “I’ve known Kobe Bryant.”  What is that?  In fact, it sounds like a bad parody of SNL’s Stephen A. Smith parody.  Wilbon and Bryant obviously have a close relationship.  Had Klinsmann said the same quote and inserted Carl Crawford’s name instead of Bryant, do you really think Wilbon would be this passionate about the substance of what he said?  Of course not.  (And for what it’s worth, Wilbon should check out Klinsmann’s resume as a player before saying he could never match up with Bryant.)  This is little more than a television personality protecting one of his guys.

Because the most important thing in this conversation you need to know is that Michael Wilbon is friends with Kobe Bryant.  And has known him for a long time.  They hang out together in social situations.  And possibly even Snapchat with each other.

As Dan Levy points out today, Klinsmann has lived in America since the late 1990s.  His son is a player in the US Soccer youth system.  He’s lived in Los Angeles, where Kobe Bryant has just happened to play professional basketball for the entirety of his career.  To imply that Klinsmann is some kind of evil German mastermind bent on destroying the fabric of American culture from within is just silly and a complete fabrication.  Completely ignoring the jingoistic/made-for-TV ranting and raving, the entire crux of Wilbon’s argument is just not factually correct.  If we’re going to be in the business of deporting everyone whose sports opinions we don’t agree with, can’t we at least start with Skip Bayless?

Again, false.  Klinsmann won the 2013 Gold Cup as coach of the United States.  It’s not the World Cup, but it still counts you know.  He also led the team on a record 12 game winning streak last year that included a victory over Germany, their first since 1999.  In 2013, the USMNT had their most successful year of results.  Ever.  The US isn’t going to win the World Cup this year, but to imply Klinsmann is a failure because of that is misguided.

Klinsmann is not just the coach of the national team, he’s also the technical director.  In fact, he’s been charged with a total overhaul of the USMNT system.  To say that “he’s only a coach” is laughable.  After all, Klinsmann was the one who picked the 23 man roster and left Donovan off the team.  That’s where this entire story comes from in the first place.  If Wilbon really thinks he only names a starting lineup and stands in a coach’s box and points at stuff he is mistaken once again.

I don’t want to be the soccer snob that criticizes anyone who dares to talk about the sport without wearing a scarf and calling the field a “pitch.”  However, if Wilbon is going to yell about soccer and what the USMNT coach has or hasn’t accomplished in a rant protecting one of his basketball guys, at least get some facts straight.

Not even all of them, just some.  That would be a good place to start.