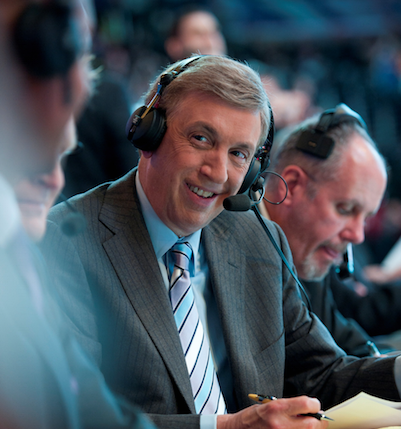 Legendary broadcaster Marv Albert has been a busy man in recent years.  In addition to his work with the NBA on TNT, Albert has added announcing assignments that include the NCAA Tournament with Turner and CBS Sports as well as the NFL on CBS.

The 72 year old announcer has decided that now is the right time to take a step back from that busy schedule.  In an exclusive interview while he works the NBA’s Western Conference Finals for TNT, Albert told me he’s called his last NFL game for CBS.

“I started feeling this toward the end of last NFL season,” Albert said. ” I love everyone I work with.  Sean (McManus) has been tremendous.  As much as I’ve enjoyed doing the NFL over the years I had to cut down.  The NBA season and the addition of calling the NCAA Tournament kept extending what I was doing.”

Albert cited the impressively hectic schedule of his son Kenny, who is traveling across the country calling both of the NHL Conference Finals for television and radio.  The elder Albert joked that the only reason Kenny was taking on such a broadcast load was to rack up travel rewards points, but also marveled at his ability to call so many hockey games in succession (which he remarked were very tough on an announcer’s throat).

“I’m happy about it, I’ll watch (the NFL) of course, there are aspects I’ll miss about doing NFL games but basketball is my passion and now the season goes from mid-October to the beginning of June with the NCAA and NBA,” Albert said.

Although Albert is considered by many as the voice of the NBA, his relationship with the NFL goes back many years.  In addition to calling games for the NFL on CBS for three years, he worked Monday Night Football for several years for Westwood One radio (calling multiple Super Bowls) and NFL games for NBC as well.  Albert’s decision to step away from the NFL will allow him to focus now on his basketball duties.  In addition to his work with the NCAA Tournament and NBA, plans are in place for Albert to call multiple regular season college basketball games for CBS.

CBS Sports chairman Sean McManus added, “Working with Marv and having his voice on our NFL coverage the past three years has been a privilege for all of us at CBS Sports. We look forward to continuing our relationship on college basketball, both in the regular season and the NCAA Tournament.”

Albert mentioned that there were two more years remaining on his NFL contract with CBS, but that the network was understanding of his desire to cut back on his schedule.  Doing so now means a replacement can be named well before the start of the 2014 season.  CBS has had an unusual amount of shuffling to do with their usually steady NFL lineup.  Several changes have been made in the studio and Dan Dierdorf retired from national duty to call games on the radio for his alma mater, Michigan.  Trent Green has been added to the game analyst ranks at the network as well.  It remains to be seen who the network will select to fill Albert’s position among their play by play ranks.

“Working with CBS, because they’ve done such a sensational job over the years and known for their work with the NFL, was a great thrill,” Albert said.  “There will be times I’ll turn the TV on and wish I was doing the game.  We love it as broadcasters, but it’ll be nice to have that time off in-between.”