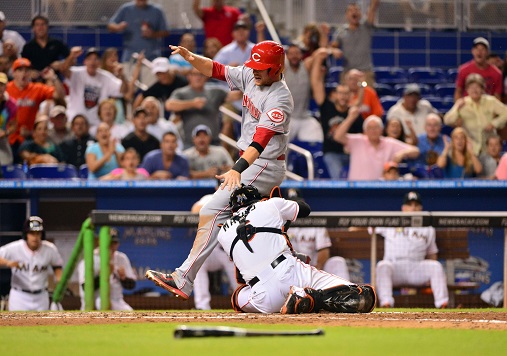 Hutton was fired up from the get go, and the Marlins crowd actually showed some emotion by booing the bejeezus review. As the review went on and on, Hutton got angrier and angrier before eventually boiling over once the call was overturned.

You can give the Marlins a lot of grief for their business practices, but I loved everything about their reaction here, from Redmond going crazy, to Hutton losing his mind, to the Miami crowd showing their rage at the situation.

After the game, Redmond was still fired up, and he put together one hell of a post-game press conference.

If this was the NBA or NFL, Redmond would be getting a fat fine for criticizing the officials. And hell, he didn’t even have a gripe with the on-field officials, WHO AGREED WITH HIM – he went after the replay officials at the MLB offices in New York. I wonder if that violates one of the unwritten rules of the game.