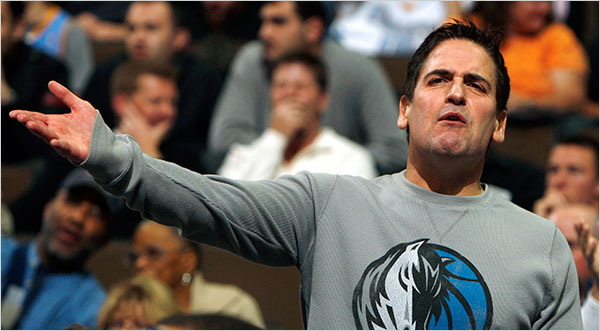 Below is a video from Inc magazine in which Mark Cuban – Mavericks owner and Shark Tank panelist among many other things – shares some very genuine personal thoughts on racism today and his philosophy and logic for the upcoming NBA vote on Donald Sterling’s ownership. The clip is part of a larger interview with Cuban spanning multiple topics. For over two and half minutes a very measured and solemn Cuban opens up about his personal beliefs on racism today including some general stereotypes that he holds that still affect him.

I found it to be a constructive and thoughtful piece, one that falls into what I call “real” discourse about race and not the fluff that most networks and shows have been known to put out in short frenzied segments.

Quick on the draw (something Bleacher Report strives for), one of the first and more prominent reaction articles came from Bleacher Report’s Jim Cavan. The current headline reads “Dallas Mavericks Owner Mark Cuban: ‘We All Have Our Prejudices and Bigotries’.” The URL to find it ends with “dallas-mavericks-owner-mark-cuban-we-all-have-our-prejudices-and-bigotries”

Earlier versions of the article ran with the headline of “Cuban: ‘I Know I’m a Bigot’” with a URL string of “mavericks-owner-mark-cuban-says-hes-bigoted-against-a-black-kid-in-a-hoodie.”

Below is also the cached version of the original lede. 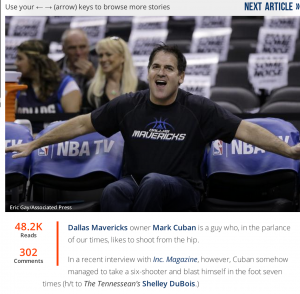 The lede has now been updated as well with a much softer wording of “In a recent interview with Inc. Magazine, however, Dallas Mavericks owner Mark Cuban had some rather controversial things to say about Donald Sterling, bigotry and how you can’t legislate against stupidity.” From the screenshot above we can discern that around 50,000 readers saw this version of the article as it’s current toned down version shows 54,000 reads.

Cavan’s article, while arguably reasonable in parts,  seems to stray away from Cuban’s intended message to some degree. But what likely set off Cuban was the initial headline and URL for the article.

Cuban opted to take to Twitter and fired off the following tweets to Cavan. 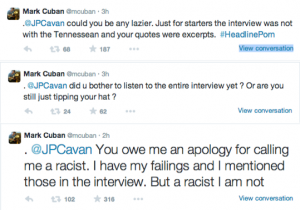 After the first tweet to Cavan, Cuban also threw shade on Bleacher Report Founder Dave Finocchio who is the only founder still with the company and the one most connected to its content strategy. 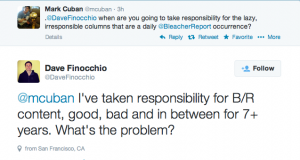 While there have been a lot of Bleacher Report cracks over the years, this is one of the more public and notable ones given Cuban’s 2 million+ Twitter followers and the fact he’s an NBA owner in a league that has a business relationship with Bleacher Report’s parent company, Turner.

Finocchio responded quickly but seemed unaware of the offense in question. Other than his response, the only other semblance of a formal reaction comes at the end of the article with the note “Editor’s note: The original headline on this article was changed to better represent the scope of Cuban’s remarks.”  I’d imagine tomorrow will yield a more formal response on the B/R Writer’s Blog/damage control hub.

Over the years, Cuban has had several tweets bemoaning the rise of Bleacher Report, so this isn’t totally new. Cuban is very familiar with the online content space having been an early investor in popular blog network WeBlogs. inc which was sold to AOL and was recently announced as an investor in former Deadspin editor AJ Daulerio’s startup Ratter.

So, was Bleacher Report’s treatment of Cuban’s interview wrong and was Cuban over the line in responding?

That said, others have followed in the wake of Bleacher Report in going down the same road. USA Today is running a headline “Mark Cuban: ‘I’m bigoted in a lot of different ways‘” and the Detroit Free Press has opted to go with “Mark Cuban on Donald Sterling: ‘I know I’m bigoted.'” Will Cuban bemoan these headlines as well?

The reality is that Bleacher Report was first down this path and given Cuban’s longstanding disdain for the site and its content, he didn’t feel compelled to hold back his thoughts about the site similar to his thoughts on racism and stereotypes. What’s interesting is that he targeted a founder in addition to the writer and company, a calculated move to draw attention to his beef as well as putting pressure on a response and explanation.

At the end of the day, I think Cuban is most dismayed that he’s trying to start a real and honest conversation about racism and shared some personal feelings to help initiate that conversation. Having those personal thoughts twisted and presented in a way that overshadows the intent of the overall message is one that compelled him to lash out and probably moreso given it came from a corner of the internet that has irked him for quite some time.

It’s Cuban’s right to do so, especially considering the subject matter at hand. That said, I think sadly he’ll find Bleacher Report is one of many outlets in both new media and traditional who are going to go this route. That’s probably another honest and difficult conversation (modern day content practices) that would be great to have some dialogue on. Either way, when it comes to racism, content, or whatever else, Cuban is going to speak his mind and you either love it or you hate it although you could argue that at the very least it’s refreshing and a hell of a lot more interesting than the status quo.

UPDATE: Cuban is still in a fighting mood as he’s now turned his attention to Jason McIntyre and The Big Lead this morning for posting his comments without the full video context.