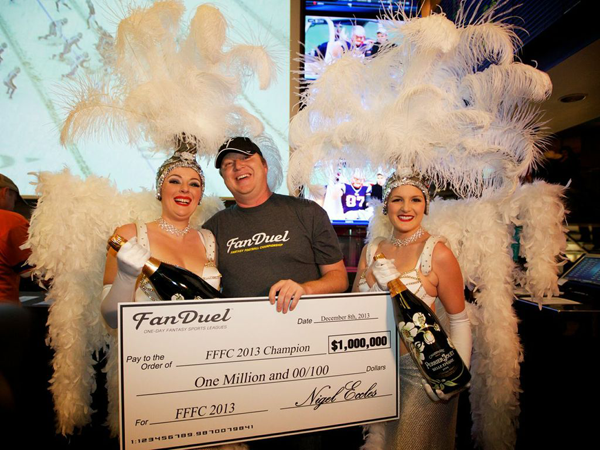 At my annual fantasy draft with my high school friends, a peculiar thing happened when the pizza delivery guy arrived (peculiar outside of the normal 3 guys realizing they didn’t have any money on them and 3 guys saying they “just wanted a slice”).

The delivery guy asked what we were watching inside. I told him it was our fantasy draft which led to the response ,”Don’t you wish you were the guy who won more than half a million dollars on FanDuel?” Was this guy running an affiliate program or something?

Whether pizza delivery guy plays daily fantasy games or just took note of one of the many commercials that now seem to now be a prevalent part of the sports advertising mix, the point was duly noted: Daily Fantasy has blown up and grown up.

It’s not just the pizza guy though, it’s everywhere. Just in the last month:

– SI is doing the same and has rolled out their own daily fantasy mobile app, Fan Nation, which is a bit different in terms the actual games offered but piggybacks off the same concept although with a more social component.

– FanDuel raising $70 million in funding in VC funding including an investment from NBC’s venture group.

I’ll spare you the river of statistics and quotes that come with all these developments. The bottom line – daily fantasy is blowing up. But that’s where things get interesting.

FanDuel and DraftKings and all the others continue to thrive mainly because mainstream sports providers are hesitant to enter the market.

ESPN, FOX, CBS, Yahoo, etc are largely watching from afar wondering if this upstart industry will continue to grow without drawing the ire of government regulation.

By entering the market by either launching their own products or acquiring an existing provider, you can certainly imagine competitors who don’t take the plunge will be quick to lobby that daily fantasy is unregulated and very akin to gambling on sports. Then again does raising the issue put fantasy sports as a whole under more legal scrutiny?

USA Today and SI not collecting league fees like the major players is another sign that while the mainstream companies want to “own” this rowing space, nobody wants to take the heat of being the first to openly and fully embrace daily fantasy.

In my perfect world, poker is legal, sports gambling is legal, daily fantasy remains legal, and blacking out games becomes illegal.  That said, my perfect world is far from reality and you may have noticed that things do not particularly run smoothly in our nation’s capital and hence the trepidation on daily fantasy.

To some degree I get it. “Traditional” fantasy isn’t even legal in all 50 states as is. Daily Fantasy is fundamentally different and I imagine removes the social component that most fantasy leagues have as friends, families, and offices often have traditional leagues but it’s hard to imagine these leagues transitioning to daily fantasy. It wouldn’t take much to motivate some type of regulation, research, or media coverage to effectively put the brakes on daily fantasy, especially considering the dominant companies in this space are upstart brands with nominal political capital.

Most likely the major players are deferring until a time where bracket pools, “normal” fantasy games, and even online poker get more clarity in terms of how they’re viewed at a legal level. Until then, we’re in this awkward holding pattern where despite millions and millions of dollars being exchanged, invested, and spent on acquisitions, daily fantasy operates in enough of a grey market that none of the established sports media companies all thirsty for revenue, traffic, and users will enter the space in a meaningful way.

Perhaps years from now, we’ll be playing ESPN and Yahoo Daily Fantasy games for money. By the same token we could be going to Vegas or Indian reservations with wads of cash to splurge on daily fantasy games.  It’s an interesting and yet quiet stalemate. Barring an HBO Real Sports, 60 Minutes Sports, or OTL segment that brings light to daily fantasy, it’s going to continue to stay on the back-burner to the delight of those who have staked out their claim. Who knows what’s in the future in this new frontier of fantasy sports.