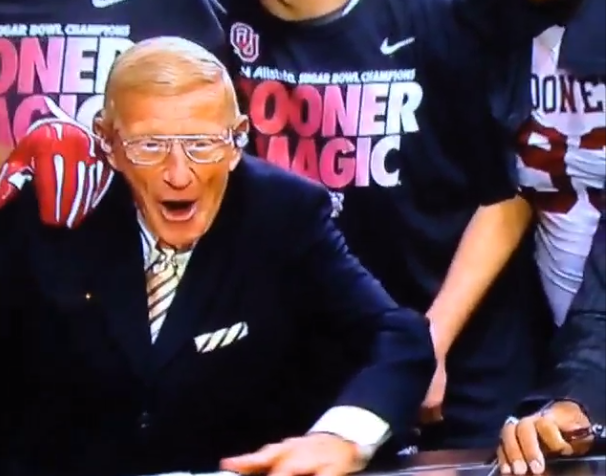 It’s been quite the year of change for ESPN’s college football coverage.  The network decided to put longtime lead announcer Brent Musburger out to the pastures of the SEC Network in a hotly debated move with Brent still at the top of his game.  In his place steps Chris Fowler, who will not only serve as the host of College GameDay, but the voice of the new College Football Playoff.  He might as well become the new NCAA President while he’s at it.

But that’s not all.  With the SEC Network debuting this year, ESPN has also added Tim Tebow and Greg McElroy to its college football stable and is also moving well-known personalities like Joe Tessitore and Jesse Palmer to the network as it jump starts.  And that’s not to mention the contract negotiations of Rece Davis, who now sees his path up the ESPN ladder completely blocked by Fowler.

And now we may see another change with Lou Holtz telling 24/7’s Notre Dame site that he’ll be retiring from ESPN at the end of the college football season to work on his golf game and spend more time at home.

“I’d like to practice my golf a little more. I’ve been everywhere except to bed. I’ve spoken to everybody except my wife. Somebody said, ‘Do you ever go anywhere where people don’t recognize you?’ I said home. I owe it to her to spend a little more time with her. I said that last year too.”

Holtz was at a golf tournament fundraiser put on by current Fighting Irish head coach Brian Kelly.  However, don’t plan on getting your retirement gifts ready for Holtz just yet.  He also added that he’s had plans to leave ESPN before and had a change of heart:

“I’d like to leave when people say, ‘Why are you leaving?’ not ‘When are you leaving?’” he said. “This is my fifth last year. They usually talk me into it. ESPN is a great organization to work for. We’ve been together nine years now. That’s unusual. They’re like my family. I love them. We enjoy it. There comes a time where you need to step aside and let the younger people do it.”

Holtz is 77 year old and that last sentiment rings true considering what ESPN will be investing in analysts who are a third his age in Tebow and McElroy.  The Hall of Fame coach is a legendary figure in the game, but his television presence in recent years has devolved into fake motivational speeches and mock courtroom segments with Mark May and Rece Davis.

Holtz still has a lot to offer in his wisdom and quotability, but let’s be honest – ESPN has not used him well in recent years.  It would have been better had he just retired after this…