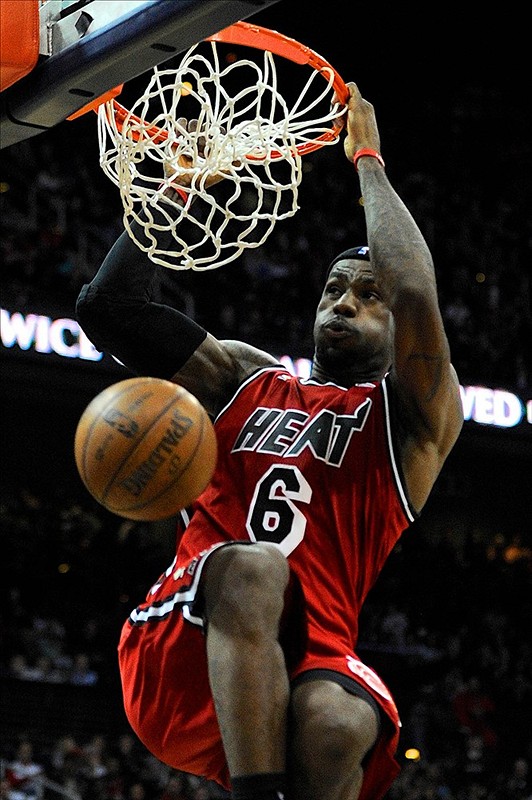 LeBron James sat down for one of those GQish GQ profiles and spoke openly about a number of topics.  One of them was the ill-fated television special, The Decision.  At the time, it was widely panned and turning his free agency choice into a made-for-TV event made James one of the top villains in the sports world for a couple years.  Only now that time has passed and James has become a champion has he regained his universal popularity (at least outside of Cleveland that is).

Reflecting on the decision to take his talents to South Beach, James says it was something he needed to grow as a basketball player and as a man…

The Decision show was a flop. He gets that. But the decision itself was just a man having a growth spurt. "The best thing that ever happened to me," he says. "I needed it. It helped me grow as a man. As a professional, as a father. At the time, as a boyfriend. It helped me grow. Being confined, I spent my whole life in Akron, Ohio. For twenty-five years. Even though I played professionally in Cleveland, I still lived in Akron. Everything was comfortable. I knew everything, everybody knew me—everything was comfortable. I needed to become uncomfortable.

"Now I've seen everything on and off the floor this league has to offer," he says. "I got an answer for everything. Winning, losing, being a free agent, staying, leaving, media, media down on you, media big up on you, agents, money, parking it, family, money. All, everything. So whatever your question is, I can deliver."

Before you get too up-in-arms about this, it sure seems like James is talking about the decision to leave the Cavaliers for the Heat and not The Decision in capital letters.  After all, it's hard to believe being asked about biting your fingernails by Jim Gray would be your life's best moment.  But it opens up an interesting conversation on how the perception of LeBron James since that made-for-TV special.  It's taken a few years, but his public image has fully recovered, and perhaps has even surpassed his days in Cleveland.  And through those years of negativity, James had to live under a much tighter microscope as the Miami Heat became the most talked about franchise in sports.  James had to deal with arguably even more pressure in Miami than Cleveland from the national media, especially trolls like Skip Bayless.  In the end, James was proven right in leaving Cleveland for Miami for all the reasons he listed.

But what about this summer?  LeBron James will have another decision to make.  I'm sure he will have learned from The Decision Part I and not turn it into a television event, but it will be interesting to see how different the spectacle is this time around.