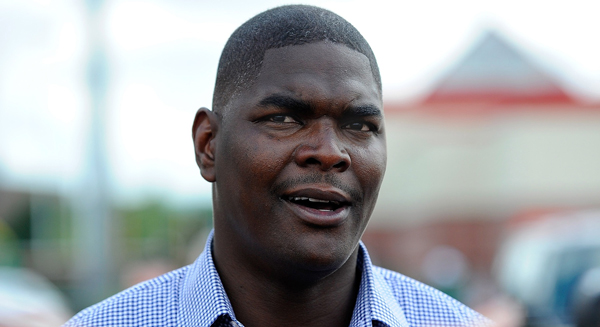 Last time Keyshawn Johnson was tabloid fodder, he was the protagonist in a feud with Justin Bieber. Everyone naturally took Johnson’s side as he told The Biebs to, almost literally, get off his lawn in their Calabasas, Calif. neighborhood.

But now the former NFL wide receiver and current ESPN analyst is on the other side of a TMZ report stemming from his Southern California home base. He was reportedly arrested on domestic violence charges Monday morning.

According to law enforcement … Keyshawn was involved in a fight with his ex-girlfriend when things allegedly got physical. Sources say he smashed her phone, causing a gash to her hand.

Our sources say the two had an up-and-down relationship and were arguing over marriage.

Johnson was formally arrested for misdemeanor domestic battery and booked.

The 41-year-old wasn’t exactly known as a model teammate or citizen during his time in the league, but as far as we can tell this would be his first arrest.

Will he receive any discipline from ESPN? Fox Sports 1 didn’t discipline Donovan McNabb after it was revealed he was arrested for DUI. The Worldwide Leader didn’t give Matthew Barnaby a second chance after the hockey analyst was arrested on suspicion of DWI in 2011. In 2010, charges against NFL expert Jeremy Green were arguably much more serious, but he was also canned immediately.