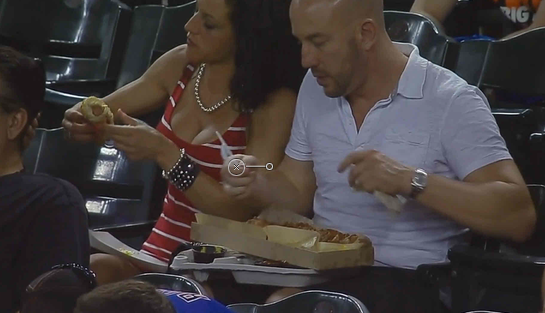 Mets broadcaster Keith Hernandez has already been in the news this week thanks to the Brooklyn Cyclones and their upcoming “magic loogie” bobblehead giveaway. Now, he’s relevant for another reason.

Hernandez and play-by-play man Gary Cohen were calling the Mets-Diamondbacks game on Tuesday night for SNY when the cameras found a couple in the stands eating one of the infamous $25 hot dogs at Chase Field.

That’s when this happened:

The chuckling and awkward silence after Hernandez says, “I wasn’t talking about the hot dog” would have probably gone on longer if the producers hadn’t quickly cut to the shot of the vendor carrying it on the concourse.

Then (and this happens after the YouTube clip above ends), just when it seems like they’ve moved on, the cameras cut back to the woman and her friend prompting Hernandez to exclaim, “She looks fit. She must be a runner.”

It was certainly no Brent Musburger/Katherine Webb gush-fest, but it deserves to be right up there in the annals of creepy broadcaster-fan moments.