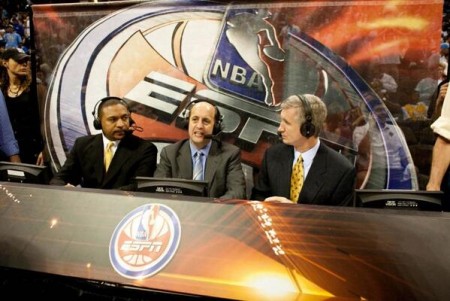 Mike Breen won’t allow it. If Jeff Van Gundy ever is on the verge of jumping back as a NBA coach, his ESPN/ABC partner knows exactly what he will do: Sabotage.

“If I ever hear he’s offered a job, I’m going to call the GM and say, ‘Do you know about his gambling addiction?’ Breen said. “I’m going to tell the GM, ‘He’s got some dark secrets. You really don’t want to hire this guy.’”

Obviously, Breen is joking about Van Gundy’s private side. However, it speaks volumes on how much he and ESPN/ABC value his abilities on the public side.

Van Gundy’s talents will be on full display during ABC’s coverage of the NBA Finals, which begins Thursday. Initially a work-in-progress when he first joined ESPN/ABC in 2007, he now has emerged as one of the best TV sports analysts in the business. And that’s in any sport.

Not only is Van Gundy candid with his unique analysis, but he also has a quirky personality that leads to many unpredictable moments during the broadcast. Breen has learned by experience to be ready for anything.

“He has a broad spectrum,” Breen said. “He’s a big reader of US Magazine. He likes the gossip columns almost as much as the sports columns. When there’s a pause, and he says, ‘You know I want to say something…’ I’m like, ‘OK, what’s coming out of his mouth now.’ His unpredictability is what makes him so much fun.”

Tim Corrigan, the lead producer for the telecasts, agrees. He says being genuine might be Van Gundy’s biggest strength.

“With Jeff, off the air compared to on the air, there’s not a huge swing,” Corrigan said. “I don’t think there ever has been a broadcaster who could have less of an ego. I can’t tell you how easy it is to work with him.”

Corrigan also thinks Van Gundy has grown as a broadcaster. For his part, Van Gundy believes he is finding more of a comfort level after all these years.

“The more reps you do, the more comfortable you get doing something,” Van Gundy said. “When you’re not trained to do this, you need people to allow you to be yourself. I appreciate that ESPN has allowed me to do this. I never feel like I have to watch what I say.”

Van Gundy actually is saying less than ever since he and Breen were reunited with their old partner Mark Jackson following his firing as coach at Golden State.

“Basketball fans in America are applauding the three-man booth so they don’t have to listen to my inane rants,” Van Gundy cracked. “And believe me, no one is upset, myself included, that I do less talking.”

As the years pass, Van Gundy gets further removed from coaching. Considering he now has been wearing head phones since 2007, I asked him how he views himself these days: As a coach or a broadcaster?

“That’s a great question,” Van Gundy said. “I think of myself as a coach who broadcasts basketball. Broadcasting is so different. Mike makes it look so easy. It’s really hard.”

Van Gundy admits he misses the competition and camaraderie that comes with being a coach. “You can’t recreate those things,” he said.

Yet while his partner has returned from the sidelines and his brother, Stan, got a huge job running the Detroit Pistons, it looks as if Jeff Van Gundy will return to ESPN/ABC for an eighth season next fall. Still young at 52, it seems unlikely that he won’t give coaching one more try at some point. Then again they said the same thing about Jon Gruden, and he keeps doing “Monday Night Football.”

During a Finals conference call Wednesday, Van Gundy was asked if he had any interest in the Lakers job, and there even is some speculation that he could get a call from Phil Jackson about the Knicks opening.

Typically, Van Gundy deflected the talk. In my interview with him, he fell back on what has been a standard line about whether he would get back into coaching.

“My Dad always said, ‘Just worry about the job you’re doing,’” Van Gundy said. “This is what I’m doing now and I’m having a good time doing it.”

Breen actually thinks Van Gundy is happier now. The stress level is much lower. He said Van Gundy took losses so hard, he could be “miserable to be around as a coach.”

Selfishly, Breen wants to work with Van Gundy for a long time. He thinks his partner now has the best of both worlds.

“Listen, I know being a coach is in his blood,” Breen said. “He always will be a coach until the day he dies. But he still can have an impact on the NBA (as an analyst). He has a strong voice. He is very opinionated, but he backs up his opinions with strong information. And it all comes from a love of the game.”