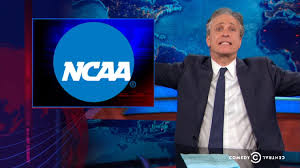 On Thursday night’s episode of The Daily Show, Jon Stewart set his sights on the NCAA, and destroyed the reviled organization. He even showed a clip from Fox News without the intention of trashing them!

Stewart’s points in skewering the NCAA are valid. It *is* a joke that Shabazz Napier, who led UConn to a national championship on Monday, has had nights where he couldn’t afford to eat while his school rakes in millions upon millions of dollars because of his efforts on the court.

I didn’t even think about the fact that UConn players can’t take advantage of the free food that restaurants were offering for their national title – that’s more than a little gross.

Maybe Stewart giving the NCAA some of his criticism will spur change, even if that change has nothing to do with a union. Nearly everyone agrees that some sort of change is needed with the NCAA, and hopefully, it’s on the horizon.