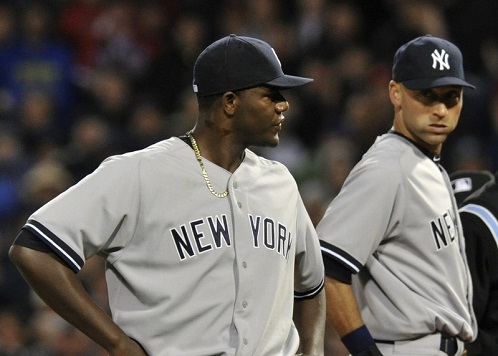 During Wednesday night’s Yankees-Red Sox game on ESPN, Michael Pineda of the Yankees was ejected for having a large glob of pine tar on his neck. It was the second time that Pineda had a pine tar incident against the Red Sox this year, and the common sentiment among baseball fans and analysts is that Pineda should have done a better job at mucking up the ball if he was going to cheat.

Enter Yankees manager Joe Girardi, who according to the New York Post, shifted the blame from Pineda or the Yankees onto… ESPN?

“What frustrated me is that the camera is meant for the dugout and Michael was already out of the game so I don’t want it down in our tunnel,’’ Girardi said. “It’s a private area and it has been clearly stated that it is for the dugout, not for the tunnel and conversations that happen between players and coaches.

The issue that Girardi is referring to is from the below video, where Girardi pushes a camera in the Yankees dugout back towards the field instead of down the tunnel where Pineda was talking to a Yankees staffer.

Here’s more from Girardi, where he once again points the finger at ESPN for daring to turn their camera towards the tunnel.

“I think MLB is going to have a problem with ESPN,’’ Girardi said. “I didn’t break the camera. All I did was keep it from going into our tunnel. You guys are acting like I ripped it apart. The camera worked the rest of the game, didn’t it? All I did was turn it so it was on the field or in the dugout. If I get fined for that I will have a problem with that because I didn’t do anything to hurt the camera.’’

What a messy situation. Girardi is trying to deflect some of the attention from Pineda to ESPN here, but let’s be honest – ESPN isn’t the one who smeared a glob of pine tar on Pineda’s neck and didn’t say anything about it to him.

ESPN’s job isn’t to protect athletes, coaches, and executives, though it does happen on occasion. When there’s an incident like this during a game, ESPN needs to get the viewers as much information as possible. Simply letting Pineda disappear after the ejection and letting the topic immediately die doesn’t really help anyone – except Pineda and the Yankees, of course. If this incident happened with YES Network, maybe Girardi would have a gripe. But despite their supposed east coast bias, ESPN isn’t a Yankee property, and they need to fully explore all situations as opposed to leaving the viewers in the dark just to please one of the 30 teams in the league.