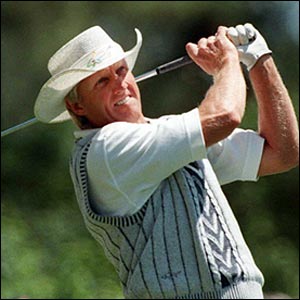 After Greg Norman revealed in August that Fox had offered him a job to be their lead golf analyst, there was only one direction that Fox was going to go in their maiden voyage with the USGA.

Now it looks like we’re getting very close to seeing it become a reality.  Sports Business Journal reports that Joe Buck and Greg Norman will be the men in the 18th tower to be the faces of Fox’s US Open coverage beginning next year.

Joe Buck and Greg Norman will be Fox Sports’ top on-air voices when the network debuts its golf coverage next year, according to several sources. The two will be set up in the 18th green tower at the ’15 U.S. Open, when the event will be held at Chambers Bay outside Seattle. The decision to tap Buck and Norman comes as somewhat of a surprise, as neither has announced golf on television before. Norman, a two-time British Open winner, is a member of the Golf HOF. Buck is said to be a scratch golfer who is knowledgeable about the sport. Buck already is Fox’ top voice, anchoring the network’s “A” announce teams for the NFL and MLB. The network has not finalized other announcer positions yet, and it is not clear when the network plans to formally announce Buck and Norman.

When it was announced that Fox had shocked the sports media world by snatching USGA rights away from NBC, we all had a good laugh about Gus Johnson potentially announcing the US Open.  However, Joe Buck was always going to be the only logical choice.  See?

In all seriousness, Joe Buck is going to be the lead announcer for the US Open. I can't see Fox going any other direction.

It’s a very predictable move in a very predictable industry.  Men at the top like Buck, Nantz, and Costas are going to get every major assignment that’s available at their respective networks.  The top announcing assignments are more secure than Supreme Court appointments and I doubt Fox even considered looking elsewhere.  While it would be great to see new faces and more diverse voices given these opportunities, it’s not going to happen.  Executives have very close relationships with these face-of-the-network type individuals and it would take the jaws of life to break into that elite fraternity.

That’s not to disparage these top announcers, though.  As stated in this space previously, I’ve warmed up to Joe Buck in recent years.  He’s never called a golf tournament before, but that doesn’t mean he’s not knowledgable about the sport.  He should do a decent job in the booth for Fox, as should Norman.  The Shark has all the tools needed to be a breath of fresh air as a golf commentator.  In all honesty, Fox probably couldn’t do better with their top announcing tandem and I’m looking forward to seeing what Buck and Norman can bring to the sport.

However, this is just the first step for Fox’s US Open coverage.  Golf is unique in that the 18th tower announcers are only part of the broadcast.  The decision for Fox will be how they construct the production elements.  Will they call on Norman to hover over the entire broadcast like Johnny Miller on NBC?  Or, will they keep the main pairing more in the background like we see at CBS with Jim Nantz and Nick Faldo?  Who they tab as on-course reporters and hole announcers will go a long way in the quality of their golf coverage.

Another major question will be with regards to the presentation of the coverage.  Fox is aiming to revolutionize televised golf, and that has some golf fans worried after seeing those efforts backfire in other sports.  The glow puck, Slider, “Football vs Futbol” and the network’s propensity for band shots during BCS coverage quickly come to mind.

Then again, if Fox turns to this to make golf more exciting, maybe it won’t be all bad…