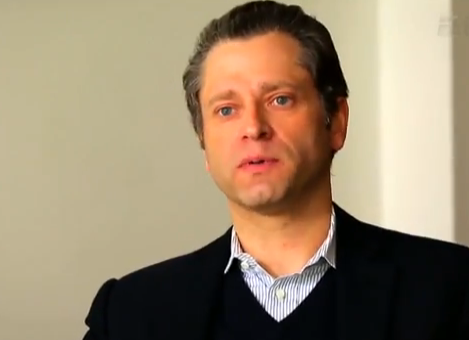 As I reported yesterday, Tuesday’s edition of E:60 featured a powerful and important story by Jeremy Schaap and producer Beein Gim about abhorrent conditions for migrant workers who are coming to Qatar to construct the $200 billion in facilities for the 2022 World Cup.

Things are so bad, there are estimates that 4,000 workers could die prior to the start of the matches. All so people could watch soccer.

The E:60 piece (preview above) shows Schaap and the crew defying regulations in Qatar and going to where the migrant workers are being housed. There’s also stark footage of the body of one of the workers being burned at a funeral in Nepal.

The Guardian broke the original story, but the graphic images of the E:60 piece takes it to another level. I talked to Schaap about one of the best pieces of journalism I have seen from ESPN. If you missed it, the E:60 episode will re-air Saturday at 7 a.m. ET on ESPN2. Set your DVR.

What was behind E:60′s decision to do this story?

You documented the abhorrent conditions where these migrant workers are housed. In the piece, you said you risked arrest by shooting there.

We didn’t have permission to go to any of those places. Technically, we were breaking the law. I wouldn’t say we were nervous. We weren’t in a combat zone. But they could have arrested us and made things uncomfortable. We had to be discreet, or as discreet as you can with cameras and 7-8 people going through there.

I’ve seen wretched conditions before. What was so striking was the way it contrasts with the lives of the typical Qatari. The per capita income of Qatar is more than $100,000 per year. We were just a short drive from the luxury hotels. Everyone drives around $80,000-90,000 Toyota land cruisers. And then you see how these workers are living. It’s an incredible contrast between these two worlds.

How can anyone be allowed to live like this? The Qatari say (the workers) are making more money than they would (in their home countries). That doesn’t mean they should be treated like animals.

The piece went 17 minutes, and there were still so many harrowing things we saw and heard about that we couldn’t get in.

The final scene is intense. You show a body being burned during a funeral for one of the workers in Nepal. What was that like?

I wasn’t personally in Nepal, but Beein and the crew were. Our cameramen (Jesse Edwards, Joel Edwards and Mike Bove) literally were covered with human ashes after shooting that scene.

There are coffins coming back every day from Qatar. On average, one migrant worker per day is dying. That scene was so powerful because of the reality of what’s happening over there.

After this year, Fox Sports owns the rights to the next two World Cups, including the one in Qatar. If ESPN had the rights for the Qatar Cup, would E:60 still have done this story?

Definitely. ESPN still has a World Cup we’re showing in a few weeks. It is the biggest project in the history of the network. FIFA and ESPN work closely together. It’s not as if we’re going out of business. We will be bidding for future World Cups.

I know deep in bones this is something we would be doing regardless of who has the Cup in 2018 and 2022.