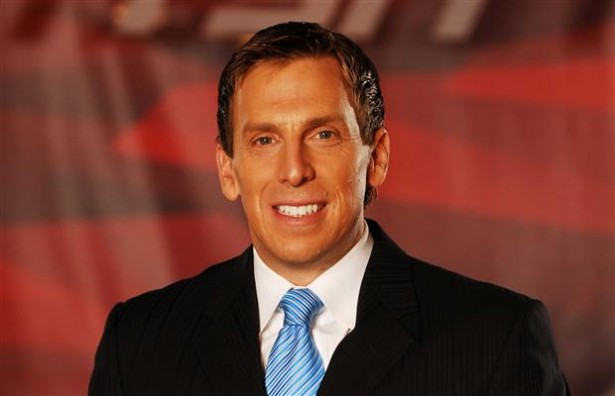 There are few hosts as well-liked in any sport in North America as James Duthie. As the host of The NHL on TSN for the past dozen years, he brings both gravitas and a wicked sense of humor through double and triple overtimes, marathon trade deadline shows and monkeys picking playoff games. You ask around, and you’ll find few broadcasters Canadian hockey fans like better.

The nature of The NHL on TSN will change greatly in the 2014-15 season. They will be limited to regional broadcasts during the regular season in Toronto, Montreal, Ottawa and Winnipeg, while Rogers takes over national coverage of the game. There will, just naturally, somewhat of a change in habits.

From an American hockey fan, in particular, I will no longer even get to see the aspects of The NHL on TSN that I could see through NHL Network and NBCSN throughout the years. I will most assuredly miss their coverage and their personalities. I think I speak for a great number of American fans when I say that.

Duthie, however, rejects that idea for the most part, refusing to count tonight’s broadcast of Game 4 between the Blackhawks and Kings — the last TSN will air nationally for at least 12 years — as a farewell, and rightfully so. He’ll continue hosting, perhaps have a new show built around the network’s ‘The Quiz’ segment, and is working on a book (with, as he says “less poop stories” in it than former TSN colleague Jay Onrait’s book). We spoke about that, along with a bunch of other topics, on Friday.

Steve Lepore: You became the host of The NHL on TSN in a bit of an odd way.

James Duthie: I came to TSN and hosted football and basketball first, and then I went to SportsCentre and was hosting SportsCentre for a couple years. I was doing some football play-by-play, and that’s where I kind of thought my career would be tracking when I got into this business. Hockey and football are sort of 1 and 1A to me as my favorite sports but I always thought football play-by-play was what I wanted to do, so when TSN got the rights back, I didn’t really even apply or politic for a job because as much as I loved hockey, it wasn’t where I thought I was headed.

They hired a woman from Vancouver named Linda Freeman, whom I actually knew — because my last job before TSN was in Vancouver, and she alternated between being the weather person and hosted a breakfast show out there — and we were actually good friends, she was one of my favorite people, an incredibly nice woman. Then they hired her to host NHL on TSN and I was really happy for her, I thought it was fantastic, because she was a really good broadcaster. Then, I guess things just didn’t work out for whatever reason.

I was just oblivious to all of this, I was just going about my business doing SportsCentre, and I think two days before the season started, my boss called me. I was on a guys’ golf weekend in Muskoka. The VP of TSN, Rich Chisholm, called me and said “Can I come up to your house tonight?” Ricky and I were buddies, but… the boss had never come up to my house [laughs]. We’d have lunch one in a while or play golf, so I was driving back from Muskoka trying to figure out what was going on, and he asked if I wanted to host The NHL on TSN.

Like I said, it was very strange. I had never thought about it, but as it was presented to me I was like: “Well, I love hockey and this is something I’d love to do” and made the decision there, and two days later I was on the air. It was extremely whirlwind, because I had no idea what we were working on, what segments we were producing… the producers and the bosses had been working on this for six months, and I came in 48 hours before. It was crazy, but it was fun.

SL: Who was the panel at that time?

JD: There was no panel, and that’s why they’d hired Linda. It was actually Keith Pelley, who’s now the head of Rogers, he wanted to do things differently, and I think they envisioned an MTV (or MuchMusic) at the time, you know, MTV’s changed so much. You’d have one host who’d be walking all over this massive studio. They had Bob McKenzie and Dave Hodge, who’d be their panel, but it was not a traditional panel. She would walk over to them and ask and they’d go off talking. There’d be maybe another analyst in the studio, they had a hockey rink, and had a couple of guys out skating, I think at the time Dave Reid and Rick Nattress were the first two in there.

To give you an idea of the first night, I had this sort of elevated desk like some sort of royalty, and then over to one side were Dave Hodge and Bob McKenzie were at another desk, like a panel. Dave Reid and Rick Nattress are on this skating rink we had in the back, kind of like what the NFL guys have done in the States with the field. Ron Wilson was back at another desk, and I basically would walk all over the place talking to the guys, and that’s kind of the way it was for the entire first season, we had this revolving group. We had puppets… have you heard the legend of the puppets?

SL: I think I’ve heard about the puppets?

JD: We had puppets who were kind of a combination between Statler and Waldorf from The Muppets and Wayne and Garth, commenting on it, with comedy writers. We had live bands in, it was basically a circus [laughs]. It’s funny, a lot of people laugh at it, but we actually had a lot of good times that year. But it was only I think in about year three where we got more traditional. Mark Milliere — who’s senior VP of TSN now — took over hockey and brought in Steve Dryden, who was the editor of The Hockey News.

They more formalized it into what you see today with a panel and the more traditional way of doing things for the last 10 years.

SL: You said this wasn’t really your plan, how long did it take you to find a groove within that job? I should note that the lockout year was within the first two or three years of that.

JD: It would probably be post-lockout. I wasn’t a huge career planner, to be honest with you. I never had five-year goals or “where am I gonna be”, but I was enjoying doing SportsCentre. I was doing it with Dutchy (Darren Dutchyshen)  and I was doing a little football play-by-play on the side, so when I got into hockey I just said, “well, let’s see what happens.”

The lockout was a miserable year, a miserable, miserable year. We were doing classic NHL games to fill the holes, and we were actually doing intermissions for games that had already taken place, which was very bizarre, with a panel [laughs]. “So, what do you think’s gonna happen in the third?” “I think Boston’s probably gonna get a too many men on the ice penalty, and the Habs will tie it late and win it in OT.”

Probably just the year after the lockout, hockey came back, and it was so good when it came back. We started to get into a rhythm with some really good people on the panel. It was probably about three years in when I thought I could do this for a long time and be very happy.