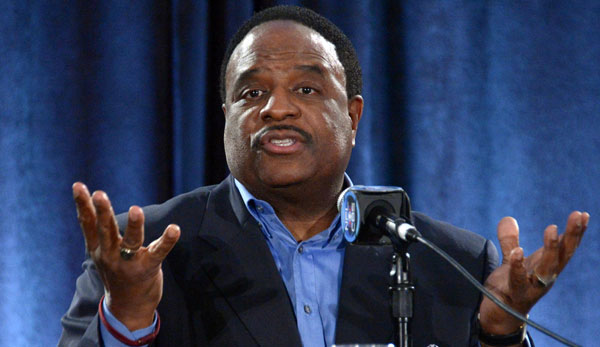 Earlier this month, CBS Sports Chairman Sean McManus told the Hollywood Reporter that he would let the network’s talent decide individually whether or not they’d use the Washington Redskins’ increasingly controversial nickname on the air.

Generally speaking, we do not tell our announcers what to say or not say,” said McManus. “Up to this point, it has not been a big issue for us. Last year, it was simmering; now it’s reaching a hotter level. But we probably will not end up dictating to our announcers whether they say Redskins or don’t say Redskins.”

Late last week, while part of a panel at a CBS News live symposium focusing on the evolution of civil rights, the veteran host of “The NFL Today” made it clear that he’s pro-change.

“I firmly believe that this is a people issue. If, in fact — to me, this is my opinion only, not representing CBS Sports, or News — if the name is offensive to a group of people, then do the right thing and change the name. It’s as simple as that.

“I know people will engage in an argument and say, well it hasn’t been an issue all this time. Yeah, well, the civil rights issue was one where ‘that’s just the way it was’ for a long period of time, right? So that holds no basis and substance to me. Do the right thing. You know, a number of years ago, when I was a kid, there was a restaurant chain called Sambo’s, which, as I understand was the last name of two guys who owned the restaurant chain. But it was offensive to black people, so they changed the name, except for the one franchise in California I believe it was. Well, so, if in fact it’s offensive to Native Americans — and there doesn’t have to be unanimity on this, and don’t just have a intractable attitude saying, I’m not going to change — that’s wrong as far as I’m concerned. I’ll get in trouble with that, but I stand on principle.”

Four networks broadcast live NFL games, and now the faces of two of those networks’ lead-in shows — Bob Costas from NBC and Brown from CBS — have come out in favor of a new name for the franchise. Considering how much face time those two get in major time slots, you’d be crazy to underestimate the potential impact from that.

The Redskins play most of their games on FOX and aren’t currently scheduled to play on NBC’s Sunday Night Football this season. But ESPN will air two of their games, which could make things interesting if Chris Berman decides to follow the trail being blazed by Costas and Brown.