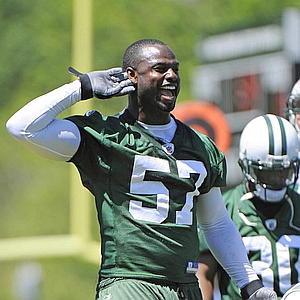 On Monday, CBS Sports held its annual NFL on CBS Media Day in New York allowing reporters to hear from the network’s announcers and analysts. Awful Announcing was there to talk to some of the people who will call and analyze the games during the 2014-15 season.

Former New York Jets and Baltimore Ravens linebacker Bart Scott joined CBS last year as part of the CBS Sports Network program, “That Other Pregame Show.” His work impressed CBS to the point where he will be on “The NFL Today” this season along with fellow incoming analyst Tony Gonzalez. Scott and Gonzalez replace Dan Marino and Shannon Sharpe who were let go after last season.

Awful Announcing talked with Scott about joining the NFL Today and how it will be different joining the CBS Mothership after being on the Triple A farm team in 2013.

Awful Announcing: Last year you were on “That Other Pregame Show,” now you join the big boys on CBS. How do you feel about this?

Bart Scott: I feel great. I’m excited. I’m excited I’m not the only rookie. It’s like coming into the league together. Me and Tony (Gonzalez) will be starting off. You know even though I did have a show last year, I still consider myself a rookie because this is the big time. I was on JV (junior varsity) last year and now I’m coming up to the varsity. I think I’m ready. I’m excited.

I think me and Tony can bring something different because we’re fresh off the football field. We can bring a perspective of what the current players are thinking about. And Coach (Bill Cowher) did it both as a player and a coach. And Boom (Boomer Esiason) is a media mogul with his radio show and how in tune he is with what the fans think. And JB (host James Brown) is the best in the business.

AA: You started last year, but you’ve also done some media before then as a player. What was it like to do this week after week knowing you had to come up with an opinion or take when the red light came on?

BS: Well, football is the gift that keeps on giving. There’s always a storyline. There’s always something going on as breaking news. The storylines are tremendous. It’s the ultimate reality TV. It’s never hard to find something to come up with. It’s spontaneous because the game gives so much to you.

AA: What did (That Other Pregame Show host) Adam Schein teach you when you had to work with him last year?

BS: He’s the ultimate professional. As a player, you had one view of Adam Schein. We had our run-ins, but as a professional, you understand that was his job and last year gave me a greater insight to the responsibility of media and what our role is. It’s pretty much to spark conversation, to represent one side and have a stance and a belief and try to explain this game to people.

Adam is a great maestro. I think he conducted the game. He taught me professional techniques that I will use. He was very informative and he was very receptive. You know, sometimes actors hate when rappers and entertainers come into their business. He accepted me as a former athlete and treated me as one of his own.

AA: Now that you’re part of the media, did any of your friends who are still playing say anything to you about the comments you have made on TV?

BS: No, not at all, because anybody who knows me I’m going to say what I feel and you can always respect that, knowing that I believe what I say and I’m going say what I feel and it’s authentic. There’s no agenda behind my comments. I’m just reporting what I see and there’s nothing I wouldn’t say to them to their face.

AA: So what’s the approach you’re going to take to The NFL Today that you leaned last year from being on CBS Sports Network?

BS: Well, understanding that I have to pace myself. Sometimes, I can get caught up in getting too emotional and not being able to deliver the message in a clear, concise manner. I’ve been working with a vocal coach to make sure I can be the best analyst I can be and make sure I can give a message that everyone can receive and do it at a pace that everyone can digest.

Scott joins the cast of The NFL Today with fellow new analyst Tony Gonzalez and holdovers host James Brown, Bill Cowher and Boomer Esiason during Week 1 of the new season on Sunday, September 7 at noon ET.