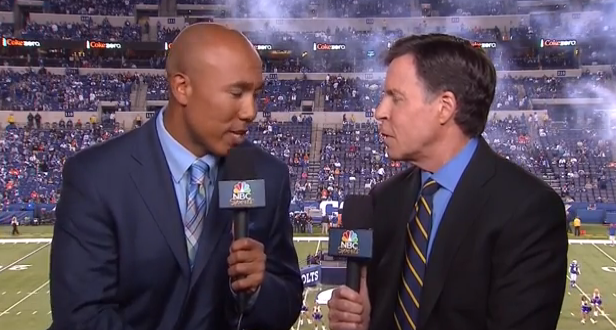 The former 4-time Pro Bowler is the definition of “surplus to requirements.”

On Sunday Night Football, Ward’s role is minimalistic at best.  He shows up on the pregame show at the stadium with Bob Costas and Cris Collinsworth, does a 30 second hit at halftime… and… just leaves I guess?  NBC flies Ward to the stadium each and every week, and pays him a decent chunk of change, for what amounts to a couple minutes of actual airtime on Sunday Night Football.

Ward’s halftime spot with Costas at the stadium has become something of a running joke for just how pointless it truly is.

And that will do it for your Hines Ward 30 second halftime report.

Another 45 seconds on TV in which Hines Ward made way more than you do in a month.

My new goal in life is to land the Hines Ward Gig.

Make no mistake – Hines Ward has a great gig.  Maybe the best gig in all of television.  He gets a broadcast network salary to go to the biggest NFL game every week and only has to answer 2 easy questions from Bob Costas and his work is done!  Why, it’s almost an easier job than being a sports blogger!  Here’s the transcript of Costas’ and Ward’s entire exchange from halftime Sunday night during Panthers-Steelers.  Prepare to be amazed by these insights…

Costas: Hines, your old team is still in a touchdown drought but they do have 3 field goals and a 6 point lead at the half, what have they done and what do they need to continue to do in the second half?

Ward: I think they need to continue to establish the run with Le’Veon Bell, he’s going to get things going, but also find greater ways to get Antonio Brown the ball, he’s very close to breaking one.

Costas: [talks about Brown and Bell’s stats] How has Cam Newton impressed you?

Ward: Well he looks a little rusty a little bit.  You can see he’s still trying to find his rapport with his wide receivers.  But if you’re the Carolina Panthers, you have to start taking a shot with Kelvin Benjamin.  You have to use his size to try to create offense and maybe you get a pass interference or something.

Costas: All right Hines, thanks.

Now Ward’s job at NBC isn’t limited to just SNF as he has a role on their other football properties as well, but one has to ask what purpose he serves on these NFL telecasts.  We’ve even lost out on Bob Costas’ halftime lecture to America so far this year!  Doesn’t NBC realize there were prospective students around the country that were trying to pass that off as college credit?

The eleventy billion people on Sunday Night Football is the closest thing in real-life to that famous bit from The Naked Gun when the broadcast booth was overflowing with all sorts of famous sports announcers.  (And yes, there’s a Sporcle quiz to see if you can name them all.)  The only thing missing here is the ghost of Dr. Joyce Brothers with Hines and Bob.

Couldn’t Rodney Harrison and Tony Dungy give two generic answers about the first half?  Couldn’t NBC use that time to at least show more halftime highlights?  Couldn’t they at least replace Hines and Bob with Hoda and Kathie Lee and give us something more entertaining?