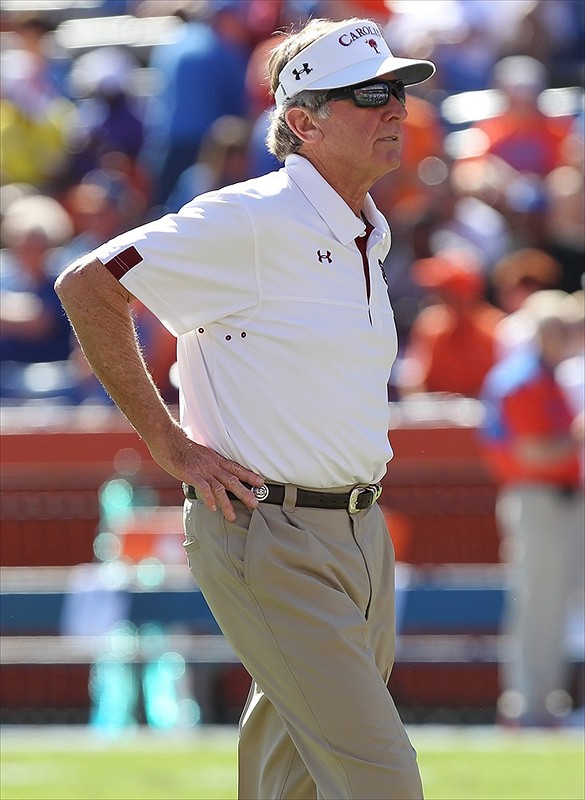 If you had to consider the most fascinating American sports figures of the past quarter-century and then had to reduce your list to a top 10, Stephen Orr Spurrier would be on it.

Baseball owns so many oddball characters, while the NFL has its share of commanding figures. The individualism contained within basketball enables the sport to create some rather large personalities such as Charles Barkley and Shaquille O’Neal. Yet, if you’re going to select the richest, most layered psychological portraits in major American sports since 1989, Spurrier has to be there.

His one-minute press conference following South Carolina’s loss to Tennessee on Saturday night reminds us of this, though surely not for good reasons:

This specific episode in Spurrier’s endlessly colorful career is not supremely interesting in microcosm. (Mildly? Sure. Supremely? Not quite.) Spurrier watched his team blow another fourth-quarter lead of at least 13 points within the same season. That would drive any coach batty. Spurrier, a product of Johnson City, Tenn., hates losing to the Volunteers, and now he’s lost to Butch Jones two straight seasons. Last year’s loss came after he made a few quips about the instability of the Tennessee program. Any “Spurrierologist” knows this loss — coming to Tennessee — cut deeply for the Head Ball Coach. (Reminder: Any Spurrierologist uses “Head Ball Coach,” and NOT the “Ol’ Ball Coach” label which sadly persists in many circles.)

What’s far more fascinating and instructive is how this event fits into the larger whole of Spurrier’s life and his SEC coaching career in particular.

Spurrier coached in the United States Football League and at Duke before taking the job at Florida on the final day of 1989, but it’s his SEC existence which has given him his greatest highs and lows. The Washington Redskin fling was too short for it to amount to anything. Spurrier ducked out after two seasons rather than collect a lot of Dan Snyder’s money in 2004. Plenty will say with good reason that Spurrier did embarrass himself in the NFL, but those of us who value college football can just as readily say that Spurrier’s venture showed the limitations of prevailing NFL attitudes, attitudes — it should be said — that “college boy” Pete Carroll’s Super Bowl title did much to erode. (Chip Kelly can further erode the NFL mindset if he ever wins a Super Bowl with the Philadelphia Eagles.)

Love him or hate him, Spurrier’s behavior has made him impossible to look away from as long as he’s coached in the SEC. This behavior sometimes manifests itself in the best of ways, such as being outspoken on behalf of student athletes. Spurrier’s best qualities are documented here in a piece I wrote at The Student Section back in July.

However, this behavior sometimes manifests itself in very ugly ways, as was the case with Spurrier’s treatment of Ron Morris, a sports columnist for The State, a newspaper based in Columbia, S.C.:

Spurrier’s hatred toward Morris led to this sorry incident in the history of journalism. Spurrier gave rise to that, and anyone who loves Spurrier should not — cannot, must not — hide from such a reality. It’s his worst side.

When contemplating all that’s great and all that’s bad about Steve Spurrier, one is left with a remarkably layered portrait of a person who is simultaneously so evolved and so unbecomingly petulant.

There is, in Spurrier, an all-too-visible combination of genius and a brilliant person’s tendency to become whiny or something much worse than whiny at the drop of a hat. Spurrier is a man who makes very fine distinctions — he hates cheating and will be the first to accuse someone else of doing so, but as long as he believes he is staying within the rules, he will be as cutthroat as he possibly can. The lines between what’s acceptable and not are very precisely drawn for (and by) Spurrier.

What has made him such a constantly polarizing figure is that it’s been hard to drill deeply and discern exactly where Spurrier establishes those boundaries. Fans and opponents, apologists and detractors, have both lacked the patience needed to sift through these dividing lines. It’s been too easy (and satisfying, in much the same way one is drawn to junk food instead of whole grains and vegetables) to simply enjoy or argue over the latest Spurrier quote instead of knowing the man, but after all these years, most American sports fans probably have a very simplified view of him, almost like that of a caricature or a cartoon.

Spurrier is, for many, the visor-throwin’, headset-slammin’, quote-droppin’, nemesis-proddin’, rival-pokin’ country boy who loves competition and his time on the golf course. That’s part of him, yes, but it’s hardly the whole story. What this press conference does (or can do, at the very least) is to remind us that for all the ways Spurrier has this keen internal division between what he feels is right and what he feels is wrong — something that has served him well and given him a plain-spoken eloquence on a number of college sports issues — he often loses track of these divisions.

The great contradiction of Steve Spurrier’s life — brought to the forefront in his one-minute presser from Saturday — is that while he’s been able to defy the suffocating pressures of the coaching profession on one level, he has succumbed to those pressures on other levels.

Spurrier has often been able to live up to his own mantra, “Work smarter, not harder.” Spurrier has managed to carve out a career in which he hasn’t spent forever inside a film room, allowing his life to be consumed by football. Spurrier is physically healthy and energized, half a year before turning 70 next April. He has lost games and taken hits at South Carolina, never more than this year, but that doesn’t mean he’s lost his drive. He is as upset at the reality of losing as he’s ever been, mellowing only to the extent that visor tosses aren’t nearly as frequent as they were in the first half of the 1990s at Florida.

Yet, while succeeding so handsomely in terms of preventing football from hijacking his holistic health, Spurrier has failed — as he did on Saturday — in terms of being respectful to the people who, by amplifying his quips and quotes, have added to his legend and stature through the prism of the printed word and the mass-distributed image.

Working smarter and not harder — not letting football consume him — represented Steve Spurrier at his best, spotlighting his awareness of the need to live a full life with happiness and peace of mind. In different words, this boils down to “not letting the pressures or the passions of sports get to you to the point that you become a lesser person.”

Yet, the one-minute presser… and the uncalled-for shot at Auburn in 1994… and the Ron Morris episode… and the way he treated Terry Dean in the early 1990s… all show a man who, while such a luminously positive example for his coaching peers when at his best, has been genuinely hurtful to others when at his worst. No, Spurrier hasn’t committed truly awful sins (think of George O’Leary or Joe Paterno), but the contrast between his two incarnations is as striking as that of any sports figure I’ve witnessed since I first fell in love with sports as a five-year-old in 1981.

There’s a part of Steve Spurrier that has always wanted to call the world to be better.

There’s also a part of Spurrier that constantly announces to the world how far he has to go to reach his own standards.

In the good times and the bad times, in moments of success and failure, in portraits of peace and turmoil, this split between his two selves makes Steve Spurrier as rich a personality as American sports has seen.

Whether we want to admire him when he says something enlightened or smack him when he does something foolish — as was the case on Saturday — we are constantly reminded that 20 years ago and today, Spurrier’s most essential quality is not his talent as a football coach or his stature in the annals of the SEC.

It’s how plain his virtues and flaws have always been.

Few prominent sports figures have allowed us to see, in such stark relief, the complexity of the human condition.