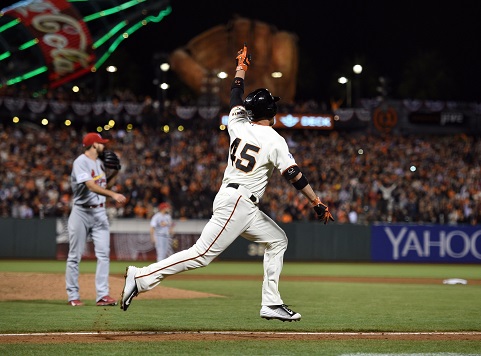 We’ve now entered the worst part of the year for baseball fans – the offseason. No meaningful games will be on TV until April, and all we have to hold us over for the next five months are the Hot Stove season and Spring Training games. However, we can still reflect on a thrilling Postseason, and how the networks covered those games. This is the good, the bad, and the ugly of the 2014 MLB Postseason.

GOOD: studio coverage. Every network shined here. Fox’s Kevin Burkhardt and TBS’s Casey Stern were both capable (to say the least) hosts. Gabe Kapler continued his fantastic work and, for my money, is the best MLB analyst going today. Pedro Martinez also turned in a typically strong performance for TBS, with his amazing rant directed towards Ned Yost after the AL Wild Card game fitting right in with the chaotic action on the field. TBS’s Gary Sheffield was shaky, but didn’t actively destroy the efforts of Stern and Martinez. Fox’s Frank Thomas was also solid, and Nick Swisher was a breath of fresh air. As for David Ortiz, two games isn’t enough to make a definitive statement in either direction. He didn’t stand out at the desk like both A.J. Pierzynski and Jimmy Rollins did in 2013.

GOOD: ESPN. ESPN got back in the MLB Postseason with just one game this year, and while the final score ended up as a blowout in favor of the Giants in the NL Wild Card game, ESPN’s crew did a good job. Dan Shulman is one of the best play by play guys in the business, and he more than held the fort down for the Worldwide Leader. Calling John Kruk “an acquired taste” might be too kind, but when he’s focusing less on being funny and more on breaking down the action, he’s damn good at what he does. I’m interested to see if Curt Schilling will be healthy enough for a full workload in 2015 with Shulman and Kruk, because I thought the trio was fantastic in their short time together this year. ESPN also went all-out with live pregame and post-game shows at PNC Park, and you can’t do much better than Baseball Tonight.

GOOD: Fox’s JABO second screen broadcast. This is what I was looking forward to the most in terms of playoff coverage, and it absolutely delivered. The second screen broadcast of Game 1 of the NLCS started off a little awkward, but once the panel began to get in a swing and focus more on the game and less on explaining statistics that they’d shoehorn into the conversation, it started to hum along like a well-oiled machine. I think Fox also found a future television star in Padres manager Bud Black, who showed himself to not only be an adept baseball mind, but a man who’s comfortable in front of the camera.

GOOD: MLB Network broadcasters. Bob Costas is a polarizing figure because of his propensity to moralize and drag the spotlight to shine on himself, but he’s a damn good baseball play by play broadcaster. He showed that during the one game he called during the NLDS, though pairing him with Harold Reynolds (and Tom Verducci) was a disappointing turn of events. MLB Network’s second game was called by Matt Vasgersian and John Smoltz, who are fantastic and should have gotten more airtime together during the regular season.

BAD: dugout reporters. I split the difference here to not single out any particular person. Ken Rosenthal and Buster Olney were both fabulous, especially Rosenthal’s report on the tragic death of Cardinals outfielder Oscar Taveras. And then…there are the others, who were either flat-out bad or otherwise unmemorable. Erin Andrews was painful in her role for Fox, topping the World Series off with some brutal lines during the trophy presentations after Game 7 (which were forgotten in the wake of Rikk Wilde’s meltdown). Her questions were also very generic and lacked insight – I don’t know if a producer is feeding her these or what, but focusing so much on how players and coaches “feel” doesn’t make me care about what happened during the game. As for TBS, I loved the idea of using a local broadcaster in each team’s dugout during the ALCS, but unfortunately, neither stood out. Neither did the “regular” dugout reporter employed by TBS, Matt Winer or Jaime Maggio.

BAD: TBS broadcast booth. TBS’s A-team of Ernie Johnson, Ron Darling, and Cal Ripken wasn’t actively bad, they were just completely uninspiring. Johnson seemed as if he was just waiting for the NBA season to start, and several of his calls at big moments fell flat. Darling’s work has seemingly gone backwards since he’s taken on a more prominent national role, and he didn’t offer much in the way of original insight. Ripken is better off in the studio, as he’d go dead quiet for minutes on end. The B-team was better, carried by play by play announcer Brian Anderson, someone who is able to show the right amount of emotion when calling plays and knows what he’s talking about. Dennis Eckersley is a fine, solid color commentator that doesn’t rock the boat too much. Joe Simpson was better in this booth than he is when calling Braves games with Chip Caray, but that’s not saying much of anything. TBS is going to be in this for the long haul, and they really need to get a better lead play by play announcer – either promote Anderson to the top spot, or go outside the nest to get someone more accomplished in baseball than Johnson.

BAD: Fox broadcast booth. We’ll start with the good – I love the Smoltz/Vasgersian duo. They’re awesome. Vasgersian might get a little too animated at times, but would you rather that or the monotony of Johnson at TBS? Smoltz is also one of the best game analysts today, and probably should have gotten the full-time job at Fox next to Joe Buck. Speaking of Joe Buck, people are going to hate him no matter what, but I think he did a decent job this Postseason. Is he the best MLB play by play guy in the game? No, of course not. But nationally, the only guys better are Shulman, maybe Vasgersian, and possibly ESPN’s Jon Sciambi (who is fantastic and deserves a more prominent role, as impossible as that may be).

As for his broadcast partners…well, Harold Reynolds is not good when he’s expected to talk for three hours. On MLB Network every so often, they do these little “diamond demo” segments where former players (including Reynolds) act out what happened with a play or situation on the field, and actually give you some insight. They’re great, and Reynolds thrives in that role. But when he’s sitting at a desk or in the booth opining about action as it happens, it’s painful. Verducci is someone that could be a good broadcaster one day, but he’s still very raw in his role. I’d like to see him and Buck get a turn in a two-man booth, while Reynolds takes a more hands-on role in the studio breaking down plays. But of course, that’s not going to happen – at least not yet.

UGLY: shift graphics. The only network that did this properly was MLB Network, who (all season) used a graphic in the top right corner of the screen indicating the positioning of the fielders at all times. It wasn’t intrusive, was informative, and wasn’t insulting to the viewer. Fox and TBS made a habit of using a shot from behind the plate and putting MASSIVE graphics up on the field indicating where the players were – even if they weren’t shifted. I know shifting is a big part of the game, but stop the madness.

I was probably kinder than I should have been here. And yes, there were plenty of bad elements during this year’s Postseason. The good news is that all of the elements that were really that bad could be changed from within. Erin Andrews didn’t do well? Replace her with Jon Morosi. TBS’s A-team struggled? Promote the B-team PBP announcer and mix and match with analysts. Fox’s A-team drove people insane? Pair Buck with Smoltz. The shift graphics were awful? Steal MLB Network’s idea. The MLB Postseason isn’t NBC’s Premier League coverage or ESPN’s World Cup coverage – there’s room for improvement. But a complete overhaul isn’t necessary, and that’s probably the best possible outcome after a solid Postseason for Major League Baseball.