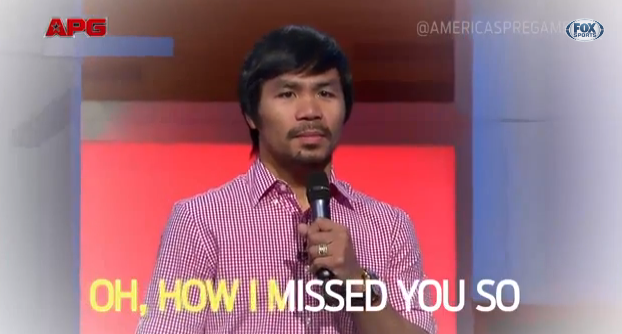 Sometimes… Fox Sports 1 can just be weird.  There’s really no other word you can use to describe America’s Pregame bringing boxing great Manny Pacquaio on the program to sing a ballad about the NFL coming back this week.

Pacquaio’s singing career is really one of the more perplexing tangents in the entire sports universe, but why would you have him come sing a song about the NFL?  Boxing?  Ok.  UFC?  That would make some sense.  But the NFL?  You already have an NFL Hall of Famer who works in your building that has a bizarre singing career of his own – Terry Bradshaw.  I would have loved to have been a fly on the wall in the production meeting in Los Angeles where this got green-lighted, just so I could gain some level of understanding.

As far as the quality of the song goes, it’s not exactly Kenny Rogers singing Lucille…

FS1 has had some quirky, unusual, unique segments before.  Many of which were contained to the late Crowd Goes Wild.  For the record, Pacquiao had a pillow fight with Miss USA there once, so apparently he’s just going to be brought in to do crazy attempts at viral stunts for the network.  I guess a prizefighter needs something to do on his days off.

Some of these weird FS1 bits have worked.  Others have not.  I’m going to put this one in the latter category.