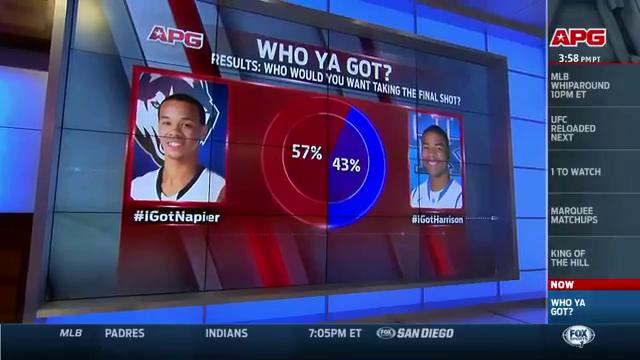 With the first year anniversary of Fox Sports 1 approaching on Sunday, this week is FS1 Week at Awful Announcing.  Over the course of the week, we’ll analyze the highs and lows of the first twelve months at “the one for fun” and what is in the network’s future.

Today, Ben Koo looks at Fox Sports 1’s struggle to reach new viewers and why it’s still mostly an unknown to sports fans.  He asks the question, is there anything on Fox Sports 1 worth setting your DVR for?

Generally speaking, about 25% of my social circle have a feel for what I do professionally. Those who do usually stick to talking about Awful Announcing and sports media topics as hosting environments, ad optimization, SEO, and social referrals isn’t really good BBQ discourse.  Many times over a prompt such as “What’s going on in the sports media world?” lends itself to a brief discussion on FS1 which typically goes like this:

Me – “Well Fox launched FS1, which they hope to be their ESPN competitor.”

Possible response 1 – “Really? Haven’t heard of it. Any good?”

Possible response 2 – “Oh yeah, I heard about that, but I don’t think I get that channel. Any good?”

Possible response 3 – “Yeah I checked it out. Nothing special right? Am I missing anything?”

I have yet to come across this response below from anyone spanning a diverse circle of friends, family, and contacts, all of which are pretty engaged with sports and sports coverage.

“Love me some FS1! I probably watch more FS1 than I do ESPN.”

We know there are people who exist that have made the move to FS1 as their primary sports channel. It’s my belief they’ve done so more out of spite for ESPN than anything FS1 has actually done, and many of these sports fans are college sports fans who feel their school of choice has been done dirty by ESPN at some point.

But as the ratings and the general meh reaction to FS1’s original programming show, the network as a whole has a bit of a reputation problem. What’s honestly good about Fox Sports 1?

A month ago, I wrote about how FS1’s programming was respectable, but only if you were very KIND with the context in which you were judging.

“It’s like when you were a little kid and you cooked or attempted to cook breakfast for a parent on their birthday, Mother’s Day, or Father’s Day and they smiled after first bite and said “Oh? This is… good.”

The attempt and finished product is good only with the context that takes into consideration the lesser planning, resources, talent, and background compared to the competition. A side by side comparison to ESPN (the breakfast equivalent to a buffet at a swanky Vegas hotel), isn’t as kind.”

FS1 has seen a number of shows cancelled in their first year and the network is still trying to find its own original programming footing. The same is true for NBCSN as the network is making their third attempt at a general sports highlight show this week with the NBCSN Sunday Sports Report. And for CBS Sports Network, who saw their attempt at a midnight talk show, Lead Off, also cancelled. It’s tough for any non-ESPN network to gain a foothold with original studio programming.

So far, FS1 has offered similar fare to ESPN programming – a football show here, a NASCAR show there, and a sports highlight show in the evening. Even the shows that were supposed to be different (Crowd Goes Wild, Fox Sports Live panel) still talk about the same stories ESPN does.

My advice to FS1 would be this: make something different. Make something good. Outside of The Ultimate Fighter, what else is really unique on FS1 from an original programming perspective?  If it’s a bunch of people in studios talking about sports, I’m not going for it.

I’m actually trying to ween myself off shows where it’s a bunch of people sitting and talking about sports. If you look at Fox Sports 1’s daily lineup, that’s all it is – whether it’s Mike Francesa, NASCAR Race Hub, America’s Pregame, or Fox Sports Live.

Yes, it’s low rent programming that fills your schedule but if that’s all you really have, how is word going to spread to the masses that you’re different than ESPN? People make fun of NBCSN’s hunting and fishing shows, but at least it’s something different that reaches a niche audience.

How many people are really going around telling people “YOU HAVE GOT TO CHECK OUT AMERICA’S PREGAME” or any other daily Fox Sports 1 shows. That’s somewhat of a knock on the young network, but more so the reality that people have built in habits with the remote and the fact that recommendations don’t come cheap in an era with a million channels, apps, and websites.

I imagine there were greater original content ambitions that were likely shelved when FS1 was unable to broker more advantageous carriage agreements with the big cable and satellite companies. With that in mind, it’s tough to judge a young network that is losing money on its rookie year of output. That said, it was Fox’s decision to go out pre-launch and talk a big game rather than going the slow and steady route that others have taken in terms of expectation setting. That’s part of Fox’s DNA, but frankly they oversold big time and under-delivered and the end result is a network that sports fans largely ignore because it’s easy to do so.

FS1 is still in its infancy, but this is a major issue because A) People are making first judgements that are going to inform their perspective about the network in the long-term. B) Getting more ambitious will cost money and will only increase the scrutiny FS1 draws from upper management and stockholders. C) Other networks such as NFLN and NBCSN still lurk in FS1’s punching class and are believed to be profitable.  This is likely why Fox looked to acquire Time Warner as they’re currently in the tough position of treading water for the rest of the decade making very small incremental progress or rolling the dice with some big moves that would likely lead to larger losses.

So do I have any ideas? Sure I do! Here are six ideas I had for NBCSN that would work for FS1, all of which would probably add to the networks losses, but at least the network would provide a true alternative to yapping about sports in a studio and something worth recommending.

How about a sports trivia game show? ESPN has long since bowed out of that niche and there’s been quite a bit of buzz around Dan Patrick’s Sports Jeopardy on Crackle.

Bring back Pros vs. Joes with Jay Glazer.

How about joining the likes of HBO, Showtime, NBCSN, NFL Network, and ESPN in working with NFL Films on a show?

Produce more documentaries and high quality programming that makes fans recommend something on your network to their friends. FS1 has made a small dent in this space with docs about Mariano Rivera, BJ Penn, and soccer, but nothing has made a breakthrough.

How many months will it take for Katie Nolan to get on a new show?

Here’s the biggest problem facing Fox Sports 1 at the moment – there is nothing on the network that you have to see. Given that FS1’s biggest challenge is breaking the viewing habits of sports fans that have been on ESPN via default for decades, that’s the #1 issue facing the network at the moment.

How would Fox Sports 1 even explain the differences between them and ESPN at this point? Honestly, if you’re an FS1 employee, what does the non-PR/Kool-Aid version (We’re fun!) sound like?

“Well we have different people than they do, with different sets, and in many cases different furniture and graphics, but largely we talk about the same exact stuff in the same order but in a more casual way. Also we have way less live rights in case you like actual games.”

A year from now I sincerely hope FS1 has developed one and maybe even two things I and other can look forward to, recommend, and go out of our way to DVR. Other networks have made that inroad with me over time and it would truly be a shame if two years in, the self proclaimed #1 competitor to ESPN hadn’t mustered up the imagination to do something that was truly disruptive from a programming perspective.

As much as people like to rail on Fox Sports 1 for various shows and personalities, my beef is not what’s actually on the network but rather what’s not on. What’s not on Fox Sports 1 is something truly different than what currently exists over on ESPN.