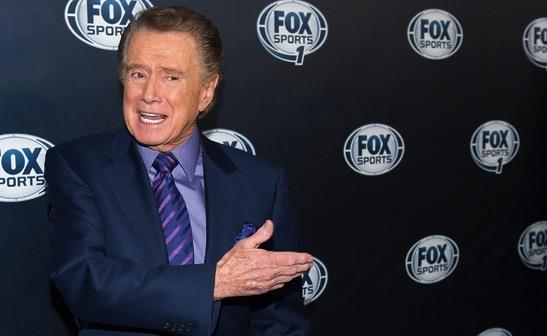 With the first year anniversary of Fox Sports 1 approaching on Sunday, this week is FS1 Week at Awful Announcing.  Over the course of the next seven days, we’ll analyze the highs and lows of the first twelve months at “the one for fun” and what is in the network’s future.  Today to kick off our series, we look at where Fox Sports 1 was a year ago at this time just before launch and why the network lost its first crucial battle in their quest to take on ESPN – the expectations game.

“I think it’s time for ESPN to get a little competition, don’t you?” – Regis Philbin

“If you look at a show like SportsCenter, there’s a seriousness to it that is reminiscent of old pregame shows. We feel like we can come in and give you the same information, but do it in a way that is so much more entertaining and fun.” – Robert Gottlieb, Fox Sports Senior VP Marketing

“It will take us two or three years to create a visible and emotional bookmark in people’s minds to say, ‘I’m going to switch on Fox Sports 1.'” – David Hill, Senior EVP 21st Century Fox

“Fans are ready for an alternative to the establishment, and our goal for FS1 is to provide the best in-game experience possible, complemented by informative news, entertaining studio shows and provocative original programming.” – Eric Shanks, Fox Sports President

Fox Sports made no secret of their goal when launching Fox Sports 1 on August 17th, 2013.

They were going to challenge ESPN and become the #1 sports network in America.

Fox has a history of conquering long-standing empires in the television world.  They did it in broadcast television with the Fox network.  They did it in the arena of cable news with Fox News Channel, which is now in another ratings stratosphere compared to their competition.  And with the advent of Fox Sports 1, they were going to do it in the sports world and take on ESPN directly.

It’s a daunting task where many have failed previously.  But if there’s one company with enough money, power, and influence to take on ESPN it might just be News Corp and Rupert Murdoch.  Murdoch is one of the few individuals walking the planet that can match ESPN billion for billion.  And even before Fox Sports 1 broke out of the gate, the message was clear that they were in this for the long run to challenge ESPN.

Everything about the Fox Sports 1 launch was aimed at providing an alternative to ESPN.  Fox Sports 1 looked past other upstarts NBCSN and CBS Sports Network and set their sights on climbing Everest.

It was seen in the quotes above where executives and talent talked openly about the need for an alternative to ESPN’s monopoly over sports media.

It was seen in their programming choices with Fox Sports 1 not only launching a head-to-head competitor with SportsCenter (Fox Sports Live), but also in sending Regis Philbin up against Around the Horn and PTI (Crowd Goes Wild) and Erin Andrews toe-to-toe with College GameDay (Fox College Saturday).

It was seen in their motto “The One for Fun” and constantly poking the bear by painting ESPN as a stodgy network that sucked the enjoyment out of sports.  In the run-up to launch, Shanks sold prospective viewers by asking, “Do you want to hang out and have nachos with our guys?”

A year later, and it’s apparent that few people have shown that they want to hang out with the Fox Sports 1 gang.  The nachos are all gone.

Regis Philbin, who boasted about providing competition to ESPN, saw his show cancelled within a year amidst dismal ratings.  Fox Soccer Daily and Fox Football Daily, two of Fox Sports 1’s flagship studio shows at launch, were also cancelled.  Fox College Saturday was annihilated by College GameDay in a blowout reminiscent of Alabama taking on an NAIA school.  It was also cancelled after one year.  In fact, only Fox Sports Live and NASCAR Race Hub stand as studio shows that survived Fox Sports 1’s first year.

Given that their targets were set on ESPN, Fox Sports 1’s ratings failing to surpass even NBCSN in Year 1 have to come as a major disappointment.  At this point, Fox Sports 1 isn’t even the #2 cable sports brand when it comes to viewership.  They are a clear #3 behind ESPN and NBCSN.

It wasn’t all bad for FS1 in the ratings department.  They saw big NASCAR audiences that even led Fox Sports Live to beat SportsCenter head to head.  However, those successes were few and far between.  And without live lead-in programming, Fox Sports Live’s ratings dipped into the depressing land of four digits.  The program, and Fox Sports 1’s daily lineup as a whole, has struggled mightily to make an impact on the sports landscape.

I remember a conversation I had with someone at a competing sports network last summer who was bemused by Fox’s bluster in launching Fox Sports 1.  He wondered what FS1 would do when Fox Sports Live drew 80,000 viewers and their much-balleyhooed challenge to ESPN’s flagship show fell woefully short.  How would Fox sell that failure to compete on a nightly basis?  It turns out even that prognostication was optimistic.

And that’s where the expectations game comes into play.  Because Fox Sports 1 was so boisterous before their launch and made a lot of noise about taking on ESPN, the first year at the network has largely been seen as a disappointment.  And given the tepid MLB ratings on the channel this summer, you would have to say awareness of the channel is still worryingly low.

Realistically, Fox Sports 1 was never going to draw significant viewership through the day in their first year.  A much more realistic target for the network would have been to build on Speed’s viewership base, compete on a level with NBCSN, and begin the slow build to becoming a legitimate alternative to ESPN.  With the various rights packages entering the network in the next year, the future is still fairly bright for Fox Sports 1 and they should pull ahead of NBCSN thanks to postseason baseball and college football.

Had Fox Sports 1 kept their expectations low and over-delivered, the narrative regarding the first year of the network would be much more positive.  Instead, Fox Sports 1 talked a big game in building an immediate ESPN alternative and under-delivered.  There was plenty of hype, but little substance.  In that way, the launch of Fox Sports 1 has resembled that of The Shockmaster.

It’s been a humbling year for Fox Sports 1.  And perhaps that’s what is necessary for their long-term future as a network.  Perhaps Fox needed to know just how high the mountain is that they were trying to climb in trying to tackle ESPN’s dominant position at the top of the sports world to realize the true position they are in.  Reaching ESPN and convincing sports fans to make the switch to Fox Sports 1 doesn’t just seem 2 or 3 years away as David Hill suggested before launch, it seems 20 or 30 years away.  Moving into Year 2, Fox would be wise to forget about ESPN and focus on finding their own path forward as a network.