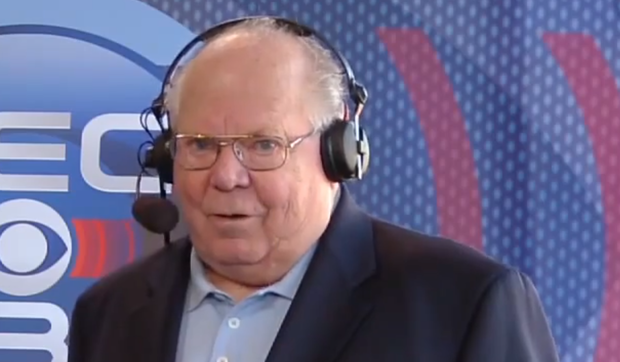 After decades of sports broadcasting, Verne Lundquist still prepares the same way for every game.

The week prior, he talks with his game spotter, scouts the teams he’s calling on Saturday and begins making his broadcast sheet – the indecipherable jumble of names, statistics and storylines from each team that sits in front of him for every game. He prints each player’s information onto shipping labels, going two to three players deep at each position, and shellacks them to his poster board for reference during the broadcast. This tactic, taught to him by Dick Vermeil in the ‘80s, used to involve handwriting everything. Now each piece of information is printed out and cut individually like “kindergarten show and tell.”

It gets easier to call games the more times he sees a team. For instance, the current SEC on CBS crew just finished broadcasting its third game with Alabama and second with Texas A&M. Names become more familiar and the memorization gets easier. Lundquist does make mistakes, however, something his detractors are quick to identify. But he admits his mistakes, and in the high-wire act of play-by-play commentary, those few mistakes are inevitable.

“I understand the criticism of making mistakes, and it’s valid,” Lundquist said. “My first network telecast was Kent State vs. Ohio University … My first telecast ever and I made a couple of mistakes. Well, in 40 years of network TV, I’m still 0-for-the decades. I’ve still not done one without a mistake. You can’t. Every time it happens you feel badly. You don’t want the raised eyebrows, but it happens.”

It’s impossible to capture a life in broadcasting in an hour-long documentary, but “In Your Life,” which airs Nov. 29 on CBS at 1:30 ET, will do its best. It focuses on Lundquist’s most famous calls: Tiger Woods at the Masters, Jack Nicklaus and the 1986 Masters, Christian Laettner’s shot against Kentucky, and the 2013 “Kick-Six” Iron Bowl. The amount of high quality Verne on YouTube could take days to comb through. That portfolio of famous calls might be one of the best and most richest of any broadcaster on national television.

With each passing year and new hallmark moments, Lundquist has maintained Nicklaus’ win at the 1986 Masters was his favorite call, until he changed it to the “Kick-Six” after some heavy consideration.

“After the game, we went back and I started getting a bunch of texts and emails about where that game ranked in my favorite memories,” Lundquist said. “My default position for 30 years has always been Nicklaus in ’86. We’re exactly the same age so there’s probably a generational thing there.”

He then read a column in the New York Post outlining why the 2013 Iron Bowl was the greatest ending in sports history.

“I read that and thought, maybe I should reassess this,” Lundquist said. “It’s tied for No. 1 now with Nicklaus. Everything that came together to allow that moment to happen was extraordinary.”

He always identified with Nicklaus because of their similar age. At 74, Lundquist is slowing down, but only physically. He had a knee replacement surgery and moves slower than he probably did when he called Jack’s sixth Masters win. He suffers from chronic bronchitis from 35 years of smoking but says he has never missed an event, although he has come very close. He doesn’t do anything in particular to protect his instrument – “I can’t imagine what opera singers go through” – but admits the smoking gave his voice some gravel to it. The travel is hard on him now, and is a spot for criticism.

“When I say ‘that’s enough,’ it’s going to be because the airlines drove me to it,” Lundquist said.

(Maybe in the final years of his stellar, five-decade career he can finally get a private plane. How does Uncle Verne – a moniker he embraces and considers a term of affection – not have a private plane?)

But Lundquist is still sharp, still motivated, and while he has no plans of retiring anytime soon, he knows that day is coming and it will be democratic.

“It’s going to be a collaborative decision,” Lundquist said. “It will be me, my wife, Craig Silver and Sean McManus.”

Lundquist, a recent recipient of the Vin Scully Lifetime Achievement Award and a 2007 inductee to the the National Sportscasters and Sportswriters Association Hall of Fame, has called nearly every sport imaginable, including five Super Bowls as the Dallas Cowboys radio announcer. But he still has one event that he wishes was possible for him to call again, if only he could arm wrestle Bob Costas for the opportunity.

“When I was growing up, my role model was Jim McKay, and in part it was because when he hosted Wide World of Sports, he had this warmth about him and the storytelling ability to make you feel for that 90 minutes that there’s no place you would rather be,” Lundquist said. “Because of Jim, I always aspired to do the Olympics. It turned out that my opportunity was three Winter Olympics. If we could get our group that did the three in the ‘90s back together for one last time, I’d be the happiest guy in the world.”

He most likely won’t get another shot at the Olympics, but calling SEC football, The Masters, March Madness and other keystone events has its perks.

Lundquist is known to many for his minimalism when the amazing happens. He is an inviting storyteller and broadcaster during the game, but hearing an “Oh, wow!” from Verne is good enough to signify the moment at hand. He mentions the ability to speak clearly and laying out (not talking) after big moments can be learned – “We have a lot of guys for whom it seems to be an impossible task” – but the lines that come in the greatest moments are left up to experience like Al Michaels’ Miracle call or Verne’s favorite, Scully’s call of Kirk Gibson’s home run.

“Learn to write,” Lundquist said. “Being a capable writer goes with being well-read, and I think being well-read prepares you for this job in vastly significant ways. Be a storyteller. I think you need not concentrate on the minutiae of the craft of sportscasting.”

“I get calls to this day from people saying, ‘My son wants to do that and he knows every stat about the backup shortstop for the Chicago White Sox,’ and I say, ‘It’s irrelevant. It doesn’t matter. Can he communicate? Does he like people?’”

The next generation is on its way, but Lundquist is still thriving. He answers questions with stories. For every conversation, there’s a relevant anecdote. And for 50 years and counting, Verne Lundquist has contributed to some of the greatest sports stories of all time, and continues to appreciate the opportunity to be a part of people’s lives.

“There’s something about the relationship between the people on the air and the people who are watching,” Lundquist said. “And this medium allows people in their homes to grasp the essence of the person who’s addressing them.”