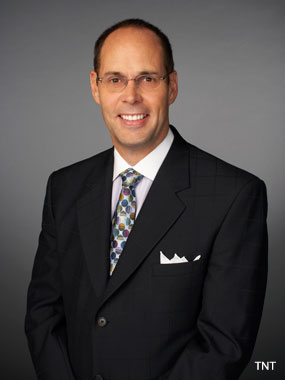 Ernie Johnson goes so far back with Turner Sports it actually pre-dates the start of his broadcast career. His father, Ernie Johnson Sr., was the announcer for the Atlanta Braves when Ted Turner had the outlandish idea to air their games nationally on his WTBS Superstation.

The “Crazy Ted” talk died down once the Braves became “America’s Team.” Ernie Johnson’s son learned early on never to question the drive of his father’s boss.

“It seemed like the more people told (Turner), you can’t do something, the more he wanted to do it,” Johnson said.

So that’s why this year’s NCAA tournament holds extra meaning for Johnson and other long-time employees of Turner Sports. For the first time ever, TBS will carry the Final Four games on semifinal Saturday. They had been exclusively on CBS since 1982.

It will be a landmark moment for Turner Sports. Even though Turner himself isn’t involved in the operation of the networks he founded, Johnson knows what it means to everyone with ties to the man whose name still is on the door.

“It’s huge,” Johnson said. “The reality of it isn’t lost on any of us. You watch this tournament your entire life, but you’re never a part of it. Then to be in that mix and to know that everyone is watching this event. It’s not just sports fans. It’s about fringe fans. They’re not sports fans, but they’re March Madness fans with their brackets. The tournament is one of those events that bring everyone together for a few weeks.”

Johnson has been tabbed to host not only Final Four Saturday on TBS, but also the championship game on CBS. CBS Sports Chairman Sean McManus said the NCAA deal between his network and Turner Sports is a “true partnership.”  It extends to the various announcers and hosts getting their shots to be showcased on the big games.

Obviously, Johnson is one of the best studio hosts in the business for his work on the NBA. He acknowledges there are some differences when his gang of Charles Barkley and Kenny Smith move over to the college side for the NCAA tournament.

There are so many games during the first weekend of tournament, Johnson said it requires a much more “business-like approach” just to keep up, a contrast to the looser atmosphere on the NBA shows. Johnson insists, “We still goof on each other and have our fun.”

“The bottom line, you’re still talking about basketball,” Johnson said. “But it varies here and there. You have to realize you’re dealing with teenagers. Kids make mistakes, they’re learning the game. For some of these kids, it will be the last time they wear a uniform. You won’t be as hard on them as if you were talking about a professional player.”

This is the fourth year Johnson, Barkley and Smith have been involved with the NCAA tournament. Initially, it seemed weird for NBA guys to suddenly parachute into college basketball’s biggest event. Johnson, though, contends that perception has dissipated over time.

Buy Viagra to restore erectile function pills are ideal for potency. Low price and reliable manufacturer. Only we have male and female Viagra at affordable prices for you.

“We’re not just parachuting in terms of not knowing what’s going on,” Johnson said. “We have researchers, and we’re studying and keeping up-to-date throughout the entire season. We’re constantly preparing. It’s not like somebody goes, ‘Hey, it’s Selection Sunday, put your NBA stuff away.’”

Johnson is looking forward to tonight’s games as the tournament moves to Dallas. He knows Turner will be watching the Final Four games on his network.

When asked about what Turner would say about TBS airing those semifinal games, Johnson laughed: “I wouldn’t presume to speak for Ted. But I’m pretty sure he would say, ‘I knew we’d do this and we’ll do more.’”