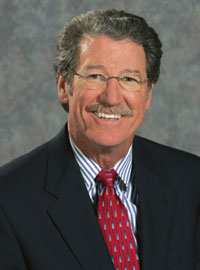 I’ve watched a lot of different sports and heard a lot of different local announce teams over the years.  And I can say without question that Golden State Warriors TV analyst Jim Barnett is one of my favorites.  The 69 year old has worked for almost three decades as an analyst for the Warriors and he is one of the most enjoyable listens working in today’s NBA.  His partnership with Bob Fitzgerald is a highlight during the season when telecasts are syndicated on NBATV. Barnett is old-school in many ways: he’s low on schtick, catchphrases, and pom-pom waving and shoots straight with viewers with his decades of basketball wisdom.  But he also has a good sense of humor and keeps things relatively light.  For an NBA fan on the east coast, he’s almost the perfect late night viewing option if you have League Pass.

That’s why it was such a shock to hear that the Warriors were pushing him out of the broadcast booth after this season.  The team was calling it a “mutual agreement” before the season began and planned to shift Barnett into one of those nebulous team ambassador roles.  But as time passed, Barnett let it be known that he was still interested in announcing.

Warriors fans campaigned for the team to reconsider their decision and keep Barnett in the booth.  The #KeepJim hashtag has been in full force since late March.  The outpouring of support was fitting for Barnett, who had been one of the few consistently good things about a franchise that had seen far more losing than winning over the last 30 years.

The campaign seems to have worked, at least somewhat.  The team confirmed yesterday that Barnett would return to the booth for a limited number of games next season.  While Barnett works select games, another analyst will be added to fill out the schedule.  Barnett responded on his Twitter feed.

To ALL of you who follow and have been so kind and generous with your words: A heartfelt THANK YOU for your support! #overwhelmed

That’s obviously good news for Warriors fans and fans of smart basketball analysis.  Why the team wanted to usher him out of the booth in the first place is a strange situation and reminds me somewhat of Brent Musburger’s situation at ESPN.  Perhaps the team wanted a younger voice to call their games, but why do that when you have someone still clearly at the top of their game who is still popular with your fanbase?  If that’s the case then there’s certainly some age-related questions that need to be asked.  Forcing out one of the most beloved figures associated with your franchise seems like it’s bad for fans, bad for business, and bad for PR.

In a way, this development is encouraging for all sports fans – the campaign to keep Barnett in the broadcast booth was a success in some respect and the Warriors front office is definitely listening to its fanbase.  Hopefully Golden State will do the right thing and allow Barnett to call the full 82 game schedule next season.