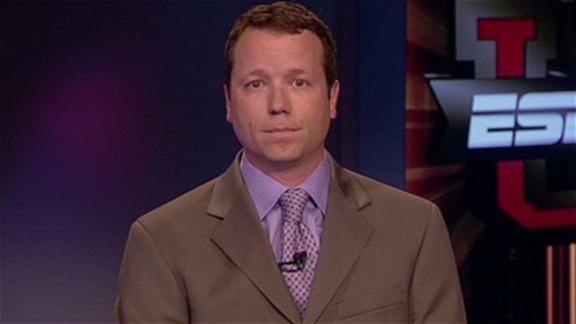 When you were a kid, did your mom ever take away your favorite video game? Were you initially annoyed that your time with the game was taken away? Probably, but you eventually got over it and just threw on some other game or just relaxed and played Madden for a few hours, right?

It’s hard not to see Twitter suspensions like that. We’ve seen them happen a lot in recent years, since the social media site has blown up and become a must-have for any person who wants to reasonably exist in relevant conversation. The most recent example was Keith Law, who got suspended for a weekend from Twitter for defending evolution against Curt Schilling, a sentence that never fails to sound obscenely stupid.

Obviously, though, the most famous iteration of this punishment is Bill Simmons, who was suspended last year for criticizing ESPN’s First Take and eventually got a total suspension this year for things he said on a podcast. We’re just starting to wonder, however… what’s the point?

It’s a lot like that kid getting his one video game taken away from his parent. He or she will make a huge fuss about it that makes everything worse for the parent, and he’ll just use his other toys to complain about the ordeal, anyway. Simmons used his Instagram account during his suspension, Law found ways around it too by posting on his personal blog and Facebook. Somehow, someway, someone will eventually get their message out and it probably won’t be helpful for the network.

The thing is, almost no one is ever on your side if you go the Twitter suspension route because it all seems so pointless. As much as we all love Twitter, we still have the ability to recognize that it’s not that important, no matter how much it contributes to our daily lives. That combination makes us immediately sympathetic to someone getting banned from the service, because it is both important and silly. Unless you’re intentionally trying to drum up buzz for someone or something, there’s no benefit. All ESPN’s Twitter suspension of Keith Law brought them was a lot of questions about double standards and the network favoring an ex-athlete (Curt Schilling) over a non-ex-athlete.

Obviously, ESPN has to discipline employees somehow when they misbehave, just like any other company. But banning an employee from Twitter (especially in the cases of Law and Simmons) makes the company seem stodgy, overbearing and out of touch with today’s media conversation. By suspending Keith Law from Twitter over his argument with Curt Schilling, they brought a thousand times more publicity to that conversation than had they just had a quiet word with him.

So the next time a network is preparing for a couple weeks of us all tweeting out #FreeSimmons (you know it’ll happen again eventually) maybe consider another brand of punishment, because nobody wants to see a sports network look like the heavy.