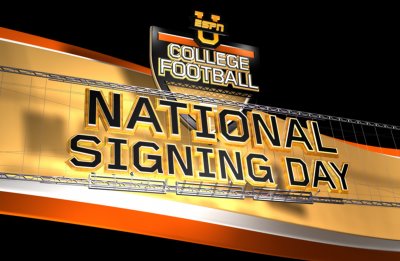 ESPN embarks upon its ninth consecutive year of total coverage of National Signing Day. This is the day in which collegiate recruiting classes are solidified, and the few remaining uncommitted players finally narrow their choice down to one after years of recruitment.

Beginning on ESPNU at 8 a.m. ET on Feb 5, the television marathon continues for 11 hours – on ESPNU for the entire day, available on WatchESPN and simulcast on ESPN2 from 5-5:30 p.m. ET. Broadcasting from ESPN studios in Charlotte, Rece Davis, Dari Nowkhah and a cavalcade of analysts like Tom Luginbill, David Pollack and Danny Kannell will wade through the day, providing analysis and projections, while also airing live school announcements and look-ins with the nation's top programs. ESPNU has 13 on-air player commitments scheduled throughout the day.

Every aspect of the day must be planned and accounted for, so producers like ESPN Senior Coordinating Producer Shawn Murphy have to prepare for this one day for months.

“In some forms [the preparation] starts the day after,” Murphy said. “But it really gets ramped up in January as we get closer to it.”

The producers look at the class rankings and base their decisions for on-site reporters on those. ESPN will place reporters like Tom Rinaldi and Holly Rowe at 12 different schools, interviewing coaches and early enrollees, and providing updates on ESPNU and SportsCenter throughout the day. The usual suspects are represented with Alabama, Auburn and now Florida State, but some different choices will be featured this year. With Tennessee and UCLA having highly rated recruiting classes, along with multiple highly ranked recruits still considering them, they were a must this year. And Penn State, with their new coach and continued recruiting sanctions is still a topic of interest on National Signing Day. Throughout the day, ESPNU will have more than 30 interviews with coaches including Nick Saban, Les Miles, Gus Malzahn, Art Briles and Urban Meyer.

“The schools have been fantastic,” Murphy said. “And the more we're there, the better the relationship is.”

Recruiting coverage has been huge online for years in forums and chat rooms, blogs and websites. But Jeremy Crabtree, senior writer for ESPN.com’s online recruiting site RecruitingNation.com, said that social media has allowed recruiting to become more mainstream. Players can dictate their moves and announce their decisions. They can have more accessibility, which endears fans to them, but can also bring out the obnoxious few that insist upon tweeting their feelings at these amateur athletes.

Crabtree will be part of the ESPN’s online wing of Signing Day coverage, which will include an interactive marathon chat on RecruitingNation.com with recruiting writers and analysts starting at 8 a.m. and going through ESPNU’s television coverage. Throughout the day – at 10 a.m., 2 p.m. and 6 p.m. ET – ESPN3 will carry three 30-minute shows where analysts will discuss and debate the breaking news of the day.

“We want everybody to sit around and watch ESPNU all day but not everyone will,” Crabtree said. “We have the ESPN3 technology where you can take things on your mobile phone and see the news from anywhere out there.”

ESPN first covered National Signing Day in 2006, but the 2010 and 2011 years were the tipping point in popularity. Attribute it to the overwhelming popularity of college football, and the all-encompassing coverage from ESPN. This isn't college basketball. These recruits that sign with teams will be there for at least three years, fans will get to know them, learn everything about them, and normally celebrate their arrival. This is the NFL Draft of college football, except each team – barring a few on scholarship sanctions – can sign upwards of 25 players. A 5-star cornerback from Texas might be the furthest thing from a fan's mind, but on National Signing Day, that player serves as hope for a team and an opportunity for vicious bragging.

“National Signing Day is the one day where every college football fan is interested in recruiting,” Crabtree said. “We try to make sure they can walk away and have their questions answered and feel like they have a good feel on what's happening at their school.”

With 11 hours of television coverage and even more online, something surprising is bound to happen, but ESPN has to be prepared for everything. Players don't schedule their announcements around the convenience of ESPN, and neither does breaking news, whenever that happens. A large part of the coverage is scripted, with set topics at the ready in every possible scenario. If a player chooses Alabama, the analysts can discuss Alabama's future, how this decision impacts the rest of the SEC and the country, and inform viewers who might not follow recruiting as heavily as others.

“You're somewhat flying by the seat of your pants, other times you're not,” Murphy said. “The most intriguing thing is the unknown.”

In some ways, National Signing Day is a circus. Crabtree called it a “sports holiday” for ESPN. It is 11 hours of televised talking about players that have never played college football before. It’s an avenue for 17 and 18 year olds to become temporarily famous by making their collegiate announcement on national television. It is the yearly jubilee day for a major industry based on the coverage of high-schoolers. But as long as people are interested and tune in, ESPN will continue to cover it, always expanding and adding new elements every year.