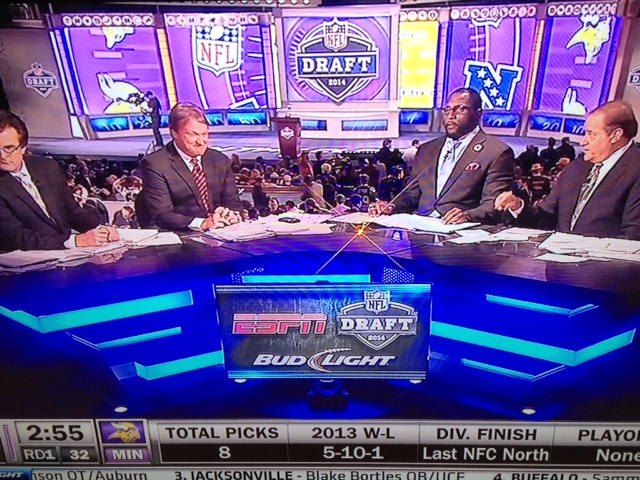 – I feel for Adam Schefter and Chris Mortensen.  Two of the best reporters in the business are hamstrung by ESPN’s edict to preserve the entertainment value of the draft and sacrifice their reporting of substantial news.  An example: before Tampa Bay’s pick at #7, Schefter hinted that Mike Evans was a “main option.”  He turned out to be the pick, but that language was just perplexing.  It was like they were trying to play a game of The $25,000 Pyramid by having us guess what they really meant.  Even with all of the trades that happened in Round 1, it seemed like Mort and Schefty had a smaller presence than they should have.

– Ray Lewis outperformed my expectations as a draft analyst rookie on the set.  This is one of the biggest nights of the year from an NFL TV perspective and a high pressure situation for an analyst being on the air for several hours straight.  Lewis was able to give decent analysis and fresh insights, especially on the defensive players drafted – a nice compliment to Gruden’s QB focused attention.  However, as the night went on, Lewis started using more and more cliches and referred to everyone drafted as a “great kid” and “football player.”

– If Lewis and Gruden are right about the 2014 NFL Draft, then 32 future Pro Bowlers are coming out of Round 1.

– ESPN (and NFL Network) made it a priority to not tip picks throughout the draft.  But before a pick had even been made, the original draft spoiler himself struck.  Chris Berman has always tried to be cute by dropping “hints” before selections that told you whose name was going to be announced by the commissioner.  Before Jadeveon Clowney went #1 overall, Berman made reference to Texans owner Bob McNair graduating from South Carolina.  Coincidence?  I think not. At least ESPN was able to placate fans throughout the rest of the evening by doing a good job not showing spoilers from the green room or elsewhere.

– The chemistry on set between Kiper, Gruden, Lewis, and Berman didn’t seem to be there throughout the evening.  Sometimes there were guys interrupting one another, sometimes there were periods of awkward silence following a lengthy and winded Berman soliloquy, for whatever reason it was just a little off all night long.  ESPN had found a pretty nice groove with the smaller main draft set and it didn’t seem like that same rhythm was there tonight.

Perhaps the faster pace of Round 1 (10 minutes between picks) affected the flow on the main set, especially with Berman at the helm.  To be honest, I didn’t find myself facepalming after any one-liners from Chris Berman (except for a strange Arthur Blank-Home Depot joke during the Falcons pick) because of that high tempo and an action packed first round.  So maybe it all evens out in the end.

– The Bud Light Blue Room is not a room.  It’s a corner of the stage.  Why has nobody else noticed this?

– Before the 32nd pick in the draft, when the Vikings traded up for Louisville QB Teddy Bridgewater, Jon Gruden said, “Bridgewater’s a guy we haven’t talked about enough.”  Gee, I wonder why that could have been.  Maybe Bridgewater went unnoticed because you were fawning over Johnny Manziel for every single pick!

Gruden’s love of quarterbacks is well known, but he took it to unforeseen levels on Thursday night with Johnny Football.  As the first round went on, it reached the point of comic relief.  From Pick #1 all the way to Pick #22 Jon Gruden acted like he was getting paid per Johnny Manziel mention.  It actually made me think the two had some sort of secret financial arrangement we didn’t know about.  Gruden actually said this while the Bucs were on the clock at #7:

“If they pick Johnny Football, I might have to reapply for my season tickets. I would love to see my hometown Bucs take Johnny Football, we need a kid like this to bring juice back to our organization.”

And this went on for all night.  You knew ESPN was going to obsess over Manziel, especially if he lasted for more than half of the first round.  And like a lot of the network’s celebritizing habits, ManzielMania turned into gluttony very quickly, dominating the entire telecast.

Yes, it was a fun story to follow the drama.  Yes, it was exciting to finally see the Browns pick him after a night of several trades.  But ESPN did go overboard on this one story, as they are prone to do.  That’s why Teddy Bridgewater, and a whole lot of other interesting stories, flew under the radar.

– I’ve gone on record plenty of times saying that showing random tweets on screen from random celebrities is one of the silliest trends in broadcasting.  But Donald Trump?  Really?  Let’s never do this again, ok, Bristol? 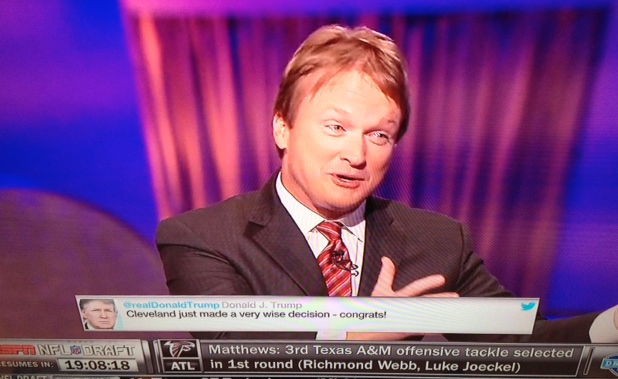 Overall Grade: As for the actual draft, it was as fun of a first round as I can remember thanks to all the trades and surprises taking place.  Perhaps that excitement bumps up ESPN’s coverage a tick because the network was able to capture those storylines as they unfolded in real time.

Kiper, Gruden, and Lewis all had their moments to shine.  However, Lewis’ inexperience showed as the night went on and Gruden is on his way to Cleveland as we speak to make sure the pillows in Manziel’s hotel room are properly fluffed.  And after so many years, you know what you’re going to get from Chris Berman and Mel Kiper.

I’d definitely argue that ESPN’s coverage was too Johnny-centric, but in fairness it was legitimately the major story we’ll all remember from tonight.  It’s not like it’s out of character for ESPN to focus most of their attention on the biggest celebrity athlete of the day.

But what really makes ESPN’s coverage of the NFL Draft stand out is the flawless production.  From the video packages to the rhythm that’s established as the draft progresses to the information that’s shown to viewers on screen it’s all done in the highest of quality.  And that rang true from Pick #1 to Pick #32 on Thursday night.  Overall, ESPN earns a B.