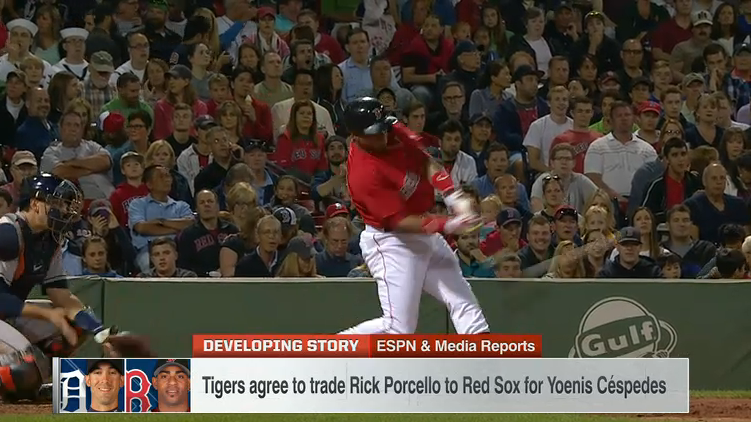 “The moral of the story is, I chose a half measure when I should have gone all the way.  I’ll never make that mistake again.  No more half measures, Walter.” – Mike Ehrmantraut, Breaking Bad

Mike’s “half mesaures” speech to Walter White may be one of the most simple, yet profound scenes in one of the great television shows that’s ever existed.  And while the story is brutal and awful and the lesson for Walt one with life or death consequences, the message is one that can across the spectrum – half measures can never cut it.

ESPN’s current sourcing policy is a half measure.  And it’s time the network goes all the way and does the right thing by doing a better job in crediting outside sources.

When ESPN announced their new sourcing policy in 2013, we applauded the decision.  The network finally clarified (about 30 years too late) whether or not they were actually reporting a story or whether it was news broken by another outlet.  The new categories were “ESPN report,” “Media report,” and “ESPN and Media reports.”  This new policy came after a rather embarrassing episode in which an ESPN producer admitted to Jay Glazer on Twitter that he was being used as a source for ESPN’s reporting – an unconsciable admission of guilt that ESPN was piggybacking on the work of others and passing it off as their own.

But now, it’s clear that the new policy also falls well short of what should be elementary standards.  On far too many occasions, reporters and outlets who actually break news aren’t being given credit for the work they do by Bristol.  Instead, once ESPN can get a piece of a story, they immediately become lumped together as a part of the mysterious “media reports.”  It’s better than using everyone as a source and just outright stealing scoops, yes, but it’s a half measure.  In fact, the phrase “media reports” has now become just as much of a laughing stock as “sources” was for ESPN.

Congrats to @BNightengale on his name change to Media Reports. Very popular name these days.

So, when ESPN says "According to ESPN and media reports," this means ESPN read or heard an item somewhere else and is passing it on?

Great job by my buddy @Andy_Staples on breaking Will Muschamp story. As others have pointed out, must now change name to Media Reports.

ESPN’s sourcing controversies have been a major storyline once again this week.  It began, ironically enough, with an attempt to do the right thing and credit Ken Rosenthal for a story.  The only problem was it was a fake Rosenthal account where they got their information.  It continued with Jay Glazer (the real one) calling ESPN “lying bastards” for elbowing in on his scoopage with Johnny Manziel starting for the Browns.  Quite the accomplishment to check both those boxes off the improper sourcing scorecard.

But perhaps nowhere is the confusing and inconsistent half measures of proper sourcing at ESPN seen more clearly than in the news of Melvin Gordon turning pro.  The Wisconsin RB revealed his intentions in an interview on The Dan Patrick Show.  Soon thereafter, SportsCenter sent out a tweet blaring “THIS JUST IN” without mention of DP.  However, the ESPN NFL account did manage to credit Patrick. 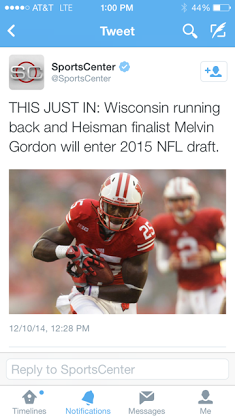 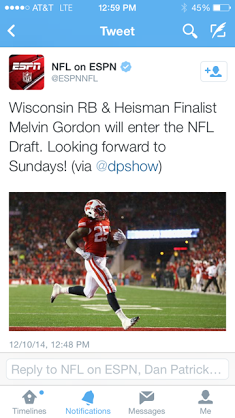 And if that wasn’t enough, the network also was inconsistent in crediting Patrick on television according to our followers:

@myoder84 On Sportscenter and via SC twitter page, they were just saying "reports"

“@myoder84: Not near comp/TV. Has ESPN credited Dan Patrick for the Melvin Gordon news anywhere?” Linda Cohn just did so in the 1pm edition

To disguise Gordon’s announcement on a popular national radio program as “reports” in any medium is just plain dishonest to other outlets and more importantly, to consumers.  When there’s this level of disparity as far as ESPN’s attribution goes, it’s fair to ask whether there really is some kind of policy in place at all.

It’s usually at this point in this narrative where someone undoubtedly always asks, “who cares who gets the story first?”  In some respect, that’s a worthwhile question.  And when it comes to the transaction wire, where dozens of reporters are reporting the same news within minutes of one another, it really shouldn’t matter that much who can type on their smartphone fastest and best.

But the truth is reporting and accurately attributing stories to reporters who break them does matter.  It matters to the reporters who are seeing their work not given the credit it deserves.  It matters to the individuals who are trying to make a name and a career for themselves.  It matters to people like Doug Brown, who saw no credit from ESPN for his report at Cleveland Scene on another Manziel-related story earlier this year when other media conglomerates like Sports Illusrated, Fox Sports, and NBC Sports managed to do so.

It matters because of integrity and honesty.  If we can’t trust ESPN to accurately report and give credit where it’s due… where else might we not be able to trust Bristol?  Mistrust in media is like a virus – it spreads.  Maybe it’s “media reports” one day.  Maybe it’s “SEC bias” the next.  And when it comes to reporting, or any other matter, it’s solely on ESPN’s shoulders to win back the trust of skeptics.

Ask yourself this question – why do no other sports media outlets have the constant turmoil around sourcing attribution that ESPN does?  Sure, Bristol is the self-proclaimed worldwide leader and has the biggest target… but Fox, NBC, CBS, Sports Illustrated, and Turner are also multi-million dollar corporations who break a lot of news.

Why don’t we see the same controversies at those places?  Why is Fox Sports never in the headlines for their writers or television shows stealing scoops?  Why isn’t CBS raked over the coals for trying to hide who broke what?  Why is it always ESPN who’s caught up in this tornado of suspicion and accusation?

The answer is rather plainly obvious – because those other outlets realize it’s very simple to give proper credit to who breaks news.  And the ironic element of all of this is that it’s really not that big of a deal in the grand scheme of things.  And yet, ESPN constantly makes attribution a big deal with their inconsistent policies that run rampant with paranoia.  ESPN’s deathgrip over the sports world will not be broken if they credit Jay Glazer by name for getting a scoop.  They’ve even done it before!

That’s all the rest of the media world asks of ESPN – just try to do the right thing.  You’re never going to bat 1.000 and be perfect in giving every reporter the right amount of credit every time.  But just try.  No more games.  No more “ESPN and media reports.”  Just be honest with your competitors, honest with yourselves, and honest with viewers.  No more half measures.