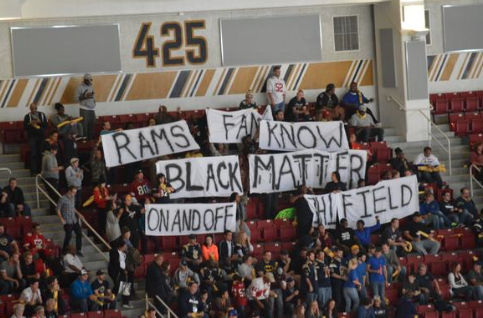 A week ago, the troubling scenes of Cardinals fans clashing with a group of individuals protesting the ongoing events in Ferguson, Missouri revolving around the shooting death of Michael Brown received nationwide attention.  With Monday Night Football in St. Louis for Rams-49ers, Ferguson protestors again made their presence known at the game.  Everywhere except on ESPN airwaves, that is.

Sarah Sprague at Kissing Suzy Kolber chronicled the Ferguson protests at the Edward Jones Dome both inside and outside the stadium as a part of a larger organized protest on Monday and ESPN’s lack of attention towards them.  Here’s a brief selection of vision that captured the protests at the game…

Outside the Rams #mnf game!! In front if the ESPN TRAILERS. #fergusonoctober pic.twitter.com/PXSnXkud4j

I certainly didn’t see any mention of the protests by ESPN while watching some of the game last night and a quick look through social media shows that it was all quiet on that front.  (You can bet that if ESPN had paid any homage to Ferguson protestors on the game broadcast that it would have received ample positive and negative feedback.)  Now, if ESPN did mention the protests happening and we all missed it, we’ll certainly update this post if need be.

Another intriguing tidbit in this question is the fact that ESPN.com published an AP news wire article about the protests at the game, but now the link is dead.  Why they would remove the story is puzzling.

ESPN’s central focus always has been and always will be the game, but the network hasn’t shied away from at least acknowledging current events in the past.  Take the 2014 World Cup and promises made that the network would mention social unrest and events in Brazil happening on the ground during the tournament:

Of course, ESPN had plenty of time dedicated to the World Cup outside the games when news would be discussed.  It’s not quite a direct comparison to one Monday Night Football game.

It’s a very, very delicate situation for broadcasters when sports and society mix in this way.  There are two very distinct schools of thought – one being that the focus should remain entirely on the game as an escape, the other being that when sports and real life intersect, we should not hide from it.  The protests at Monday Night Football are certainly a news story, there’s no denying that.  The question is whether or not ESPN should have mentioned it happening during real time.

To be honest, ESPN could have at least given the protests a passing mention at the very least.  Mike Tirico is one of the most skilled broadcasters working today and someone who could handle a delicate situation like that with the proper care.  Nobody would be asking ESPN to make the protests their lead story or have them dominate the game coverage as that would just be impractical.  The play by play doesn’t have to turn into a Bob Costas essay.

But the morning after, it gives the impression that ESPN was trying to avoid the issue whether they actually were or not.  Even if ESPN didn’t want to raise tensions by showing protests on camera and risk showing a Cardinalsesque conflict to a nationwide audience, their presence could, and probably should, have been acknowledged.

UPDATE: Here’s a statement from ESPN on the attention given to the situation in St. Louis and protests at the game…

“Our MNF production team monitored the story all day and we had a dedicated crew on the ground in St. Louis if the situation warranted reporting. Our crew did not see or hear chants of protest during the game.”