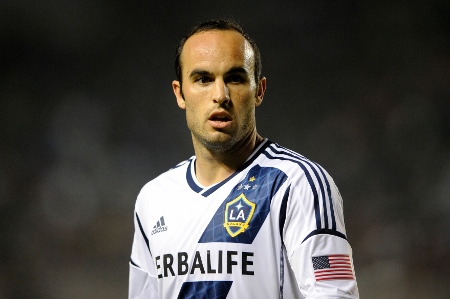 ESPN has gained a huge victory and the World Cup hasn’t even started yet. With Landon Donovan a shock omission from the USMNT roster, he was an attractive option for not just ESPN, but also Fox Sports and any network looking to offer serious World Cup coverage.  If you’ll recall, Donovan was the #3 overall pick in our World Cup Broadcast Fantasy Draft.

With Donovan in Los Angeles and Fox taking MLS and World Cup rights soon, FS1 was a viable alternative.  However, the USA’s all-time leading goalscorer has indeed signed with ESPN to be a studio analyst for the tournament.

Interestingly enough, Donovan will have a “particular focus” on the USA’s group games, which could provide good TV if LD has some honest things to say about Jurgen Klinsmann’s tactics.

Landon Donovan, widely considered the best player in United States Men’s National Team history and the star of the past three FIFA World Cup squads (2002, 2006 and 2010), will be part of ESPN’s coverage of the upcoming FIFA World Cup in Brazil. Donovan will contribute analysis from ESPN/ABC studios in Los Angeles. He will make his debut today during ESPN’s two-hour FIFA World Cup Preview (3 p.m. ET).
The all-time U.S. leader in both goals and assists will preview and analyze the tournament with a particular focus on the U.S. team’s three opening round matches: June 16 vs. Ghana; June 22 vs. Portugal; and June 26 vs. Germany. He will contribute to pre-, halftime and post-match coverage, editions of SportsCenter, World Cup Tonight and other shows.
“Adding Landon to our ESPN roster just before the World Cup is a coup because he knows the United States team better than anyone having played such a huge role in its success, especially at this event,” said Jed Drake, ESPN senior vice president and executive producer. “Landon is also one of this country’s biggest sports stars and we believe that he will help attract even more fans to our month-long coverage.”
Added Donovan: “I am excited to be joining ESPN’s coverage of the 2014 World Cup from Los Angeles, and I look forward to working with the talented ESPN broadcasters to provide unique insights for our amazing US Soccer fans.”
Donovan, who was part of the final cut in May when the 23-man U.S. roster was set for Brazil, is the all-time leader in goals and assists with the U.S. National Team, scoring 57 goals and adding 58 assists in his 157 games. He has played in 12 World Cup games and scored five career World Cup goals, both U.S. records. A seven-time Honda Player of the Year and four-time U.S. Soccer Male Athlete of the Year, Donovan won both awards in 2009 and 2010.

It’ll be an interesting set up to see how Donovan fits in chemistry-wise with the rest of the ESPN crew seeing as how he will be on another continent.  It’s also a no-brainer for ESPN.  A ton of fans are going to be interested in what Donovan has to say about the USMNT after not making the trip to Brazil.  Will he hold back at all or will he let loose with all guns blazing?  It’ll be fascinating to watch either way.