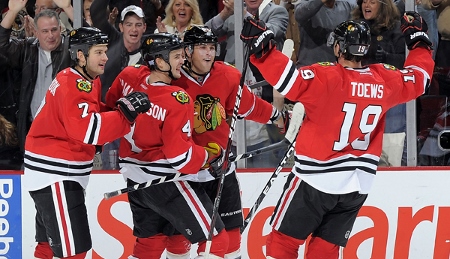 The National Hockey League chose to move on from HBO and 24/7 this season in favor of a new deal with Epix. The premium network — mostly famous for standup comedy and reruns of movies, but with a burgeoning sports documentary unit — is not subscribed to by nearly as many homes as HBO. That created a situation in which both the NHL and Epix had to figure out a way to reach more people, even beyond what HBO reached, to get this new series out there.

It appears the league and network will keep their promise, as the details for the series — creatively titled Road to the NHL Winter Classic — have come out. The show (the Winter Classic-based season, as there will also be one for the Stadium Series game in February) will premiere December 16th on Epix and chronicle the Washington Capitals and Chicago Blackhawks. But [TV Pitchman voice] that’s not all.

The series will also debut live on the NHL app, the Epix app, NHL.com, Epix.com, NHL team websites and apps, oh and their Facebook pages, too. If you’re a hockey fan, you won’t be able to trip without falling into a way to watch this show. The same strategy will be put in place for the Stadium Series show, which features the Los Angeles Kings and San Jose Sharks.

Frankly, 24/7 got stale for me over a few seasons. I’m looking forward to seeing what the league and Epix — and the return of original producer Ross Greenburg — bring to the series, if you can call it a continuation of an old series. The show certainly won’t be left wanting for ways to watch it.