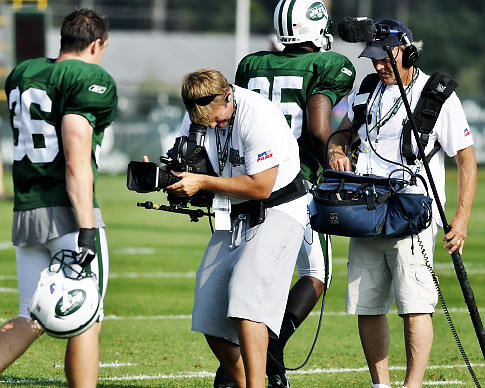 Amazon isn’t the only major corporation flirting with the idea of using drones in order to enhance its product.

Per a source with knowledge of the plans, the NFL’s in-house media conglomerate plans to use drones during production of this year’s Inside Training Camp series on NFL Network.  While not a done deal yet, the plans are in place to use remote-controlled hovercraft to obtain TV images of practice.

PFT’s Mike Florio says that said devices are “presumably far cheaper” than the cablecams we’ve seen hovering over pro sports games for over a decade, and there’s no doubt they would offer more to operators and viewers, since they’re able to be fully controlled by whoever has the remote.

This is actually something the Golf Channel has been toying with for over a year, but since the drones they’ve tinkered with are loud they’ve caused problems on tour. Noise is less of a concern on NFL practice fields.

But ESPN’s Paula Lavigne notes that safety and legality questions have been raised regarding the use of these contraptions for entertainment and commercial purposes.

The Federal Aviation Administration has been issuing cease-and-desist orders to drone operators it believes are violating the law. The issue hit the sports world in March when the FAA admonished a crew that flew a drone over the Washington Nationals’ spring training facility; however, the FAA told “Outside the Lines” it has never issued a cease-and-desist order directly to a sports team or league.

Drone advocates say the federal laws are being misinterpreted, and until the FAA comes up with specific regulations for drones, the agency can’t stand in their way. They’ve been bolstered by a ruling in March by a federal administrative law judge who tossed out a $10,000 fine the FAA had levied against a commercial drone operator in Virginia who had shot footage of a college campus, saying the FAA had no authority over small unmanned aircraft.

Lavigne notes that UCLA’s football program has been using these devices as a coaching tool, and Bruins head coach Jim Mora is a big fan. That dual purpose would seem to make this a no-brainer at NFL training camps, especially if the NFL is using this as a test run for in-game use in the future.

First, though, those potential legal quagmires will have to be tackled, and broadcasters would have to find a way to deal with what Lavigne says is a 20-to-30-minute battery life.

Still, it’s probably only a matter of time before drones become commonplace at pro sports stadiums. And then we’d have the All-American trifecta, with those scary-ass machines being used to kill people, watch sports and drink booze…