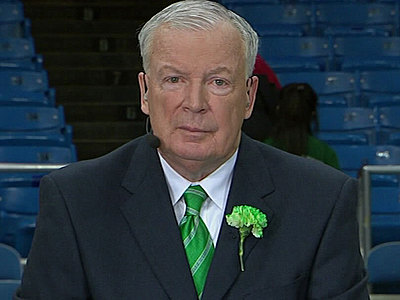 Digger Phelps is abruptly leaving ESPN.  The former Notre Dame Fighting Irish head coach and Bristol mainstay announced last night during the network’s coverage of the NCAA National Championship Game that it would be his last day on the air at ESPN.  Phelps had worked at ESPN for 20 years.  Here’s the video of his announcement:

Various ESPNers tweeted their own personal tributes to Phelps after the news broke.

I've known the great Digger Phelps for 30 years. Mentor, friend, and a treasured part of the rich fabric of the game. He made GameDay.

Wish my friend Digger Phelps the best in his retirement and the next phase of his life. Digger has made a huge impact on communities 1/2

From south bend to Memphis to New Orleans. He's been a great teammate. Honored to call him a friend & excited to see does in his next 20yrd

The Silver Fox signs off. Best of luck, Digger Phelps. Such a pleasure to work with. Made hoops Saturdays fun.

Phelps’ announcement certainly took the college basketball world by surprise as it happened at a time when everyone was focused on the national title game and there was no hints beforehand that it might happen.  (UPDATE: Ed Sherman reports Phelps’ contract was not renewed, which adds intrigue to the timing of it all.)

It’s hard to think about ESPN’s college basketball coverage without Digger Phelps.  Although his highlighter gimmick may not be as notable as Lee Corso’s mascot heads, the two are equally synonymous with their neck of the woods at ESPN.  Over the course of two decades, both have been face-of-the-network type personalities at ESPN.  Phelps is 72 and just coming off his second battle with cancer, so it looks like this might be it for his television career.  He’ll certainly go down as one of the most recognizable on-air personalities in ESPN’s history.